Why doesn’t Travis Green have a new contract? 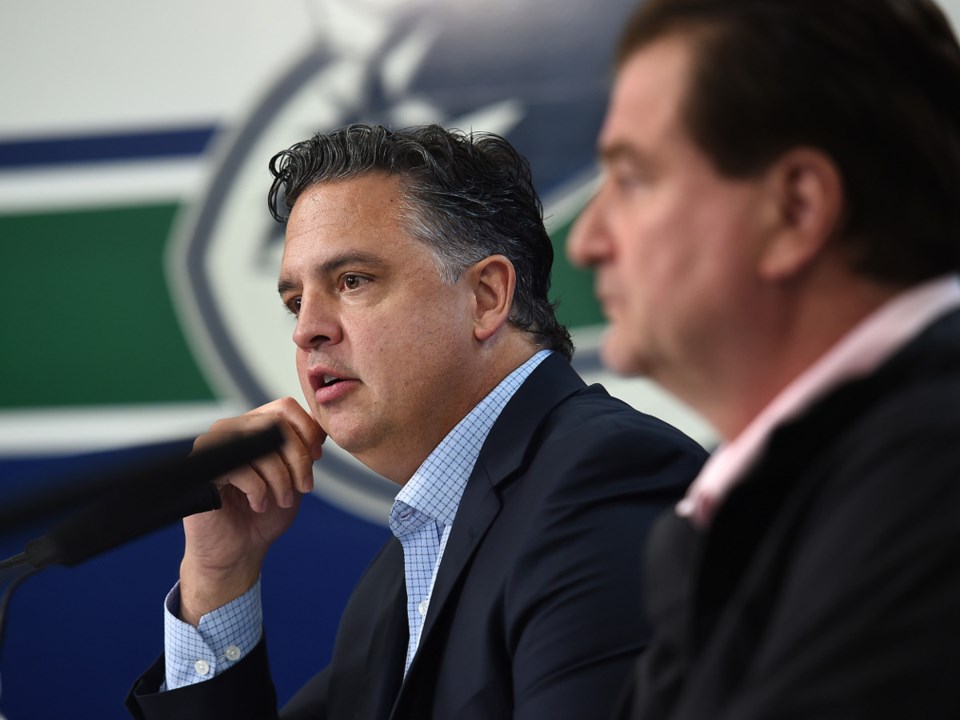 As the 2020-21 season is drawing to a close, Travis Green still doesn't have a new contract from Vancouver Canucks GM Jim Benning.Dan Toulgoet / Glacier Media

Travis Green’s contract expires at the end of this season.

That’s a tough spot for any NHL head coach to be in, particularly one coaching a team that is missing the playoffs for the third time in four years. Green has been the bench boss for the Vancouver Canucks since 2017 and got the Canucks to the playoffs last year but was unable to repeat the feet with a depleted team this year.

Every time GM Jim Benning has been asked about Green and his contract situation, the response has been the same: he and the team’s management like Green and want to get a deal done. So why hasn’t he been re-signed yet?

According to reports, Green was offered a new contract earlier in the season but it evidently wasn’t anywhere close to enough to get the deal done. There hasn’t been any movement or new offers since.

Just as Benning has remained consistent when asked about contract negotiations, so has Green.

“I’ve said it from day one that I’m not going to comment on my contract situation. I’m not going to start doing that now,” said Green. “Jim and I have always had a great relationship...From the first day I got here, I wanted to coach this team through the rebuild and get to a spot where I thought we were getting some good young pieces and had a bright future and I still have the same feeling.

“Jim has said the same thing, that he wants me to coach the team and we’ll see where it goes.”

"This comes from above Jim Benning."

If Green wants to return and Benning wants to return, what’s the hang-up? There’s a sense around the Canucks that it may not be entirely in Benning’s hands.

“My assumption is this comes from above Jim Benning, that this is an ownership decision to wait and see and make that decision at the end of the year,” said Ray Ferraro in an appearance on the Donny and Dhali show. “I think it’s a mistake, in my opinion.”

The Canucks have been careful with their financials over the last year, cutting costs off the ice with layoffs and on the ice with backloaded contracts that cost them less this season. To a certain extent, that’s understandable given the lack of revenue this season with no fans allowed in Canadian arenas.

Benning even hinted that money might be an issue before the season started.

"We want to kind of take a look at the financial landscape of the whole business here as we keep moving forward, but our intention is to sign Travis to an extension so he's part of our group here moving forward," said Benning at the start of training camp.

While it can be tough to see a team pinching pennies with their coaching staff — there’s no salary cap for coaching costs — there’s a certain logic to it.

Consider the following hypothetical scenario: what if the Canucks extended Green and owner Francesco Aquilini chose to fire Benning and hire a new GM in the offseason? One of the first things most new GMs do is look to hire a new head coach to put their own stamp on the team.

Contracts for NHL coaches are guaranteed, meaning if they sign for three years, they’ll get paid for all three years, even if they’re immediately fired. That would mean Aquilini and the Canucks would be on the hook for the full length of Green’s new contract, as well as paying for a new head coach. If Aquilini is looking to be frugal, that would be a tough pill to swallow for the multi-billionaire.

"Where are you finding a better coach?"

According to Ferraro, this isn’t an area to pinch pennies.  The former NHLer and long-time analyst was effusive in his praise for Green’s work with the Canucks.

“Where are you finding a better coach? Look at this roster over the last couple of years and can you say this team hasn’t improved? Or that this team’s younger players haven’t always competed? I think they out-kick their coverage all the time,” said Ferraro. “I think he’s a very, very good NHL coach and if he’s not employed here, he won’t be unemployed very long.”

Green’s willingness to put young players in a position to succeed deserves praise.

This season, he put Nils Höglander in the team’s top-six on the first day of training camp and kept him there all season despite some growing pains along the way.

“When I take a look at myself personally and how much I've enjoyed playing the game this year surrounded by this group of guys and especially under Greener,” said Hamonic. “He's a really good coach in my opinion and he's let me have a role and I've been able to run with it.”

"I'm a much better coach today."

“I think every year you coach, you have an opportunity to improve,” said Green. “Over the years in Vancouver, I’ve improved every year and have become a better coach every season and this year’s no different. When you go through challenges and adversity, sometimes you grow even more in those situations than when you’re having success. When I look back at this season and when it finally ends, I know I’ll be able to look back and say I’m a much better coach today than I was coming into this season.”

According to hockey statistician Micah Blake McCurdy, there may be some numbers to back up Green’s assertion that he’s improved every year. His isolated impact model takes into account the impact of a coach, which means we can see what a coach’s impact is as well.

By this model, Green has improved his impact on both offense and defence over his four-year tenure. This season, his influence has made the team’s shots 1.3% more dangerous than the average NHL coach, while shots against have been 2.0% less dangerous than average. 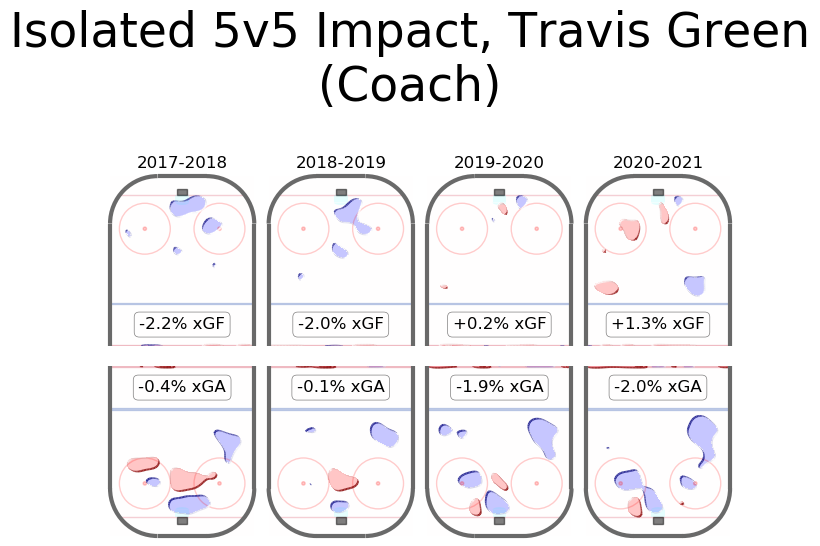 Those may seem like marginal gains, but they’re significant in this context and among the best impacts among coaches in the league.

That’s not to say that Green is a perfect coach. As he readily admits, you always need to be improving as an NHL coach. You can’t afford to be stagnant.

Perhaps Green is too reliant on veterans in defensive roles and has been hesitant to use skilled players in the team’s bottom-six. Green is the one who reportedly wanted Jay Beagle and Antoine Roussel, though he didn’t sign them to their bad contracts, and exiled Sven Baertschi to the AHL because he doesn’t kill penalties.

In the big picture, however, Green has done the best he can with the players he’s been given. He deserves a chance to see this through.

Jim Benning followed in the footsteps of his mentor, Peter Chiarelli, and built the Edmonton Oilers
Feb 26, 2021 5:39 PM
Comments