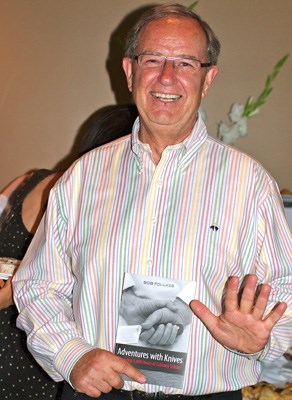 The Hired Belly has a confession: he's a bandwagon jumper, a latecomer to the Harry Potter fan club. So when we first heard about The Unofficial Harry Potter Cookbook (Adams Media, $23.99), we were non-plussed, as the Brits say. That, and the rekindling of less-than-fond memories of the English "cuisine" of my youth.

Resistance was futile, however, and now I've been seduced by Dinah Bucholz's witty and clever compendium. And not a moment too soon as the final Harry Potter and the Deathly Hallows Part 2 hits theatres this week. The cookbook is a must-have for any would-be muggle kitchen-wizard longing to recreate such hallowed delicacies as Treacle Tart (Harry's fave dessert), Aunt Petunia's roast pork loin, Hagrid's Rock Cakes, Bangers and Mash (as served to Dumbledore's Army) or Kreacher's French Onion Soup.

Bucholz's take on the Potter culinary scene is refreshingly American, but it also serves as a primer for those unfamiliar with more esoteric specialties, such as haggis (from Nearly Headless Nick's Deathday party, minus the maggots) and kippers.

She even takes time to explain how to make a "Proper Cuppa" (tea) and doesn't forget to hail Spotted Dick and Knickerbocker Glories.

Thankfully missing are recipes for Bertie Bott's Every Flavour Beans (spinach, liver and tripe-"A risk with every mouthful") and, sadly, claims my Partner in Calories, chocolate frogs.

Aside from being extensively researched, well laid out and packed with info both within and well beyond the realm of Potterdom, this unofficial Muggle tome also turns out to be a good read, especially if you're Potter inclined, starting out with Good Food with Bad Relatives, a detailed reveal of Mrs. Dursley's considerable kitchen prowess.

This is one of the handiest cookbooks to come along in a while, with no shortage of fanciful distractions for Potter fans of every age.

Bob Foulkes is a different kind of kitchen wizard, although there were moments in the last few years when he would have happily traded chefs' whites for Harry's wand.

One of the more senior folks to have graduated from Pacific Institute of Culinary Arts' six-month diploma program, the 60-plus-year-old Foulkes wrote Adventures with Knives: Surviving 1,000 Hours of Culinary School. It's a well written, candid and entertaining account of his experiences from the first day he set foot in the door to the moment he walked out-with no firm plans for his newly honed skills other than to cook for friends and (as it turns out) do some worthy charity work. The book also gives credit where credit is due to PICA's team of talented senior chef-instructors, a few of whom (such as Julian Bond, Patrice Suhner and Tim Ellison) have been fixtures on Vancouver's restaurant scene over the years.

Foulkes' story adds up to an invaluable diary, especially if you're an aspiring culinary student-of any age. Even if you're not, you'll find this account of one man's search for "what's next?" in life an inspiring read. Available at Barbara-Jo's Books to Cooks and PICA.