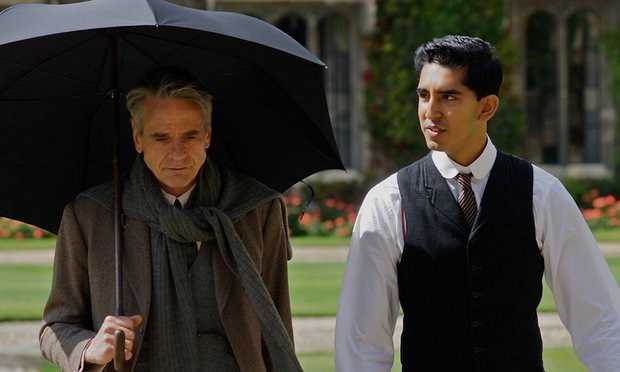 Jeremy Irons and Dev Patel star in The Man Who Knew Infinity, the untold story of math prodigy Srinivasa Ramanujan.

Following in the footsteps of Oscar-nominated film biographies about Stephen Hawking and Alan Turing comes The Man Who Knew Infinity, the untold story of math prodigy Srinivasa Ramanujan, a largely self-taught mathematician who went from poverty in India to a fellowship at Cambridge during the First World War.

However, this film’s too-conventional treatment of its extraordinary subject — and lack of emotional focus — equates to less potential for success during awards season and at the box office.

Without a degree, Ramanujan (Dev Patel) is more or less unemployable in his native Madras, despite letters of reference and notebooks full of brilliance. He finally gets a job as a lowly clerk who has no need of his abacus, which catches the attention of his boss, the first to encourage him: “You have been alone in your mind your whole life.” Stuffy colonial overseer Stephen Fry recommends an acquaintance at Trinity College.

It takes some time before famed professor G.H. Hardy (Jeremy Irons) takes Ramanujan’s letter and sample theories seriously. He initially writes them off as a hoax, a prank played by his colleague Littlewood (Toby Jones). But once convinced, Hardy sends for Ramanujan immediately.

His new wife (Devika Bhise) is heartbroken but understands. “I was told you love numbers more than you love people.” His mother points out that Brahmins are not permitted to cross the sea. It is 1914.

At Cambridge, Ramanujan encounters the very tree under which Newton discovered gravity. He also bumps into the insidious racism of the British academic system of the time, not to mention dietary restrictions and new, uncomfortable shoes to replace his sandals.

Most irritating to Ramanujan is the fact that Hardy has him spend all his time attending facile classes and making proofs, the legwork of math, instead of expanding on his theories and realizing his dream of publishing. As letters from home fail to make the ocean journey and the First World War takes hold of the college, things start to fall apart.

Ramanujan is the presumptive hero, but this is Irons’ film. He gets the best lines and the lion’s share of audience interest, from the moment that his character, a confirmed bachelor, calls his collaboration with the young genius “the one romantic incident of my life.” Patel’s character is less fleshed-out, despite having all sorts of variables to deal with, including violence on campus, racial slurs from his professors and fellow students, a crumbling relationship back home and a strained working partner in Hardy, not to mention a potentially life-threatening condition. Emotionally, Patel barely scratches the surface.

Writer-director Matthew Brown keeps it simple, but even those of us who barely skated through high school math are left wanting more explanation of Ramanujan’s influence. A line at the end of the film mentions pioneering theorems about black holes, but his character only hints at patterns and beauty in mathematics and the relationship between equations and god. A little more math magic and less by-the-numbers, please.

The Man Who Knew Infinity opens Friday at Fifth Avenue and International Village.