Cowboys, drag queens and bearded ladies — these are just a few of the unique subjects Vancouver’s Rosamond Norbury has photographed during her career. And a new documentary from Sharon McGowan captures it all.

Bearded Ladies: The Photography of Rosamond Norbury documents her life and career from her early days renting space in the back of a store called Pow-Wow on Cordova Street and shooting ads for Vancouver Magazine and Western Living to her photo installation of the same name at the 2012 Queer Arts Festival.

“We would use the street as our studio,” Norbury says in the film while sitting on the stoop of the Greedy Pig, the former location of Pow-Wow. “We had some really, really fun times.”

The film, which screens at the Vancouver Queer Film Festival, Aug 18, touches on themes of gender, sexuality and female leadership.

“I’ve always found her to be an absolutely fascinating and engaging character and I always thought she’d make a great biography,” explained McGowan of her inspiration for the film.

Norbury’s Bearded Ladies exhibit serves as the centerpiece of the film, featuring women wearing facial hair and posing as male personas for the first time. McGowan says one of her favourite scenes is when the women see their new bearded looks for the first time. 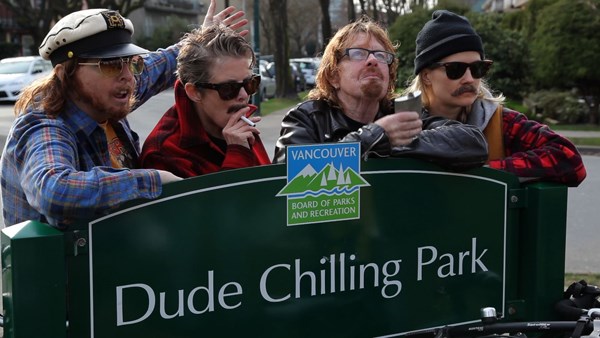 “Their hands fly up to their faces and they kind of start laughing uncontrollably and then all the things they say afterwards are really wonderful,” McGowan says.

Norbury has been a pioneer in the field of photography, tackling unique subject matter and paving the way for women in the arts. She was part of the first class of women to be accepted to the graphic arts program at the Vancouver School of Art.

“She’s a trailblazer and she was a trailblazer in her work. All the photography that she’s done has really broken a lot of boundaries,” says McGowan.

She gained attention for her photography of rodeo cowboys, culminating in the book Behind the Chutes: The Mystique of the Rodeo Cowboy. She moved on to capturing the transformation of drag queens in Guy to Goddess: An Intimate Look at Drag Queens with author Bill Richardson.

It was through her time documenting the drag world that Norbury began to explore her own gender identity. She tried performing as a drag queen and wearing facial hair in public. Now she has two alter egos: drag queen Rose Bush, and gay man Rod Bush.

“It’s a little bit peculiar, but I do it with a good heart and with fun in my soul,” says Norbury.

The film shows her transformation into Rod, a homoerotic photographer whose work has been displayed at the Grunt Gallery in Vancouver. Norbury says Rod allows her to be an observer in places that she wouldn’t be able to otherwise.

“If you’re a middle-aged man, you are wallpaper, you are absolutely invisible, you’re not noticed, which is brilliant as a voyeur,” Norbury says.

McGowan hopes that the film will help people gain a greater appreciation for how Norbury plays with gender identity.

“Playing with gender is something that’s empowering and not scary,” she says. “It can be fun and we should open our minds to that kind of thing and be more accepting.”

“It’s just really bubbly, like a really kind of sweet look at gender not hard hitting and serious. Basically it’s the way I approach life,” Norbury adds of the film.

The film also explores Norbury’s sexuality, following her participation in a Human Library as the title Omnisexual Photographer. With the Human Library people volunteer to be books that others can “check out” to learn about diverse life experiences.

“I’ve had meaningful and sexual relationships with men and women and with a transgender person,” explains Norbury. “So I say, it’s big, it’s omni, I do it all!”

Norbury recounts the first time she revealed her sexual orientation, confiding in her oldest friend Keith Wallace, a writer and curator whom she met in high school.

“He said to me, ‘Never be ashamed to be anything you are,’ and I’ve always held that dear.”

Norbury is happy with how the film captures so many aspects of her life and work.

“It reflects my seriousness as an artist but it also says that I’m up for a good time. I don’t take myself too seriously, I like to have a good laugh,” she says.

She hopes that other than introducing people to her work, the documentary will also encourage viewers to be more self-accepting and open.

“Don’t be ashamed of who you are, enjoy your life and don’t self-censor,” she says. “Open yourself up to the possibilities, you never know what will happen.”