There are so many sacred cows slaughtered in The Book of Mormon: The Musical that it’s a wonder the Queen Elizabeth Theatre isn’t knee-deep in (metaphorical) blood. 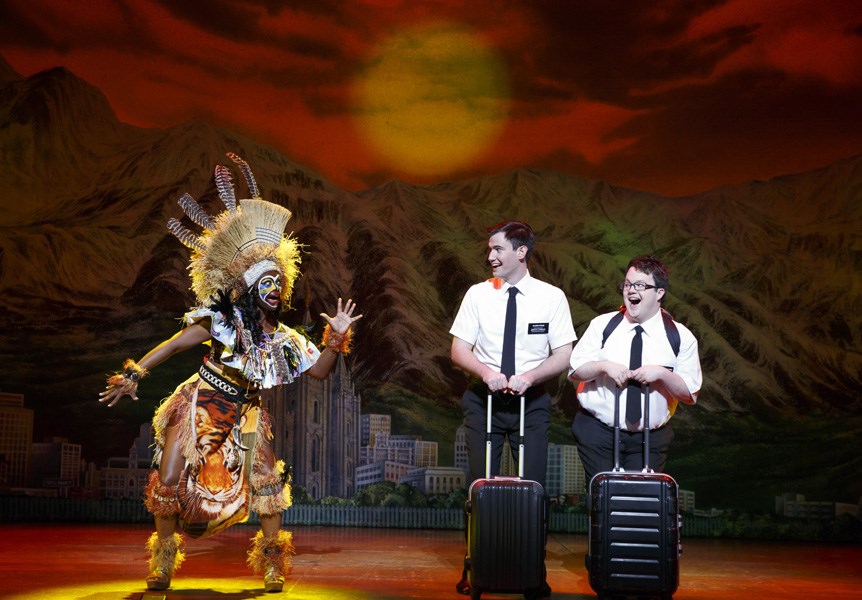 The Book of Mormon: The Musical casts its enjoyably offensive charms on Queen Elizabeth Theatre audiences until Sept. 4.

There are so many sacred cows slaughtered in The Book of Mormon: The Musical that it’s a wonder the Queen Elizabeth Theatre isn’t knee-deep in (metaphorical) blood.

Mormonism is made to look completely ridiculous with founder Joseph Smith receiving a message from an angel in 1827 that God had buried, in Rochester, NY, golden plates on which he had inscribed a sort of addendum to the Old and New Testaments. It spoofs an almost glow-in-the-dark Jesus who says, condescendingly, to one of his Mormon missionaries, “You’re a dick.” It sends up ragtag Ugandan villagers who appear to be making a joyful noise when they dance and sing “Hasa Diga Eebowai” but which, it turns out, means “F*** you, God.” It lampoons gays and those who think homosexuals can be “cured” by simply, like a light switch, turning it off (“Turn it Off”). It even gets a laugh out of a great hulking black man who, believing he will be cured of AIDS, goes off to “f*** a baby.”

Written by South Park creators Trey Parker and Matt Stone, with music by Robert Lopez, it’s lewd, crude, irreverent and funny if you like adolescent dysentery, fart and scrotum jokes.

But eventually it makes a good point: all religions are “made up” so what’s the harm in doing some tweaking to make, say Mormonism, fit the circumstances? In the case of The Book of Mormon, the Ugandan circumstances include poverty, AIDS, female circumcision, violent warlords, bugs and vipers of all sorts.

And the production values are through the roof. A fabulous art nouveau frame around the set depicts the Salt Lake Temple with the angel Moroni standing aloft. The choreography is witty, the singing is excellent, the music is huge and the lyrics are clever. It’s an event bountifully punctuated with the f-word.

The leads in this Broadway Across Canada touring production are tremendous. Ryan Bondy is Elder Price — a gung-ho, self-obsessed, would-be missionary who only wants to be stationed in Orlando, Fla. but instead ends up “companioned” in Uganda with Elder Cunningham (Cody Jamison Strand), an overweight, nerdy little guy who confesses to “making things up.” These are two very strong, very confident performers with Bondy knocking everyone dead with “You And Me (But Mostly Me)” and Strand belting out “Man Up.”

Arriving in Uganda, Price and Cunningham meet sweet Nabulungi (Candace Quarrels), the chief’s daughter, who recognizes that something has to change and is willing to take a chance with Mormonism. The baptism scene, performed behind a sheet, is obviously a stand-in for sex, with both parties — Elder Cunningham and Nabulungi — getting all hot and bothered.

The show is full of pop culture references so if you’re not up to date (and I’m not), you miss out on a lot of the fun.

I’m not sure what to make of The Book of Mormon. It’s a fabulous production of really strange material: religious satire that pokes fun at Mormonism, homosexuals, Ugandans, God, musicals and anything that gets in the way. And it gets away with it. And has audiences leaping to its feet with standing ovations.

Looked at in another light, in spoofing Mormonism it actually spoofs all organized religions, which are, after all, human constructs to make us behave ourselves.

I question, however, whether the point has to be made in a way that dips below sophomoric into crude/silly. A scene, for example, with a bunch of strap-on penises penetrating various orifices with great gusto, is only funny in a college skit sort of way.

The fact that the show is wowing audiences all over the place — well, the Brits are less impressed — and that it’s winning awards, says more about audiences than it does about Mormonism.

But then, really, The Book of Mormon: The Musical isn’t really about Mormonism.

For more reviews, go to joledingham.ca.