In Oleanna, it really troubles me how much playwright David Mamet is able to manipulate me to want John, the professor, to strike Carol, the student who wrongly accuses him of sexual harassment. 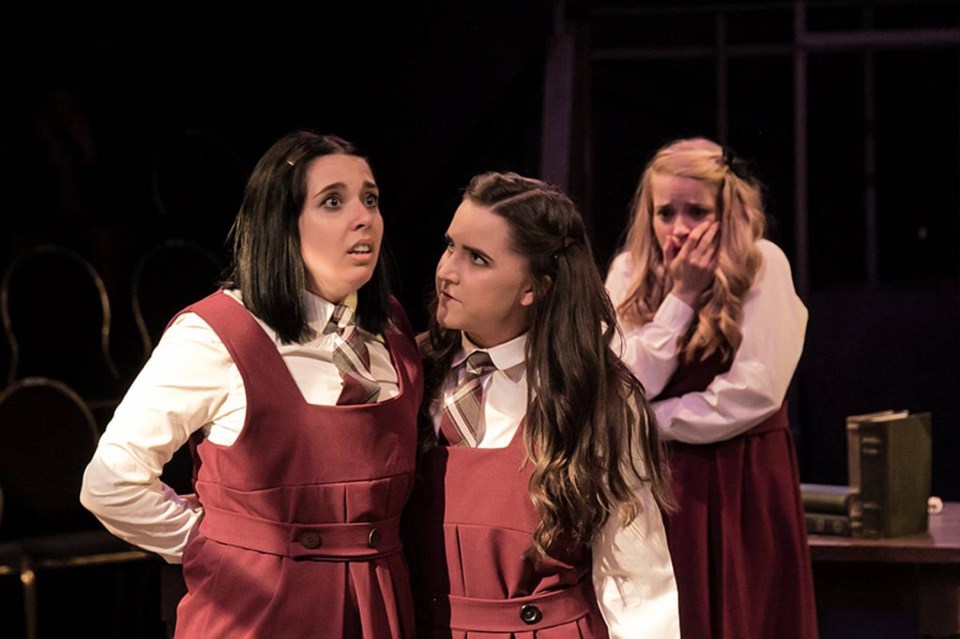 Left to right: Tiffany Anderson, Laura Geluch and Anais West get up to no good in Ensemble Theatre Company’s production of The Children’s Hour.

In Oleanna, it really troubles me how much playwright David Mamet is able to manipulate me to want John, the professor, to strike Carol, the student who wrongly accuses him of sexual harassment. In The Children’s Hour, presented by the Ensemble Theatre Company (ETC), playwright Lillian Hellman makes me want to smack adolescent Mary Tilford (Laura Geluch) before she destroys everyone around her.

But children aren’t born evil so why is wicked Mary so screwed up? Hellman doesn’t give us much in the way of a backstory except for a few possible clues: Mary doesn’t live at home with her mother and father — indeed, we don’t know if she even has living parents or siblings — and she’s an unhappy boarding student at a classy girls school run by Martha Dobie (Alicia Novak) and Karen Wright (Stephanie Elgersma). Mary has her rich grandmother Amelia Tilford (Barbara Ellison) wrapped around her little finger and it is to her grandmother she flees when she runs away from the school and begins spreading rumours about the “unnatural” relationship between Martha and Karen, who is engaged to Dr. Joe Cardin (Ryan Scramstad).

An interesting aside: The Children’s Hour opened on Broadway in 1934 and was produced as Hellman had written it. Although it was delicately couched, there was no mistake that the rumoured “unnatural relationship” between Martha and Karen was lesbianism. However, when Hellman adapted the play for film in 1936, she had to conform to the standards of the film industry, which, at the time, prohibited any obvious reference to homosexuality. Hellman altered the plot so that the rumour was that Martha had had sex with Karen’s fiancée. That was permissible under the Motion Picture Production Code while lesbianism was not.

The play has echoes of Ibsen: a well-meaning but small-minded, puritanical busybody is a major player in this tragedy. And, smacking of Hedda Gabler, there’s an offstage gunshot.

One wonders if an actor ever really gets out from underneath a role as nasty as Mary. Geluch does an admirable job of bullying Mary’s school friends, manipulating her doddering-but-influential grandmother and throwing all-out tantrums when Mary appears to be running out of convincing lies. But Geluch must feel the waves of hostility night after night coming off the audience. You do just want to smack her/Mary.

Barbara Ellison, stepping in for Rosie Frier-Dryden who was suddenly taken ill, does an admirable job as the easily duped grandmother; Scramstad, as Dr. Joe, is so delightfully fresh, boyish and pragmatic, it seems possible that the young doctor will save the day; Walters does well as the wildly dramatic drama teacher; and director Raine, stepping in as Mrs. Tilford’s maid Agatha, is so clipped and no-nonsense it’s obvious that had Agatha raised Mary, the bad girl might have been a good girl.

Elgersma and Novak, as Karen and Martha, are at the heart of the play and they both reflect refinement, sensitivity and decency. Elgersma is almost physically transparent in her unhappiness and confusion in the final scenes. Hellman throws a little twist in at the end — something that Mary, who’s not only wicked but frighteningly observant — picks up on.

The cast is completed by Anais West, Anthea Morritt, Tiffany Anderson, Mika Laulainen and Meegin Pye as the schoolgirls, and Maxamillian Wallace as the Grocery Boy.

Perhaps not as relevant as it once was, The Children’s Hour nevertheless is riveting and a reminder that rumours ruin lives — not only the lives of the victims but of everyone involved.

For more reviews, go to joledingham.ca.

The Children’s Hour is at Jericho Arts Centre until Aug. 6. Details at ensembletheatrecompany.ca.