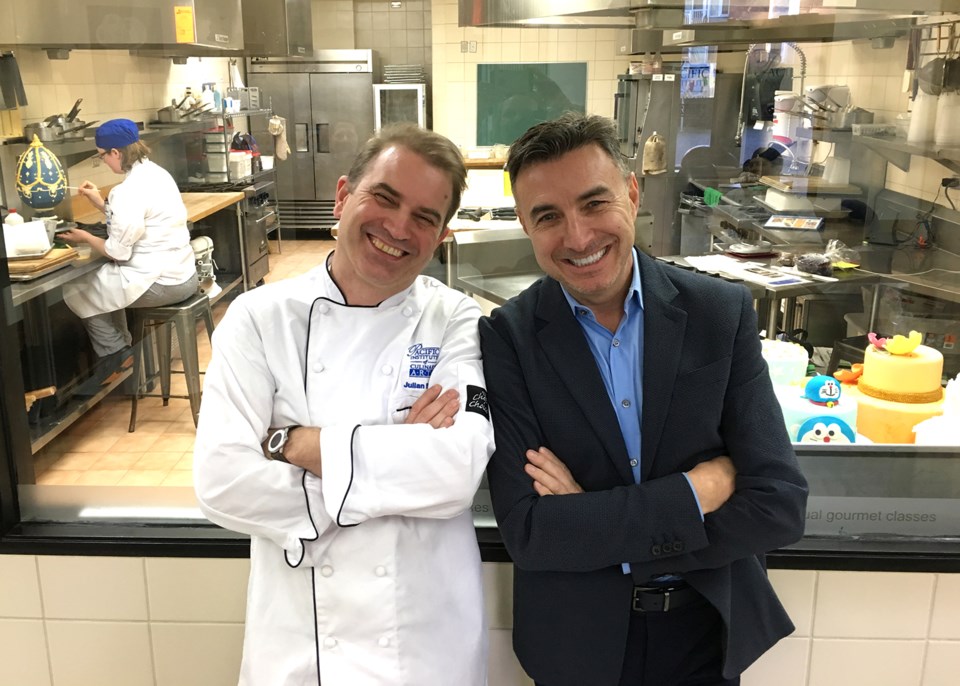 Julian Bond, the vice-president and executive chef at Pacific Institute of Culinary Arts, is excited that, as the new majority shareholder, Yves Potvin is bringing his successful entrepreneurial experiences to the Vancouver school.Martha Perkins

Yves Potvin first arrived in Vancouver on a $200 bicycle, having pedalled 5,500 kilometres from Montreal to the Pacific Ocean.

Three decades and two highly successful food companies later, he left Vancouver for a well-earned holiday and ended up in a wheelchair.

Now he’s back on his feet, both physically and entrepreneurially, as the new majority owner and president of the Pacific Institute of Culinary Arts.

Potvin is the man who introduced veggie dogs to North America. First experimenting in his Vancouver kitchen, he had found a way to make meatless “meats” much more appealing to cook and eat. Soon, his products were commandeering the vegetarian section in grocery store coolers.

In 2001, he sold what’s now called Yves Veggie Cuisine but he didn’t stop tinkering with ways to feed the growing appetite for vegetarian food. He launched his second business — Gardein — in Richmond in 2003.

In 2014, he sold Garden Protein International to Pinnacle Foods. He stayed on for a year and then decided that while he was far from wanting to retire, he was ready for a break.

“Having a business [like Gardein] that grows 30 to 40 per cent is very time-consuming and tough on the body,” he told the Courier in the midst of a non-stop day of meetings at PICA. “When you build two businesses, you’re always on the go and on high adrenaline. When slow down, your body says it’s time to take care of yourself.”

His body gave him that message loud and clear when he developed debilitating sciatica during a flight from Vancouver to Europe on his first real escape from being a businessman. Not able to walk unaided, his body forced him to stop its constant forward motion for the next three months.

“It was an awakening that your health is the most important thing,” he says today. “As they say, wealth is your health.”

Now he feels his batteries are recharged and he’s full of plans to help revamp and re-energize the school whose 3,000 graduates can be found in many restaurants in Vancouver and around the world.

Bond joined PICA in 2008 and became a minority shareholder seven years ago at the invitation of founder Sue Singer, who was a very hands-on president. “We called her Mom,” Bond says. “She was a big part of this school.”

Last year, Singer decided to sell her shares and retire to Ontario, generating a lot of interest from potential new partners. The sale was finalized in June 2017 but the new ownership was only recently announced.

Bond thinks Potvin is a natural choice to lead the school into the next phase: Potvin is a chef who understands food and food culture, he lives in Vancouver and he has that entrepreneurial drive that gets things done.

That business perspective is important, Bond says, both for the school and its graduates. “You have to know the true value of a lime. This industry is in your pennies. You only make money by counting your pennies, not your dollars.”

Already Potvin is coming up with ways to invigorate both the school and the student-run Bistro 101 restaurant, including adding a new outdoor patio and a cart for student-made ice cream sandwiches.

Other possibilities include expanding its wine program and adding training for service staff, nutrition, food manufacturing and a variety of restaurant related pursuits such as blogging.

On top of the six-month and one-year program, the school is also looking at a three-month advanced program so chefs can upgrade skills without having to take a long time off work as well as a wider range of short-term cooking classes.

“We want to bring the serious amateur back here,” he says.

An exchange with a culinary school in China is being considered, along with a renewed focus on specialty cuisine. Potvin isn’t about to turn everyone into a vegetarian but he is aware of the huge growth and popularity of vegetarian restaurants.

Bistro 101, with its enviable marinaside view of Granville Market, could also host a more varied spectrum of events. Sustainability will get a renewed focus in day-to-day practices, such as banning plastic straws, as well as new technologies.

This all makes for a busy schedule for Potvin. As much as he is tapping into his extensive business expertise to make changes that will strengthen PICA’s presence in Vancouver’s food scene, he’s also cognizant of the lessons he learned when he pushed himself too hard. He plans to continue to travel and bring back new culinary ideas and best practices and but the idea of retirement is anathema to him.

“Lots of my friends who are retired are bored,” he says. “An entrepreneur can’t just stop overnight. I hope at 85 I’m still active and doing something.”

Having Bond as a managing partner is perfect, he says. “It’s the best of both worlds.”