The Cinematheque’s biennial 24-Hour Movie Marathon remounts March 30 to 31, pulling together die-hard cinephiles with others who want to test the outer limits of sleep deprivation.
Mar 28, 2019 2:13 PM By: John Kurucz

It may not be on the same level as a polar bear swim or Grouse Grind, but feats of strength will be required out of movie buffs this weekend just the same.

The Cinematheque’s biennial 24-Hour Movie Marathon remounts March 30 to 31, pulling together die-hard cinephiles with others who want to test the outer limits of sleep deprivation. 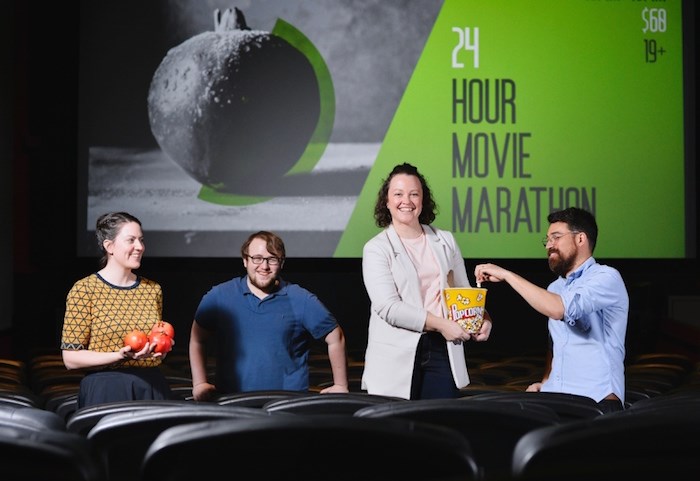 Cinematheque staffers Lizzie Brotherston, Isaac Renert, Kate Ladyshewsky and Shaun Inouye while be in need of serious caffeine this weekend as they attempt to push through 24 hours’ worth of continuous films. Photo by Jennifer Gauthier

Running 10 a.m. to 10 a.m. over successive days, the flick fest will include somewhere between 12 and 14 films from across the globe that are aligned under a specific theme. Secrecy, however, reigns supreme here, as neither the films nor the unifying theme will be disclosed until it’s go time.

Started in the early ’90s, the exercise in attrition took a nap for a decade-plus until being revived in 2013. That year, the theme was movies about movies while the 2015 edition played on the concept of time. The 2017 festival was held under the banner of urban living. Each festival acts as a fundraiser for the Howe Street movie theatre, and this year is no different.

As for the format, films won’t run in complete succession and breaks will be allotted for meals and stretching.

The Courier spoke with Cinematheque programming associate Shaun Inouye to get the low down on how to prevent a slow down while the films go down.

This kind of event likely attracts a very particular crowd. Who shows up to this kind of thing?

There’s definitely a core audience at the festival that is the Cinematheque’s core audience as well. They are die-hard cinephiles who put their entire trust in what we do and how we curate. For them it’s an opportunity to have a crash course in cinema over a 24-hour period. For other people, it’s a case of trying to test their mettle, people who are asking themselves, “Can I do this?”

A movie festival has a lot of parallels with a song, book or even a standalone film in that it requires pacing and rhythm to be properly executed. How do you establish that pace to keep people engaged for a full 24 hours?

We approach it as though we’re curating a mixtape. It needs to have the right ebb and flow to it and it’s going to need peaks and valleys. We’re also cognizant of the overnight graveyard slot that runs overnight into the early a.m. and we’ve got to make sure that we program accordingly.

The films are being kept secret and so is the theme. What nuggets of information, if any, can you disclose?

[The films] totally run the gamut. There will be canonized art films in there because that’s our bread and butter. But there are total left-field oddities, low-brow fun and a lot of forgotten gems. The themes are usually broad enough that they can still enable films from different eras, genres, nationalities and modes.

In the event someone falls asleep, what happens?

We leave them be for sure. People are for sure nodding off at times, but a lot of them, if they feel they are losing it, they will come out to the padded benches in the lobby and take a quick powernap. Some people already know a film or they dislike a film, so they set their alarm and get a 90-minute recharge for the rest. That being said, it is discouraged for people to come and go. The idea is that once you’re here for the marathon, you’re here.

I’m not going to sugar coat it, they are in rough shape by the morning. We try to keep them energized and engaged throughout. After a screening of Army of Darkness [in 2017], we had a spontaneous dance party afterwards to get people engaged, up on their feet and moving around a bit. We definitely want people to succeed. The number of people we start with is not the same number that we end with. We usually lose a couple dozen.

What advice do you give attendees to help make it through until the end?

I would suggest coming well-rested already. We will have some complimentary snack breaks, but come prepared for 24 hours outside of your comfort zone. Bring whatever sustenance you particularly need to make it through something like this. Be open to making friends there, too. Cinema is already a communal thing but this is like that to the nth degree.

The festival is a 19+ event and tickets are available for $60 online at thecinematheque.ca.

— This interview has been edited and condensed.