Meet a woman tackling addiction, grief, and recovery on the DTES

Loretta explained to me that when she decided to take her life into her own hands, to get herself better, she suffered a heart attack that left her hospitalized. It was a heart attack that she said was the result of years of drugs and drinking.
0
Oct 24, 2018 11:27 AM By: Rachel Way 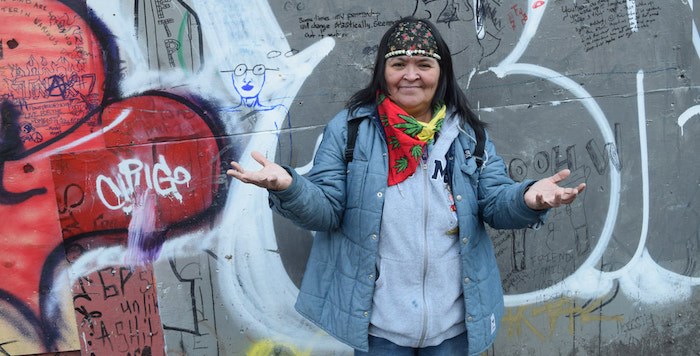 Walking along the streets of the Downtown Eastside with one of my teachers, Mr. Hall, by my side, I looked through the streets, taking it all in. Despite the fact that I have been through this area many times, it still takes me by surprise how not only immensely different these people's lifestyles are, but also reminds me once again how fortunate I am to have what I have.

Most people along these streets on this day were either busy finding a new place to sit, busy to get to work or looking for their next fix. As my eyes were searching the streets a friendly smile caught my eye. A woman smiled and said hello, ​and right away I was taken with her kindness and happy nature. She was easy to talk to, and open, and, I soon learned, incredibly courageous. She told me her name was Loretta and after talking with her a few minutes I realized just how inspiring she was.

As I always do, I asked Loretta if she would be comfortable sharing her story. She was enthusiastic about the idea, explaining to me that it's so important to talk about these things, to talk about life. Not only to connect with other people and educate them on what happens in the area that she lives, but also that it was important for her. That it was a big part of her healing process and being able to get sober, to get better.

Loretta explained to me that she has lived on the Downtown Eastside for the last 5 or so years. She now lives in the local women's shelter where she has been able to find a safe, warm space to sleep. She told me about her life, about her ups and downs and her journey. I was amazed at her courage to share, her openness and her incredible strength.

Loretta told me that she grew up on a reserve up in Bella Bella, where she said life consisted of plenty of drinking and drugs. "You got drunk everyday," she explained; there were no rules and fun as that may be for a while, you eventually have to be hard on yourself. Loretta eventually moved down here to Vancouver for reasons that she did not share with me, but she found a life with a community, with friends to look out for her. But behind the friendship and the good times, there was plenty of hardship, plenty of struggle and plenty of desire for a different life for herself.

While lying in a hospital bed recovering from this major medical emergency, Loretta received the news that her sister had passed away. The news Loretta shared "pushed her over the edge," and she just couldn't take it and relapsed to an addiction far stronger than the last. I could only imagine the pain that Loretta must have been going through; having two sisters myself I could only imagine what she went through. My heart went out to Loretta, I really felt for her. But despite the struggle, hardship, and pain that Loretta went through, I had met her at a turning point in her life.

Loretta told me that it was time for her to get better. Her strength, her will, her "I will do this" attitude was so empowering. Recovering from the loss of a loved one is difficult enough as it is, let alone dealing with rehab on top of it. For many, recovering from addiction is an incredibly painful process that makes you physically and mentally exhausted and ill. Knowing this, yet still being so ready, so excited to take it on really inspired me.

Realizing and accepting that you have a problem is never an easy thing to do, let alone actually seeking out the help to recover. As we parted our ways, she left with a hug, held onto my hands and said "hey we've got cold hands, but warm hearts." I left thinking to myself just how right she was about herself and admired her positive outlook.

Loretta taught me that it is so important to share, so important to be there for one another, to listen, and help each other. She taught me how being open and honest is scary, and hard and takes courage, but there is nothing wrong with being honest and to look for some love and support. So often we try our best to be perfect, to make our lives appear to be picture perfect and flawless. From our Instagram accounts, to how we present ourselves, even right down to how we see ourselves.

But at the end on the day, there is nothing wrong in having the courage to say "I have some flaws but I'm working on it" or "I am not okay and I need your help right now."

As much as many of us are reluctant to do, it is so important to put yourself first sometimes and be your own biggest advocate.  Just as we want to be there for those we love, they want to be there for us as well. So many people are fighting battles you know nothing about and you never know who you may be helping by being honest, open, authentic and real. We are all flawed, we all have things we are working on and that is okay. But not only do we need to find the strength to be real with others, but also real with ourselves. We are all, no matter if were eight or 80 are learning and growing and there is nothing wrong with that. But just like Loretta, realizing we have something we need to work on is not a flaw in our character, but rather the opposite. I hope that you can all learn from Loretta, just like I have, the importance of sharing, being real, and putting yourself first sometimes.