Vancouver-born author Amber Scorah was a third-generation Jehovah's Witness, and when the Armageddon came as promised, she and all her fellow believers would be saved. Then she stopped believing.
0
Aug 14, 2019 1:59 PM By: Lindsay William-Ross

As a teen in Vancouver in the 1990s, writer Amber Scorah says she would steal moments away to get her hands on classic novels at local bookstores. While the bestsellers were off-limits to the girl - they were considered "worldly" - she figured no one in her community would bat an eye at her taking a break from her regular required reading to dive into the worlds of D.H. Lawrence, Charles Dickens, or other canonical novelists. 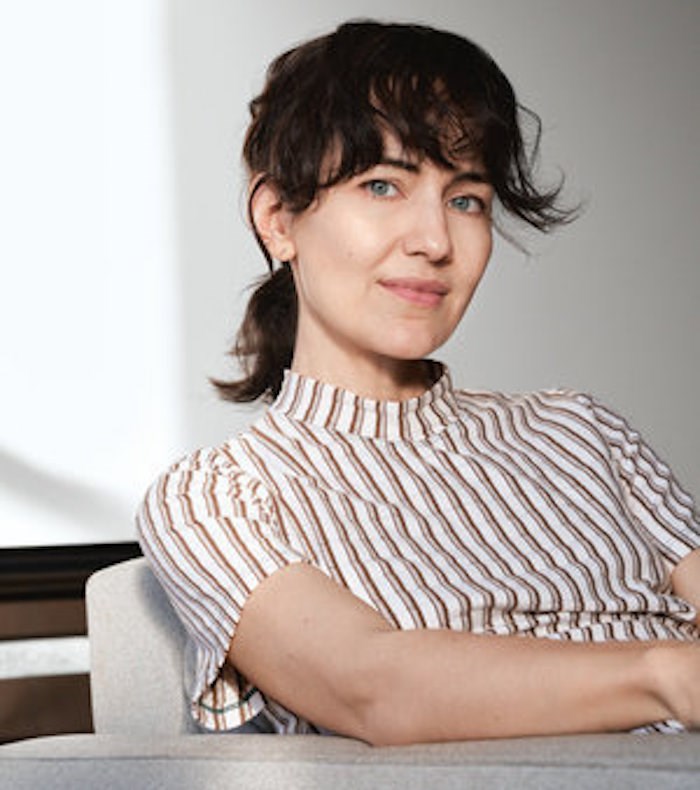 It's no wonder, perhaps, that at eight years old, Scorah's life ambitions were logged in a recently-unearthed family keepsake book as that of wanting to be an artist and a writer.

But in later years, that same memory book shows an evolving ambition for Scorah: she wanted to be a pioneer. Not a pioneer like Laura Ingalls Wilder in a covered wagon - a "pioneer" is Jehovah's Witness parlance for a full-time missionary and preacher.

Scorah was a third-generation Witness, and when the Armageddon came as promised, she and all her fellow believers would be saved, and restored to paradise to live forever.

Her real regular reading, outside of the curriculum at her Vancouver public schools, was the seemingly endless volumes of sanctioned literature published by the JWs - think the "Watchtower" magazines Vancouverites still can find on offer from current-day pioneers standing outside of SkyTrain stations, for example. Scorah's childhood was portioned into a steady diet of attending almost daily worship meetings, then going out door to door in the hopes of spreading the good word - not to mention getting a lot of doors slammed in her face.

There are a few other key Witness terms that have shaped Scorah's identity; these are words that carry hefty social and psychological burdens, like "disfellowshipped," "shunned," and "apostate."

As a teen, a budding romance with another congregant led to some "unrepentant sin," between Scorah and the young man - they had sex - and they confessed to their elders. This led to them being "kicked out of the congregation," as Scorah describes in her memoir Leaving the Witness: Exiting a Religion and Finding a Life.

But Scorah grovelled her way back into the fold eventually - even having to endure being made to slip in and out of the back of the room at her own father's funeral a short while after - and ultimately married, at age 22. Recommitted to the Witness way of life, Scorah and her husband moved abroad, serving as JW pioneers in several countries but ultimately landing in China, where she experienced the paradoxical freedom of being a missionary where proselytizing for Christianity was illegal.

And in being tasked with subversively teaching people to be Jehovah's Witnesses, Scorah realized she didn't actually believe in her own religion.

She cut ties with the Jehovah's Witnesses, and they shunned her. As Scorah began to find her own identity as a writer, moving to New York City to start her post-JW life, the religion bestowed a new label upon her: apostate.

It would take some time before Scorah could turn her experience into writing.

Scorah's journey to being an author came in waves. An essay Scorah submitted to Believer in 2013 about leaving the Jehovah's Witnesses was snapped up for publication within an hour of her hitting send. It was a dizzying prospect for someone just five years out of the religion who had let the floodgates open up on the painful break that resulted in a new reality for which "core-shaking" would be too light an adjective.

"It was exciting and shocking to me," Scorah tells me of this moment in 2013. "But it was also scary, because anyone who is a Jehovah's Witness and leaves is one thing, but to actually come out openly and write about it, you're considered an enemy of God. We've been taught in the religion since childhood that anyone who leaves, especially for not believing, for losing their faith, is an agent of Satan."

It's hard to believe that the woman seated next to me at a bustling downtown Vancouver cafe could be...Satantic. Scorah is relatively soft-spoken for a stereotypical New Yorker (though she admits when she comes back to Vancouver she feels maybe she's become that brasher "American"), but she talks fast, as though all her stories, all the learnings of her de-programmed life can't help but gush out like a fountain or geyser.

Similarly, when the book deal came, Scorah says the writing came pouring out of her. The result is a powerful and complex narrative that offers a rare glimpse inside the world of a hard-line religion. That processing time, between leaving her marriage, leaving China, and navigating the intense loneliness that followed, led Scorah to writing, tapping into something she sees as being within her all along - just never nurtured. After all, if the armageddon is coming, why bother nurturing a talent?

That time, too, was crucial in giving Scorah the distance she needed to see her experience clearly on the other side of it.

"When you wake up and realize that all that effort, the mental energy it takes to stay in a religion like that, was for nothing, you do feel angry," says Scorah. The anger evolves into perspective. For Scorah, that perspective evolved into her memoir, which was released this June.

Scorah's been doing press in the U.S. and Canada for Leaving the Witness, though our sit-down was coming after a welcome pause to spend time in Vancouver with what family she has left - meaning what family members non-Witnesses who are willing to welcome Scorah in their lives.

Coming home - if Vancouver is even home for Scorah, considering her backstory - is complicated. I've caught her just a few days ahead of her U.S. citizenship interview - a process I've actually been through myself and know the head-trip the process can be - and I wonder if she even thinks of herself as Canadian.

"I don't know what I am anymore," says Scorah, laughing, noting it's been about 17 years since she actually lived in Canada.

Nationality is just one of the identities by which any of us can align ourselves, and for Scorah, one of many she has been assigned. She was a Jehovah's Witness, that pesky person at your doorstep eager to tell you that the world was ending but it was actually good news. She was a foreigner abroad, sticking out in obvious and secret ways from nearly everyone else in China. She was the voice behind Dear Amber, a popular podcast from the mediums nascent days, and its popular and unlikely star. She is, to some, an apostate.

Most recently, however, before Leaving the Witness hit the shelves, she became "the mother whose baby died in daycare."

Scorah and partner Lee Towndrow lost their son, Karl, on the boy's first day at a New York daycare. He was 117 days old. The Medical Examiner could not provide a conclusive cause of death, and Scorah had to relearn her life yet again.

In her previous life as a Jehovah's Witness, she would have been comforted by knowing she and Karl would be resurrected post-Armageddon, just as she was indoctrinated to believe would happen after she lost her father in her teen years.

But that way of thinking is wholly unavailable now to Scorah, who explains that her break with the religion was so rigid that she didn't even miss being able to feel that way, that absurd hope.

"There is something about going through trauma that when you come out on the other side, you piece things together. You learn something. You see things in different ways," says Scorah. "I'd rather feel pain, and grief - which is unbearable at times - than delude myself."

'All I do is question now.'

What Scorah does feel now, or advocate for now, is questioning. She may be reluctant to see herself as a teacher - in part because she is making up for the 33 years as a Witness she considers "wasted" in her education by continually educating herself, from pop culture to the seven-year journey she's near completing to earn the college degree that was basically forbidden to her as a Witness - but in a way she is a teacher of questioning as she speaks out more about her past.

"How can we every really know anything?" posits Scorah. "All I do is question now."

Still, on this day, I'm the one asking questions - which Scorah admits can be hard for her at times, since she is blessed and cursed with the writer's intrinsic desire to be the one asking the questions.

There's a lot to ask about, and rarely a simple answer. Leaving the Witness covers a lot of territory, trauma, loss, and rebuilding. We talk about the kind of cultural moment cults are having right now, from Going Clear, to NXIVM and Keith Ranire, or Wild Wild Country, and, headier still, if Scorah thinks Jehovah's Witnesses is a cult.

"It's such a charged word," she says. "To me, when anything goes to the extreme, that's when it starts to cause problems."

Scorah notes that she isn't by any means anti-religion, but she does object to any group whose practices can result in harm. Take the well-documented stance of the JW against blood transfusions - that has cost countless people's lives. "If you are mandating that people die for your belief unnecessarily, I think that's a problem."

Never mind that Jehovah's Witnesses meets a respected psychologist's list of eight criteria for being a cult, one tenant of the organization is a deal-breaker for Scorah: When a religion mandates that when you exit the congregation, that you also have to leave behind your family and other loved ones who remain in it.

"When the price of leaving is anyone shunning you, that seems wrong to me."

This brings us back to Vancouver, because for the past decade, Scorah has made trips here as someone not welcome in her old community, and, more pointedly, in her own family.

Scorah says the challenges of visiting Vancouver have lessened progressively as time has passed. "I've sort of reclaimed it my own," Scorah explains, adding that Vancouver and its natural beauty and general mildness is like the opposite of New York.

Plus, Scorah has come into a stronger sense of self now. She has negotiated her two-fold fame and identity shift as mourning mother and parental leave advocate; she continues to be a mother (Scorah and Towndrow are also the parents of a preschool-age daughter, born a year after Karl's death); and now she is actually quite comfortable in what she says feels like the abstract of being a published author touting a high-profile book.

Scorah says she's found freedom, but also that she doesn't feel fundamentally all that different than who she has, at heart, always been.

"I've changed a lot, but I don't feel I've changed that much. Deep inside, I feel, we are who we are."

She may not ever fit in, whether the context is America, Canada, Vancouver, motherhood, and most assuredly her old religion, but as a natural observer - perhaps as a natural writer, I suggest - Scorah enjoys that "slight off-kilter feeling" that comes from being an outsider.

"I don't care anymore what people from my past think," she affirms.

Leaving the Witness: Exiting a Religion and Finding a Life (Viking/Penguin Random House) is available at booksellers everywhere.