Property taxes are killing what is the hugely successful arts-centred enterprise of Vancouver's Beaumont Studios.
0
Jul 8, 2019 6:14 PM By: John Kurucz

January 2020 should be a pretty sweet time in Jude Kusnierz’s life.

She should be celebrating 15 years in business at Mount Pleasant’s Beaumont Studios. Kusnierz should be expanding what is one of the largest arts businesses in Vancouver, and one of the few big ones left in Mount Pleasant, or anywhere on the city’s West Side.

Should is the operative word here. 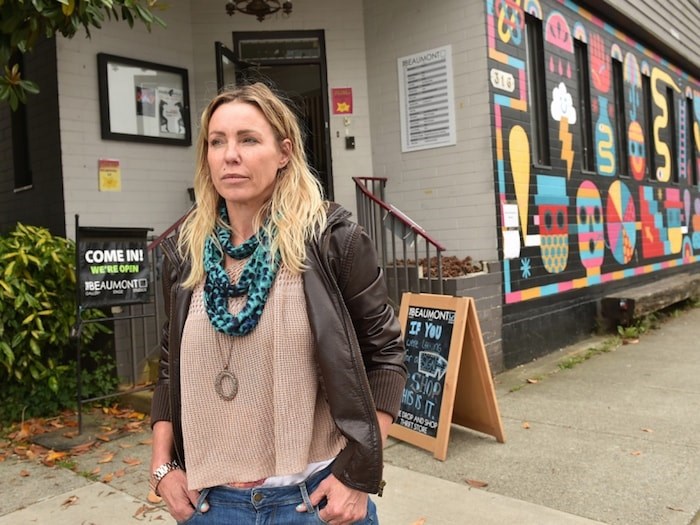 Beaumont Studios’ executive director Jude Kusnierz says that without some help from the province or the city, her studio will close by January 2020. Photo by Dan Toulgoet/Vancouver Courier

Instead, Kusnierz is left wondering if the business will even make it into the new year.

Property taxes are killing what is a hugely successful enterprise. Of the dozens of arts spaces spread over two buildings on West Fifth Avenue, the vacancy rate hovers at less than five per cent. Close to 100 artists of all stripes work out of there, of which about 80 per cent are full-time artists.

The large performance space that accommodates about 200 people is booked solid almost every weekend.

But when your overhead reaches well into six figures, the financials stop making sense. Kusnierz’s business operates under a triple-net lease, which means paying for property tax, the lease and maintenance. Those monthly costs are in the range $34,000, of which 90 per cent is accounted for in property tax. The Beaumont property was assessed at $15 million as of July 2018 — $14.9 million for the land, $74,700 for the buildings.

“That’s what we’re dealing with here,” said Kusnierz, who serves as executive director at Beaumont. “[The city] doesn’t want us to be taking up this space, they want us to be a four-storey high rise. We’re not using our density to our fullest capacity, according to the city.”

Kusnierz launched a final letter-writing campaign to the city on July 8, two days before council receives updates on the city’s budget and small business assessment and taxation.

More than 1,000 letters of support had been received in less than 24 hours.

Kusnierz wants one of two things from the city for her business and others in the arts and culture sectors: a full exemption on property taxes or some form of tax abatement.

Those types of exemptions are almost exclusively given only to non-profits, institutions, hospitals or religious organizations.

So why should an arts hub get one?

“If you want there to be just a bunch of four-storey, highrise gaming companies in this neighbourhood, then let us go,” Kusnierz explained. “This is one of the last brick and mortar spaces that allows artists to produce shows and actually build their craft and their businesses. These are people making a living, paying taxes, doing their art and sustaining as a full-time business in the arts.”

Kusnierz has received two grants from the city over the last five years, totalling $150,000. Finding $150,000 in other matching funds was needed before those grants were allotted, and acquiring that necessary capital happened earlier this year.

The intervening years between 2014 and 2019 have seen some cost increases passed down to tenants, who, Kusnierz says, have been largely understanding. A 110-square-foot studio that cost $500 in 2014 now goes for around $800.

Those cost pressures have pushed Kusnierz to a breaking point where she can’t continue offloading costs to her tenants. Without some form of government intervention, Beaumont will close in January.

“Every studio in these two buildings, we subsidize by a couple thousand dollars a month because of what’s happened in the last couple years,” Kusnierz said. “But we need to make another $37,000 a month for operational costs.”

Kusnierz said she’s been in talks with virtually every council member, and while some lifelines have been suggested, few have been implemented.

Kusnierz said the two per cent tax shift from commercial to residential represents a savings of about $1,000 a year.

Coun. Michael Wiebe spoke to the Courier in mid-June, after Kusnierz reached out to him for help. Wiebe operates eight ½ restaurant in Mount Pleasant and is a member of the Vancouver Art House Society, which helped galvanize last year’s Save the Rio campaign.

Among the ideas Wiebe offered was the prospect of split assessment, which would help weed out huge speculative pressures. The model works by valuing and taxing properties based on their actual use, rather than BC Assessment’s preference for highest and best use.

Wiebe and others at the city and province are looking at creating a new property class that would include a 10-year tax abatement. Organizations that provide arts and culture services would have to prove their commitment to arts and culture over at least a decade in order to qualify for those tax breaks.

“This is something we looked at with the Rio Theatre and others. The goal is that that will be the Rio Theatre for 10 years and Beaumont can be Beaumont for 10 years,” Wiebe explained. If someone wanted to develop, they would have to pay the benefit they got for every year prior plus a penalty. It would be very expensive for a developer to develop.”

A lot of those changes, however, take time.

Kusnierz doesn’t have much of that left.

“We can’t take any more money out of our tenants,” she said. “We can only rent this place out so much, there are only so many Thursday and Friday evenings when people are using the space. And we can’t keep asking the landlord to keep giving discounts. The glory days are over.”