Playing a hometown gig in Stanley Park in front of thousands may not even be the high water mark for Belle Game’s September calendar. Come Sept. 15, they embark on a month-long tour with former Smiths guitarist Johnny Marr that takes them across Canada, the U.S. and Mexico.
0
Sep 4, 2018 4:36 PM By: John Kurucz

September can be a bit of a bummer for Vancouverites.

Summer is waning, school is back, the rains return and the two-month reprieve from gridlock is gone. 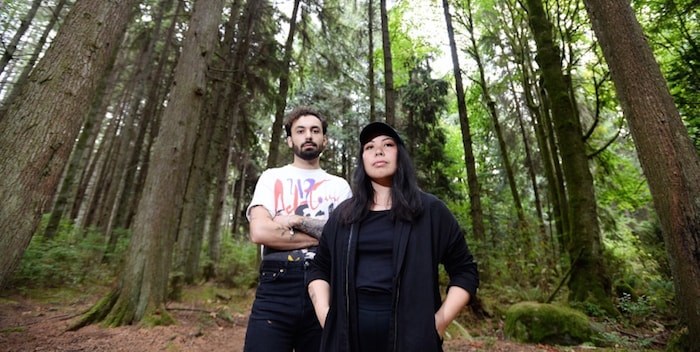 Vancouver pop trio Belle Game is having none of those bad vibes. They’ve got the sweetest of Septembers lined up, starting this weekend with what could likely be the biggest gig in their nine-year run.

Skookum Festival’s first foray into Vancouver begins Friday and features a healthy mix of top tier names — Metric, The Killers, and Florence + the Machine — along with a slew of Vancouver acts and Cancon mainstays.

Outside of Belle Game’s Sunday afternoon set, Stanley Park will also host Vancouverites Hey Ocean!, Yukon Blonde, Delhi 2 Dublin and Said the Whale. If those bands represent the here and now, then Buffy Sainte-Marie, Blue Rodeo and Barney Bentall are flag bearers of Canadian music from decades past.

Playing a hometown gig in Stanley Park in front of thousands may not even be the high water mark for Belle Game’s September calendar. Come Sept. 15, they embark on a month-long tour with former Smiths guitarist Johnny Marr that takes them across Canada, the U.S. and Mexico. The trio will play iconic venues such as the Fillmore in San Francisco, Irving Plaza in New York City and the Cannery Ballroom in Nashville.

The Courier caught up with Belle Game guitarist Adam Nanji, who works for the Courier’s sister publication Vancouver Is Awesome, and vocalist Andrea Lo to talk about a path that’s seen them grow up in Vancouver to living in a van for extended periods.

You’ve had essentially the same lineup since 2009. This is no small feat. How do you manage to not kill one another?

A.L: We’ve had quite a few lineup changes since 2009, but changes in a lineup don’t necessarily mean that the existing relationships are without their flaws and/or challenges. Humility, accountability, personal awareness, and the willingness to speak up, listen, and explore are all very important values.

The tour with Johnny Marr — how did this materialize and what’s his/the Smiths’ influence on your music, if at all?

A.N: We think we can trace the tour offer to a recent show we played in Portland opening for Broken Social Scene. We met an incredibly nice young gentleman backstage, chatted about touring, gear, all the usual things. Turns out he's not only a talented musician in his own right, he’s Johnny Marr’s son. I think Mr. Marr’s music has had an incredible influence on many bands, even if they don’t know it. They were as gentle as they were punk and in that sense, helped shape the “indie rock” that came out around the world years later.

Speaking of not killing each other, the Marr tour is a month long. That’s a lot of time in the van. What’s the longest tour you have done, and how did you live to see the end of it?

A.L: I think the longest time we’ve been out was eight weeks with Broken Social Scene. It was a tour that was very close to our hearts, and we were amongst friends, so our time away felt far less isolated, and we all bonded over shared purpose within our music and performances. Keeping a driving purpose for why you are doing the work you are doing, and taking ownership of that for yourself is hugely important to seeing yourself through a tour.

A.N: Jazz in the van. Waking up on tour is hard, but if you cue up Chet Baker Live in Paris in either the hotel room or the van, it makes even the bleakest surroundings feel romantic and meaningful. Other than that, we keep things healthy, we exercise, we find good restaurants. It’s all about the show, and to me, the “rock and roll lifestyle” doesn't contribute much to a great night on stage.

How do you view your spot at Skookum? Not to downplay it, but your band has played some sweet gigs in the past and will continue to do so right after the festival.

A.L: It’s is an opportunity to connect with people on a very special and unique basis even if we don’t get a chance to shake hands with everyone we meet. I’ll always feel greatly humbled seeing the power of an audience and each individual in it.

Skookum details are online at skookumfestival.com.