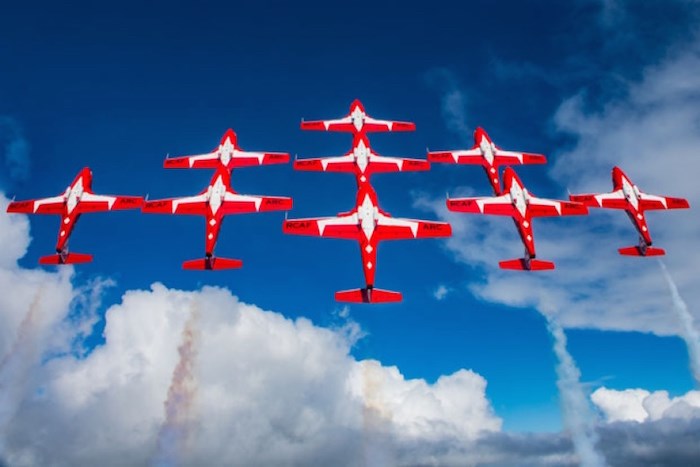 The Snowbirds are coming to perform Saturday. Photo courtesy City of Delta/Alpha Aviation

Serving as ambassadors of the CAF, the CF Snowbirds demonstrate the high level of skill, professionalism, teamwork, discipline and dedication inherent in the men and women of the CAF and they inspire the pursuit of excellence wherever they go in North America.

The Snowbirds fly the Canadair CT-114 Tutor, a Canadian-built jet that was used by the Canadian Forces as a basic pilot-training aircraft form 1963 until 2000. The Tutor weighs approximately 7,170 lbs (3,260 kg) and is powered by a J-85 engine producing 2,700 pounds of thrust.

The 431 Air Demonstration Squadron consists of approximately 80 Canadian Forces personnel, 24 of whom comprise the show team that travels during the show season. The Snowbirds' demanding schedule is met through the dedicated teamwork of not only the 11 military pilots and technicians, but also the entire home team.

This year’s team also has a local connection.

Capt. Arpit Mahajan, flying as Snowbird 10 in the advance and safety pilot position, grew up in Delta and began his path in aviation when he earned his private pilot license in 2011.

He joined the CAF the following year under the Regular Officer Training Plan and graduated from the Royal Military College of Canada in 2016 with a Bachelor's degree in Business Administration.

After earning his wings on the CT-156 Harvard II in 2016, he was offered an exciting opportunity to join the CF Snowbirds upon completion of his training at 2 Canadian Forces Flying Training School in Moose Jaw, Sask. Posted to 431 Air Demonstration Squadron in 2017, he spent a year gaining valuable flying experience on the CT-114 Tutor and, has since accumulated over 500 hours of military flying experience.

Admission to the grounds is absolutely free, however this year there are significant changes to parking access for the site. On-site parking is strictly pre-paid, so those wishing to attend who did not plan ahead should take careful note of the parking information provided by the Boundary Bay Airshow site and the locations of the satellite lots and shuttle times.