A local artist has a call out for the latest instalment in her project, which she’s dubbed the “Cherry Lane Cats and Canines” fence. She’s running the project through her non-profit society.
0
Sep 27, 2018 11:47 AM By: Julie Maclellan

Margaret Halsey has always believed dogs are critical to the well-being of people.

She believes it so strongly, in fact, that she’s set up a registered not-for-profit society to promote the importance of dogs in our lives: the Citizen Canine Companion Society.

Halsey is a New Westminster artist, best known to most local residents as the creator of the “dog fence” projects in Sapperton. Her work – consisting of large-scale portraits of local residents’ canine companions – adorns fences in the alleyway between East Sixth Avenue and Devoy Street and the Cherry Street laneway. 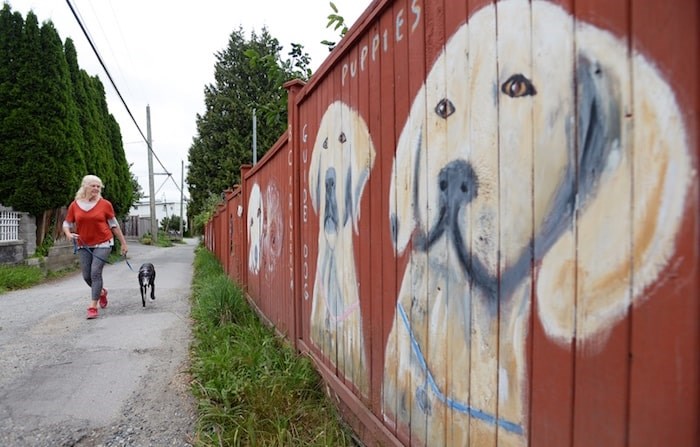 Margaret Halsey and her whippet, Smyth, on a walk past some of her dog portraits. Halsey is currently looking for more pet owners who’d like to take part in the next edition of her fence project. Photograph By RECORD FILES

Halsey has a call out for the latest instalment in the project, which she’s dubbed the “Cherry Lane Cats and Canines” fence. She’s running the project through her non-profit society.

Pet owners can commission a portrait of their favourite dog or cat for a minimum $100 donation. Eighty per cent of the money goes to B.C. and Alberta Guide Dogs, an organization that trains guide dogs for those who are visually impaired and support dogs for people with autism.

Of the 14 spaces on the fence, Halsey has six more up for grabs (although three of those are under consideration, so act fast to ensure your spot). Halsey is hoping to hear from more dog and cat owners – she only has one feline subject so far and would love at least one other cat – so that she can fill up this fence and move on to the next.

“At this point I need a new fence,” she says, noting she finds her artistic “canvases” by simply walking around the neighbourhood and approaching homeowners about fence spaces she finds appealing.

That’s often how pet owners find her, too, she says, noting sometimes she just finds her subjects by meeting a pet owner and their companion out for a walk while she’s outside painting. She works from photos of her subject animals – either photos she takes herself upon meeting the animal, or photos submitted by the pet owner.

From there, she adds the image of the pet in question to her fence so it can be seen by people in the neighbourhood.

As a dog owner herself – her faithful pet is a whippet named Smyth – she knows just how much people’s pets matter to them, and she uses her portraits to celebrate the importance of our animal companions.

Halsey notes her work has been well received.

“It’s so lovely,” she says. “Every time someone sees them, they always tell me how important their dog is.”