It is stories like Lambert's that not only make us painfully aware of the hardships that the native community faced but also remind us that although we cannot change what has been done in the past, we can work towards a better future and change what we do today.
Oct 31, 2018 11:49 AM By: Rachel Way

Lambert: From a family scarred by residential schools to a place of hope for his Coast Salish community 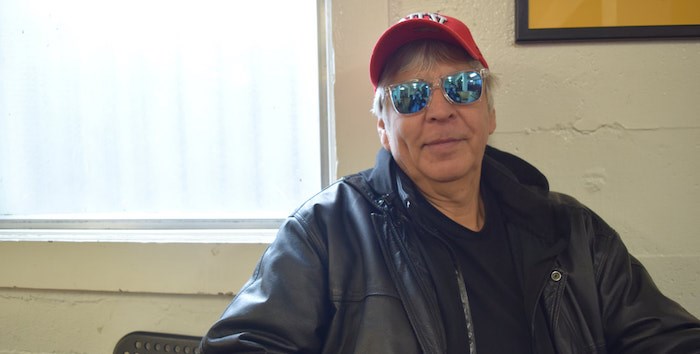 I spoke to Lambert for a very long time. He was open, interesting and authentic. He shared with me many stories that opened my eyes and enlightened me about a group of people, The Coast Salish, of whom I knew very little about before.

Lambert shared with me stories of hardship, trauma, and struggle, but also amazing stories of overcoming these struggles and working towards a better future. It is stories like Lambert's that inspire me and remind me of the power of staying true to yourself and fighting for what you believe in.

Lambert was born and raised in Powell River. He grew up in the Coast Salish community and was one of 17 children, 11 boys and 6 girls. However, he did not meet his siblings until he was 13 years old. He explained to me that they went to boarding school so he never had a chance to meet him until he was a teenager.

Lambert's siblings attended residential schools and spoke of the horrors they had faced. For example, they had to run 200 laps of the field as punishment for attempting to escape. They were not allowed to speak their native language, contact home, and, in an act of a gruesome punishment, [the school staff] would go as far as lining them up and walking on their stomachs. Many of his siblings returned home damaged, unable to speak their language and incredibly scarred. One brother was so damaged he could hardly speak. His siblings, Lambert explained, didn't let this stop them. Lambert told me how his siblings would always say "what doesn't kill you makes you stronger," and that they thought [the school's staff] would break them but they were wrong.

Lambert did not face the same atrocities that his siblings did. When his parents realized what was being done at these "boarding schools" they attempted to hide him and keep him away from the terrible fate his siblings had faced. Lambert was sent to live with and be raised by his grandma. She looked after him, hid him, and taught him his native language. These years he told me were some of the best of his life. Lambert was moved around a lot in an effort to avoid residential schools. He was sent to a boarding school in the United States. Although it was not a residential school, life was still far from easy. Being the only aboriginal child in the school, Lambert was often made fun of and picked on quite a bit. He was alienated for being native and, although he was not forced into a school like his siblings, he still experienced harsh racism.

Lambert's stories highlighted the atrocities that the aboriginal people faced; his stories brought to light what had been done to them and how it later affected them as a group. I found myself holding back tears speaking to Lambert and could only imagine what he had been through. Although I was incredibly saddened by the stories Lambert shared with me, my spirits were lifted by the stories he then went on to tell me about the native community today and what they are doing to restore and preserve their culture.

The Coast Salish community are now trying to open a long house as a way to restore their culture. They have a newspaper to teach people what they were slowly forgetting. The newspaper includes colours, words, and numbers in their native language to remind them and keep their culture alive. It also features stories of Aboriginal issues in the government keeps them informed on what is going on in their community. Lambert tells me that the young people -- although they have their struggles with drugs due to abuse and neglect -- still do a good job of trying to keep the culture alive and he is proud and hopeful for the future of the Coast Salish community.

It is stories like Lambert's that not only make us painfully aware of the hardships that the native community faced but also remind us that although we cannot change what has been done in the past, we can work towards a better future and change what we do today. Our words and our actions do matter and do have an impact -- every act and every word, no matter how small, do make a difference, more than we may even realize.

I hope that we can all be inspired by the stories that Lambert shared with us to fight for what we believe in and always stay true to ourselves. I am so grateful that Lambert was open and willing to share, as I think it is important for all of us to understand what our native people have been through and to see the power behind staying true to yourself and fighting for what you believe in.

Watch a dragon boat championship race this weekend in the waters of False Creek
Sep 24, 2021 3:00 PM