Someone took the time to create an East Van Cross, also known as the ‘Monument for East Vancouver,’ out of maple leaves in a popular park.
0
Oct 31, 2018 7:36 AM By: Elisia Seeber 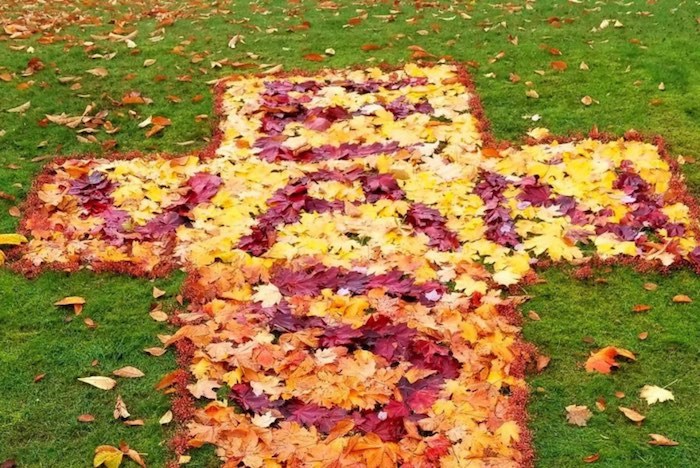 Someone took the time to create an East Van Cross, also known as the ‘Monument for East Vancouver,’ out of maple leaves in a popular park.

The public artwork was spotted in Burrard View Park on Monday morning and it's beginning to make the rounds on social media, with pictures surfacing on Reddit and Instagram.

The artist behind the colourful maple leaf piece is unknown, but it’s pretty impressive. According to a Reddit user the artwork was still visible on Tuesday morning.

The City of Vancouver commissioned the ‘Monument for East Vancouver’ as part of the Olympic and Paralympic Public Art Program in 2009 but the symbol’s roots are far older than that.

The monument, created by Artist Ken Lum – who was born and raised on the East Side – stands 17 and a half metres tall on the corner of Clark Drive and East Sixth Avenue and represents “a physical marker that calls attention to the historical and ongoing division of the city along class lines.”

“The monumentalization of the East Van cross results in a provocative reminder of the social, economic and political divides that exist in Vancouver,” Paloma Campbell wrote in a City Public Art brochure on the project.

“It prompts us to think about the lives of those who call East Vancouver home.”

Campbell writes that the origins of the symbol, although still quite the mystery, are possibly linked to the once large Roman Catholic population living in East Vancouver.

The symbol has popped up in a number of ways over the years – “school children carved it onto desktops, graffiti artists sprayed versions of it on the sides of buildings, and gang members flaunted it on their jackets,” she wrote.

And now it has been made with maple leaves.

Before it blows away, why not take a moment to think about Vancouver's divide and the people who may be doing it tough on the East Side.