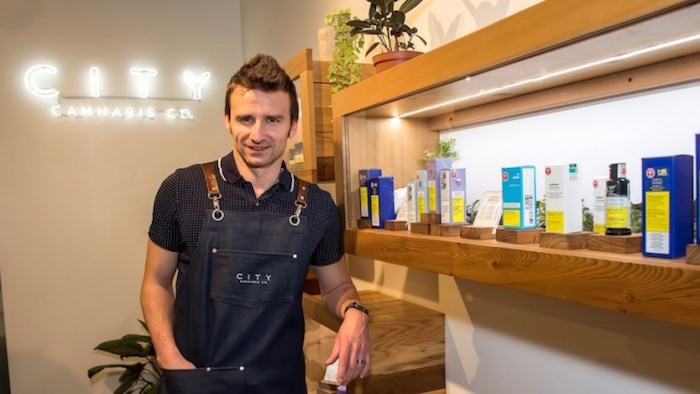 City Cannabis Co. CEO Krystian Wetulani built his company before selling it to Wildflower Brands for $45 million. Photo by Chung Chow/Business In Vancouver

During the summer, about nine months after Canada legalized recreational cannabis sales, the rollout of legal retail stores was still slowly blossoming in Vancouver — only seven stores were fully licensed and open.

By October 2, only 14 stores in Vancouver had provincial licences.

A provincial licence is one of the three main requirements operators need to run a legal cannabis retail store. The others are a municipal development permit and a municipal business licence.

But as the cannabis market gradually shifts toward legal retailers, executives at three companies representing six of the seven legal stores operating in Vancouver during the summer say their businesses still face onerous regulatory challenges. One main challenge is the province’s rule that limits cannabis retailers to eight locations, as a way to encourage small businesses.

“We have locations that we wanted to buy development permits for in Vancouver that we had to hold off on because we were waiting to find out whether we were going to win a request in Kelowna,” he said. “The same thing happened in New Westminster.”

City Cannabis Co. CEO Krystian Wetulani similarly feels restricted by B.C.’s eight-store limit. He pointed to provinces such as Ontario, where there is a 75-store limit, and Alberta, where there is no limit on the number of cannabis stores but no operator is able to have more than 15% of the stores in the province at any one time.

“To have an eight-store limit is definitely challenging,” said Wetulani. “It makes you focus more on the premium locations, making sure you’re really maximizing your eight stores.”

He adds that because competing stores are selling many of the same products, his job is to provide customers at his stores – at 2317 Cambie Street, 7289 Fraser Street and 610 Robson Street in Vancouver – with a satisfying experience.

Muse Cannabis Store, which opened a location at 3039 Granville Street in July, is another retailer that would like to be able to have more than eight stores.

President Geoff Dear said he appreciates the government’s rationale to help small businesses but that he “would love to evolve past the eight-store limit.”

B.C. Minister of Public Safety and Solicitor General Mike Farnworth told Business in Vancouver that the province’s eight-store limit is staying in place for the foreseeable future, with no plans to review it until 2021. Farnworth said the rule is aimed at encouraging local ownership and preventing the market from being dominated by large players.

Cannabis activist Dana Larsen, a director with the Vancouver Dispensary Society that runs a dispensary at 1182 Thurlow Street, said the legalization rollout has been too slow and challenging for longtime operators.

“I’d be happy to shut down my dispensaries when they’re not needed anymore, when there’s a legal system that can provide our clients with the same quality and affordability and range of products,” he said. “We’re a long way from that happening.”

Larsen is one of dozens of entrepreneurs in the process of getting licensed by the provincial government, and his Thurlow store has a development permit.

“We’re not really in a hurry to get that [approval] because ultimately switching into the legal system is going to be a disaster for us,” he said.

“Like a lot of other dispensary operators, we’re in that system and we’re funnelling through it together to get our final permit and become legal. But really, I’d rather things stay the way they are now, because I can provide better-quality cannabis, a better range of products and a better price to my customers than I could if I became legal.”