The exhibit, called "Lapata. And the Left Behind," includes black-and-white photos of mothers and grandmothers holding treasured pictures of their sons and other family members.
0
May 3, 2019 2:58 PM By: The Canadian Press

VANCOUVER — Jasleen Sidhu hones in on one area when she talks about her love of history and what intrigues her most — historical wrongs including Canada's residential school system, the Holocaust and the violence against Sikhs in India's northwestern province of Punjab.

It's the last category that has directly impacted Sidhu's community the most but elicits little discussion because sparse information has been available about the deaths and disappearances of thousands of young Sikhs in the 1980s and '90s, allegedly at the hands of police and the Indian Army. 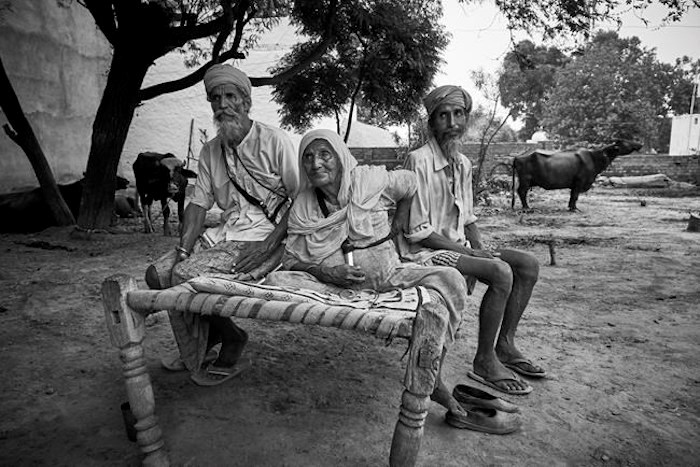 Sawaran Kaur (centre) is shown with family members in Punjab in a handout photo, part of a new exhibit premiering in Vancouver. Her son Mohinder Singh disappeared at age of 22. The international premiere of a photo exhibit featuring Sikh families in Punjab. They were left to mourn the disappearance/death of their loved ones — sons, husbands, brothers — who were among thousands of young men abducted from Punjab during the 1980s and ’90s as the minority Sikhs tried to create a separate homeland called Khalistan. THE CANADIAN PRESS/HO

"My family is from Punjab and most of my family was living in Punjab at that time," the future teacher says.

Sidhu, 23, is hoping a four-day international exhibit premiering at The Space art gallery Saturday in Vancouver and featuring photos of families left behind will shed some light on their plight as many continue to live in poverty after losing their main breadwinners, the "lapata," which means the disappeared or missing in Punjabi.

The exhibit, called "Lapata. And the Left Behind," includes black-and-white photos of mothers and grandmothers holding treasured pictures of their sons and other family members. It's scheduled to open later this year in Toronto and Ottawa.

Sidhu, who attends Simon Fraser University, where she is a member of the Sikh Students' Association, said the topic of the anti-Sikh violence that groups such as Amnesty International and Human Rights Watch have pursued as a human-rights atrocity has mostly been left undiscussed between her and her 20-year-old brother Manbeer, who is also a member of the association at SFU.

"I do try to go to events where I learn about historical wrongs," Sidhu says, adding tragedies that leave families suffering after the unlawful deaths of loves ones can sometimes be put into perspective, perhaps in a limited way, only years later, even if justice and answers remain elusive.

"I think we're at that point with the '80s in Punjab, that we can start learning about it. It's far enough away that the trauma is trying to heal itself but we're still close enough to the facts that we can learn more about it."

Much of the violence against Sikhs began in June 1984 when the Indian Army stormed the Golden Temple, Sikhism's holiest shrine in Amritsar, to root out extremists working toward an independent homeland they called Khalistan, to be carved out of Punjab.

In October that year, following the assassination of prime minister Indira Gandhi by her Sikh bodyguards, riots against the minority group in Delhi and elsewhere led to the attacks against Sikhs in a rampage that spiralled into revenge half a world away in a British Columbia-based bombing plot that brought down two Indian-government-owned Air India planes in June 1985, killing 331 people, mostly Canadians.

Jatinder Singh, director of the humanitarian group Khalsa Aid Canada, which sponsored the exhibit in Vancouver, said its affiliate in India provides a monthly stipend to Sikh families who were left destitute, many of whom spent years trying to find their missing kin.

"Unfortunately, we will never know what happened in many cases. They were informally told by police that 'Your child was cremated.'"

Singh said he was about 11 and growing up in the United Kingdom when he would see his father reading stories of missing and murdered Sikhs in a weekly Punjabi newspaper featuring photos of the violence that had less of an impact on him than the sadness he saw in his parents' eyes.

"I was seeing the reaction of my parents more, watching my dad, once a week, with the paper and being distraught and knowing that this person from this village got killed or these are villages that are near our village in India and another young man got picked up and killed or has disappeared," Singh said.

"Even though it happened a long time ago the repercussions of it are still there. It's intergenerational. The younger generation has seen it as well, with an uncle or auntie being tortured or having to run for their lives."

Abhishekh Madhukar, a freelance photojournalist who photographed the families in their villages in Punjab, said he was inspired by their warmth and lack of anger and resentment.

"They had grace and dignity in times of suffering, which showed a certain strength and courage," he said on the phone from Delhi.

"I hope that as humans and citizens of the world we can see that these man-made disasters certainly can be avoided."