Immigration is fuelling the popularity of French-immersion programs in some provinces and territories as parents across the country increasingly consider bilingualism an important national value tied to lifelong cultural opportunities for their children.
0
Sep 11, 2018 7:19 AM By: The Canadian Press

VANCOUVER - Back-to-school buzz only led to worry for a Vancouver father fretting about his daughter's chances of getting into French immersion — a year before she starts kindergarten.

Prokopi Klimos said hearing about parents having to put their kids' names on long wait lists at multiple schools has him concerned about whether his family will have to move if Helen, who is 3 1/2, gets a spot far from their home.

"It's so competitive and that's why this September has spurred me to start thinking about it," he said, adding an English-only school is two blocks from their home, but he's determined to get his daughter into French immersion.

"We're worried. We're planners. We like to be organized and we like to have a plan," Klimos said of himself and his wife Ellisa as they consider how they'll manage school drop-off and pick-up schedules if their daughter is accepted at a far-off school and their younger son's daycare is in the opposite direction.

Rahel Staeheli, who lives in Surrey, B.C., had her daughter on three wait lists last spring but Milani didn't get into any of the schools when she started kindergarten this year.

"I spoke at the school board meeting. I emailed the education minister. I emailed the chairperson of the Surrey School Board," Staeheli said of her efforts.

"I was shocked initially and now that I understand how insane the wait lists are I'm not shocked anymore, but I'm disheartened for sure. We're just hoping that maybe by Grade 1 she'll get in."

Staeheli said Milani may even have to wait until Grade 6 to get into what is known as late French immersion, but that would mean leaving her peers to attend a different school "at a pretty tricky age, socially."

Nicole Thibault, national executive director of Canadian Parents for French, said demand for French immersion is at an all-time high but a lack of teachers in most jurisdictions has parents vying for limited spots.

Immigration is fuelling the popularity of French-immersion programs in some provinces and territories as parents across the country increasingly consider bilingualism an important national value tied to lifelong cultural opportunities for their children, Thibault said.

School boards and employers in Alberta have offered French immersion programs in areas such as Fort McMurray in order to retain immigrant employees, she said from Ottawa.

"You start to realize how the changing demographic is solidifying that Canadian value, that being bilingual is important."

While demand for French immersion programs has traditionally been highest in Eastern Canada, their popularity is gaining in the West, and Yukon and the Northwest Territories are now also pushing to recruit teachers, Thibault said. She said Quebec, usually a target of recruiters, is dealing with its own shortage of French educators.

Some Canadian school districts use lottery systems to accept students, while others cap the number of students they'll take or provide time-limited online registration, as is the case in Ontario, she said.

"You can imagine within 10 minutes classes are full and you may have gotten one kid in and not their sibling. So there's those what we call 'crazy' systems."

Federal funding of $31 million announced earlier this year for provinces and territories to recruit French immersion teachers is allowing jurisdictions to co-operate instead of compete with each other, Thibault said.

She said she participated in a meeting of Canadian education ministers in June when they expressed concerns and discussed strategies.

"One was looking at increasing the pool of teachers, not just stealing from each other," she said.

Other ways to recruit teachers included high schools identifying students who could train as teachers, removing barriers for those wanting to move between jurisdictions to teach French, and using technology to deliver programs differently, Thibault said.

"To me, those are good signs that everybody's aware of the challenges they're facing. Everybody's having a similar scenario, even though it's more acute in some provinces than others."

British Columbia's recruitment challenges have been exacerbated by a Supreme Court of Canada decision in November 2016, when smaller class sizes were restored, requiring more teachers in all subjects. 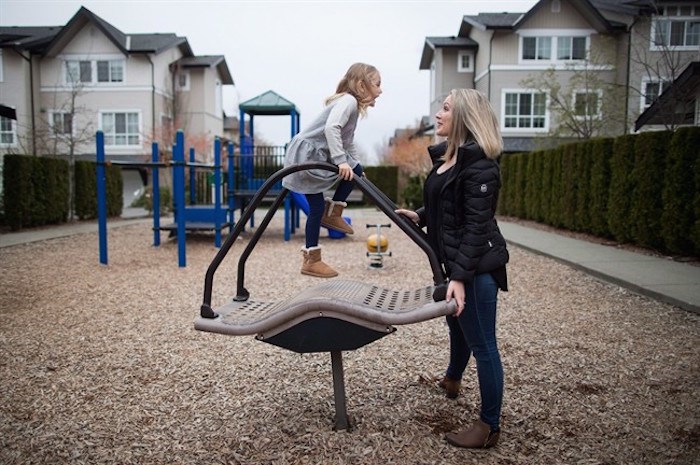 Rahel Staeheli plays with her daughter Milani Staeheli-Hildebrand, 5, at a playground near their home in Surrey, B.C., on April 11, 2018. Rahel Staeheli had her daughter on three wait lists for a spot in French immersion but Milani didn’t get into any of them when she started school last week. Staeheli is among parents across the country who say a lack of French-immersion teachers is depriving their kids of a bilingual education. THE CANADIAN PRESS/Darryl Dyck

The Education Ministry said so far in 2018, it has certified 15 people from France to work in B.C., and 12 of the certifications came after Fleming's trip.

Another eight applications received from France this year are being processed for those who completed a teacher education program there, Fleming said.

The applicants would require further training in B.C. before being qualified to teach, unless they can demonstrate proficiency in the provincial curriculum, the minister said.

"The Ministry of Education doesn't usually fund seats that are in post-secondary institutions but we'll be looking to do more of that," Fleming said of the province's initiatives.

His ministry will be sending a delegation to Ottawa this fall to determine details of the federal funding, Fleming said.

"It's an evolving sign of the Canadian identity," he said of the popularity of a bilingual education.