What’s so funny about a pandemic? Vancouver comedians weigh in 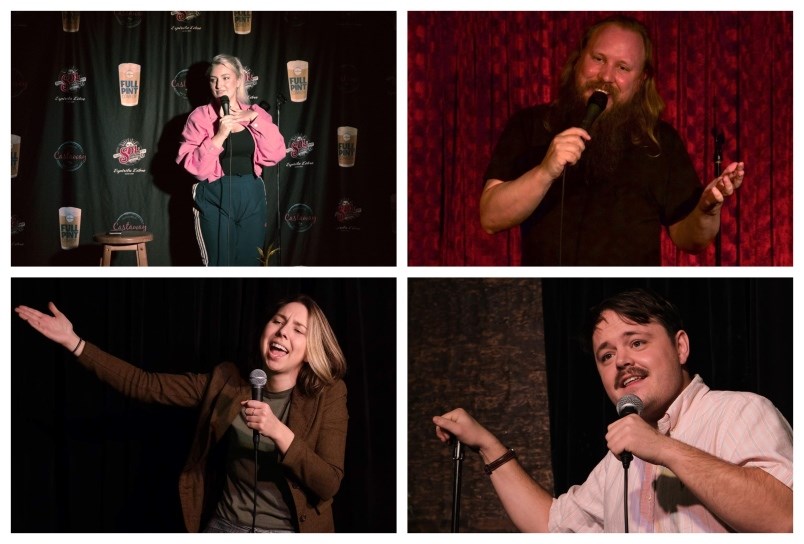 Full disclosure: The author of this article is involved in the comedy scene, employed by one of the venues and is friends with some of the people interviewed for this story.

It’s been said that “tragedy plus time equals comedy.” But what if tragedy is unfolding in real time? Can we afford to laugh? Do we need laughter more than ever? The Courier checked in with four local comedians to chat about comedy in times of crisis, joking about sensitive topics and how to make money in a gig-less economy.

‘The saltiness is so good’

Sophie Buddle recently returned from Halifax, where she writes for the CBC sketch and news satire show This Hour Has 22 Minutes.

“We’ve been covering the corona story and I wasn’t worried about it for the first couple of months, but it’s just taken this turn. It feels so sudden,” she said, from her home in Vancouver. “We just wrapped two weeks ago, so I’m in kind of a good position, because most of my income for the year comes from writing for the show,” she said.

Usually when Buddle is in Vancouver, she tries to perform as much stand-up as possible, but due to current social-distancing restrictions, every comedy show in Vancouver has been shut down. “My Facebook notifications are just about everything getting cancelled,” she said. “Things I didn’t even know I was invited to got cancelled.”

Even with the serious nature of the pandemic, Buddle is still finding humour in these dark times.

“All these companies are going bankrupt and millennials are tweeting at them, being like, ‘Well, if this company didn’t want to go bankrupt, it shouldn’t have been eating avocado toast every day,’” she said. “The saltiness is so good.”

Buddle is never one to back away from sensitive topics in her own stand-up.

“My comedy is very dirty and pretty political, so that’s kind of my bread and butter,” she said. “I find it great to talk about sensitive topics because comedy is all about building that tension up and then letting it go — it’s a very easy way to create tension in a room.”

For now, Buddle is holed-up with her boyfriend, recording episodes of her podcast, Obsessed, “We did a bonus episode of him and I, early on in the quarantine,” she said. “We’ll do another one in a few weeks and see if we still love each other so much.”

Graham Clark is a three-time Canadian Comedy Award winner, he hosts the weekly stand-up showcase The Laugh Gallery and regularly appears on CBC’s The Debaters. Despite the current climate of collective anxiety, Clark is trying to stay calm.

“If I’ve learned anything from any kind of disaster movie, it’s that panicking does not help,” he said. “It’s always the panicky idiot that gets eaten by the zombie.”

Like many gig-economy workers, he has plenty of reasons to panic, including no holiday or sick pay, no employment insurance and a sudden drop in income. “In one way or another, all my income is tied to comedy,” he said. “Yeah, it’s affecting me, but I would guess it’s affecting other people even more.”

Fortunately for Clark, he already has one foot in the digital realm, with his podcast Stop Podcasting Yourself.

“In a nice twist of fate, my podcast partner, Dave Shumka, was going to go away for a holiday, so we had banked some episodes already,” said Clark, who will try to keep recording the podcast. “As long as we can find a safe way to do it, we will continue to do it.”

Clark doesn’t avoid sensitive topics in his comedy, especially when it’s something that affects all levels of society.

“This is a thing that everyone is thinking about, so you can’t not mention it, because then you’ll look like you don’t know what’s going on,” he said. “You’ll be like Jared Leto.”

The Hollywood star recently emerged from a 12-day silent retreat in the desert — completely cut off from all forms of communication — only to emerge into our new pandemic reality.

“To me, that’s the most humour-rich story that’s come down the pipe in the last few days,” chuckled Clark. “I think we seek out humour because that’s the only way our brains can get comfortable with how insane things are. Joking about it takes a bit of the power away from it.”

Rae Lynn Carson is a stand-up comedian and a professional improviser. She regularly performs at Vancouver TheatreSports and in the monthly sketch and improv show Nasty Women.

“At this moment, the gig economy provides 100 per cent of my income,” said Carson. “I have a decent paycheque on its way, but I don’t have any shows booked for the rest of the month, so I’m just going to be living on that.”

She added, “I’m also diabetic, so I have to buy diabetic supplies on top of bills and rent — it’s going to be tight.”

Even with challenging times ahead, Carson is trying to see things in a positive light.

“I’m grateful that I can still make people laugh, even if I’m not making money doing it,” she said. “But I do miss making a room full of people laugh — it’s like ecstasy for me.”

Carson believes that laughter is a great way for all of us to relieve stress and tension.

“I think you need to be able to laugh at the ridiculousness of certain things, like the whole T.P. situation,” she said. “Yeah, maybe last Tuesday, you and Susanne went to the friggin’ store and bought five packs of 24-roll toilet paper and now you’re thinking, ‘Oh God, what the hell was I doing?’ You know what — we all make mistakes and it’s easier to acknowledge those things by laughing about it and just letting it go.”

‘Art is important — and it’s an important thing to support’

Aaron Read regularly performs stand-up at various shows around Vancouver, teaches improv at Blind Tiger Comedy and is also a member of the long-running weekly improv show The Sunday Service.

“I just got a cheque for some commercial work, right before this all happened, which is a godsend,” said Read. “I’m sure a lot of artists, especially in this city, don’t have savings. If I didn’t have this cheque, I wouldn’t have savings.”

Read is all-too-aware of the ground shifting beneath his feet.

“We’re in a weird time, because everyone is trying to pivot online,” he said. “Everyone’s scrambling to figure out how to still make a living from making art.”

His improv troupe, The Sunday Service, uploaded a pre-recorded show to YouTube last Sunday, and set up an Eventbrite page where viewers could donate if they wanted to.

“That allowed us to help out the Fox [Cabaret, which normally hosts the event] with the revenue that they’re losing, as well as paying the staff that would’ve been there and the [audio and lighting] tech person. We also paid ourselves a little bit,” said Read. “It was right at the beginning of social distancing, so I think people really appreciated it.”

Read emphasized that although people are on lock-down, they shouldn’t spend too much time on the internet.

“Don’t be online all the time. Even though it’s really cool and has lots of information, it’s still really toxic,” he said. “All those assholes in the real world, who weren’t online, are now online. So you’re going to get the equivalent of a Donnelly pub flooding the internet right now.”

Despite the negativity of our current zeitgeist, Read is trying to see through the smog.

“People who are hoarding stuff and reselling it, like, capitalizing off of a pandemic, at first I thought those people were disgusting,” he said. “But then I was reading some stuff that was saying, ‘Don’t get mad at those people, because they’re just evidence of how broken our system is.’”

Ultimately, Read believes comedy can help us rise above our present mess.

“I think it’s a good time to exercise comedy that’s about catharsis,” he said. “And for comedy that’s absurd, that’s silly, as a break — not to make you forget, but to take you to another world for a second.”

Referencing the millions of people at home on their couches, Read added: “All anybody is doing right now is self-soothing by watching stuff and listening to stuff. Art is important — and it’s an important thing to support.”