The victim of a violent machete attack is recovering in hospital on Vancouver Island, and a close family friend has since launched a crowdfunding campaign to aid in the elderly man's recovery.
Aug 1, 2019 11:41 AM By: Lindsay William-Ross

Warning: The image below is graphic

The victim of a violent attack authorities say was "completely unprovoked" is recovering in hospital on Vancouver Island, and a close family friend has since launched a crowdfunding campaign to aid in the elderly man's recovery.

The 89-year-old man, identified in the GoFundMe campaign as Comox Valley resident "Bob," had been sitting in his parked vehicle on Fifth Street in Courtenay at about 4:15 a.m. Wednesday when he was approached by a man in his 20s on a bicycle. 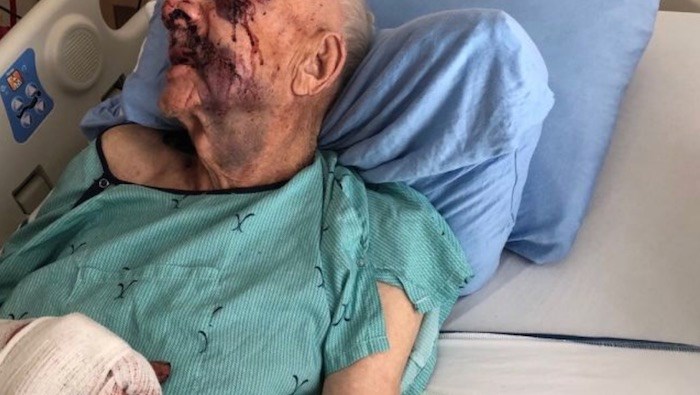 Bob is recovering from a violent and unprovoked attack. Photo via GoFundMe

The man asked for a cigarette. When the victim said he didn’t have any, he was attacked with a machete. He drove himself to the RCMP detachment to report the incident, then was taken to hospital for treatment of several facial wounds.

The victim, Bob, was in the car as part of his newspaper delivery routine - something the GoFundMe organizer, Janelle Karatsikis, says he did for several years alongside her grandmother, who passed away recently. The couple had been together for the last 15 years.

"Bob has a heart of gold and is loved by so many, especially our Grandma who he recently lost," writes Karatsikis.

As a result of the attack, Bob has "multiple slashes to his face," and "multiple other wounds from fighting off his attacker." The 89-year-old has also undergone surgery for his eye.

"It’s absolutely unreal that a human being could do this to another," adds Karatsikis.

Loved ones say they have had an overwhelming number of people asking how they can offer Bob help, which is why Karatsikis created the GoFundMe page late Wednesday.

"Any money raised will help him in his medical recovery both physically and mentally," she adds. "Any extra funds will be donated to a charity of his choice."

So far, the campaign has brought in nearly $13,000 in donations.

The suspect in the attack has been described as being young, possibly in his 20s with a dark complexion, wearing something on his head, say authorities. The suspect was riding a bicycle.

With files from the Times Colonist

To my teenaged self: An Afro-Indigenous woman’s contribution to Tegan and Sara’s new video
Aug 1, 2020 11:30 AM