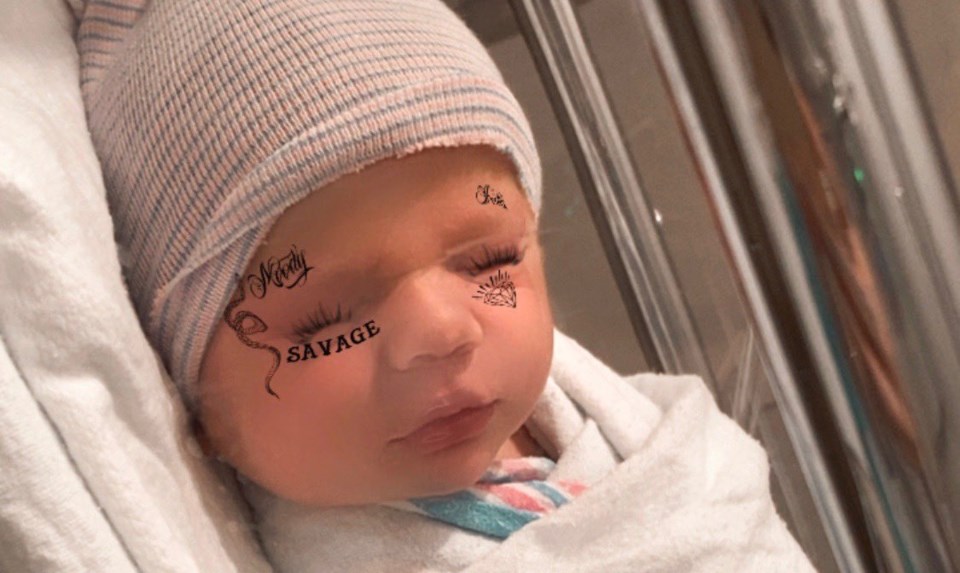 Elon Musk shared this 'enhanced' photo of his newborn son via Twitter on May 4, 2020. Photo: @elonmusk/Twitter

The internets have been having a field day with the birth "announcement" of the son of Vancouver-born musician Grimes and her billionaire boyfriend Elon Musk.

The L.A.-based supercouple welcomed their son Monday, but it is the unusual name for the new arrival that has people around the world talking.

When pressed for the baby's name on Twitter, Musk replied "We already know it, but can't tell."

Grimes (born Claire Elise Boucher) took to Twitter Tuesday to explain - or, better said, break down - the components of the moniker:

•X, the unknown variable ⚔️
•Æ, my elven spelling of Ai (love &/or Artificial intelligence)
•A-12 = precursor to SR-17 (our favorite aircraft). No weapons, no defenses, just speed. Great in battle, but non-violent 🤍
+
(A=Archangel, my favorite song)
(⚔️🐁 metal rat)

There have been over 10,000 responses to her Tweet, including from the baby's father himself, who corrected his son's mom by noting the aircraft is actually the SR-71.

Here's the rest of their (public, tweeted) exchange:

There have also been an array of gifs, memes, and retorts to Grimes' explanation ("Did u name ur son metal rat" is a highlight) as well as some praise for the couple.

The real bad news, however, is that little X Æ A-12 Musk might not get to keep that name.

One of California's naming conventions is that the name must be comprises solely of letters from the 26 letters of the alphabet. While the hyphen is okay (as would be an apostrophe), the parents of any would-be Beyoncés in the Golden State can also tell you accents are not allowed on the birth certificate.

While a lot of people are still wondering how the heck to pronounce the name - let alone if it will stand under California law, someone has geeked out and come up with an explainer for how to say the name, which could sound like "Sascha Archangel."

the name for the ligature Æ is “ash”, the Lockheed A-12 was part of the Archangel internal design effort.
when you combine the X, ‘ash’ and A, the name could actually be pronounced ‘Sascha 12’.
the baby's name is Sasha Archangel and frankly, i don't wanna mess with this alien. https://t.co/jAofgDAZ7e

We'll have to wait and see if Grimes and Musk are indeed trolling us all, what they end up putting on the birth certificate, and how to actually say the name out loud.