While it might be something people ponder, most men wouldn't risk getting kicked such a sensitive area to figure out the best way to handle the impact.
Jul 23, 2019 9:22 PM By: Elana Shepert 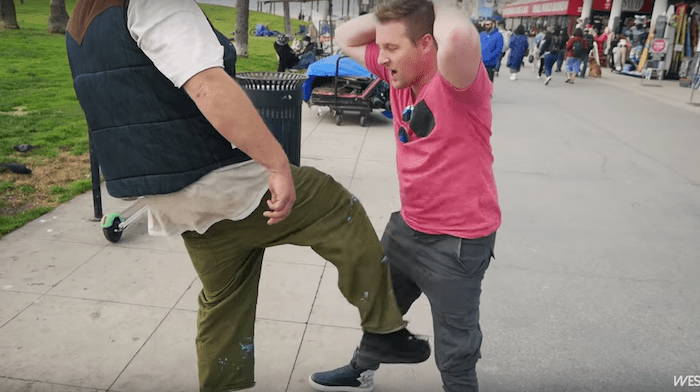 "I've always wondered: How do people get kicked in the balls in the movies?"

While it might be something people ponder, most men wouldn't risk getting kicked such a sensitive area to figure out the best way to handle the impact.

But not Wes Barker.

Born and raised in Langley, Barker, 33, has a penchant for pushing the envelope. In fact, he's made a career out of doing things most people wouldn't even consider. From getting buckled in straight jackets to chewing light bulbs to walking on broken wine bottles, Barker has an impressive daredevil resume.

As for getting kicked in the groin, Barker recorded his attempt, along with his preparation, in a video for his YouTube channel.

"Always funny, never not funny," notes Barker in the video. "I've come up with a contraption that allows me to get kicked in the nuts by strangers."

Barker's 'protective contraption' includes duct tape, a thick sock, and a strap, and he explains how it all gets put together before he takes to the streets. Following this, he asks people on the street to test the device, but some people simply won't do it. However, he finds a number of willing participants, and, at times, he even asks the same person to repeat their kick.

While Barker's 'ball-kicking' experiment has over 2 million views on YouTube, he also regularly performs magic and comedy shows across Canada.

"Comedy was one of my first loves. I grew up watching Robin Williams, Adam Sandler, and Eddie Murphy, so I love stand up comedy," Barker told Vancouver Is Awesome. "I actually do shows in comedy clubs in Vancouver."

And while Barker isn't always performing comedy, he says he injects a great deal of comedy into his magic. He fell in love with magic at 19, and would regularly practice tricks on his lunch breaks. Barker became a full-time 'stunt-magician' at 25 and he's never looked back.

"I was really inspired by David Blaine and his approach to street magic. Of course, I also love Houdini. He was a legendary escape artist."

Barker will perform his magic show at Adult Night at Playland on Friday, July 26 at 10 p.m.