When William Walker's classmates danced and celebrated at prom, he was already kilometres out at sea.

The thought of the prom had floated far away from the then 16 year old’s mind. Walker had left high school behind early and joined the Canadian Navy, a time he now describes as “pure bliss.” 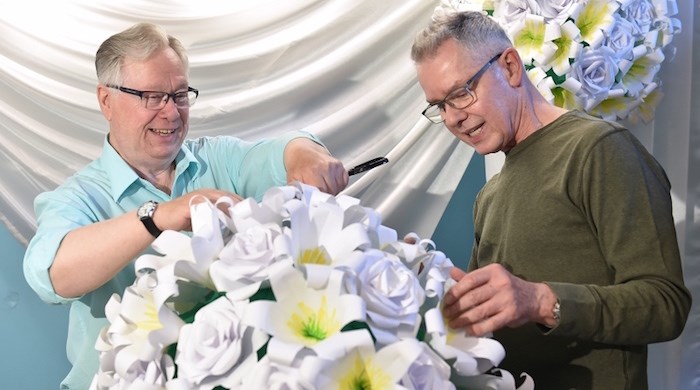 William Walker and Grant Kayler work on the flower arrangements at the Roundhouse community centre. Photo by Dan Toulgoet

Looking back, the 71-year-old Vancouver designer said he had “no regrets at all” about missing the event.

“There are a lot of us older senior citizens who, back in the day of our youth, didn’t have a chance to go to prom with someone we wanted to. So consequently a lot of us just skipped it.

“It was always depressing, but that’s why I joined the Navy – Hello!”

Now, after all these years, those LGBTQ2S elders (55 +) who missed out on the milestone have a chance to recreate the moment, and the community is invited to help them celebrate.

This Friday, June 7, The Roundhouse Community Arts and Recreation Centre hosts a Queer Elders Prom Night as the closing event of the Older and Creating It arts and culture exhibition.

The event was organized with the help of members of the Rainbow Roundtable, an over 55 support group at the Roundhouse, who meet to discuss stories, wisdom and experiences of the challenges with aging in the LGBTQ2S community. 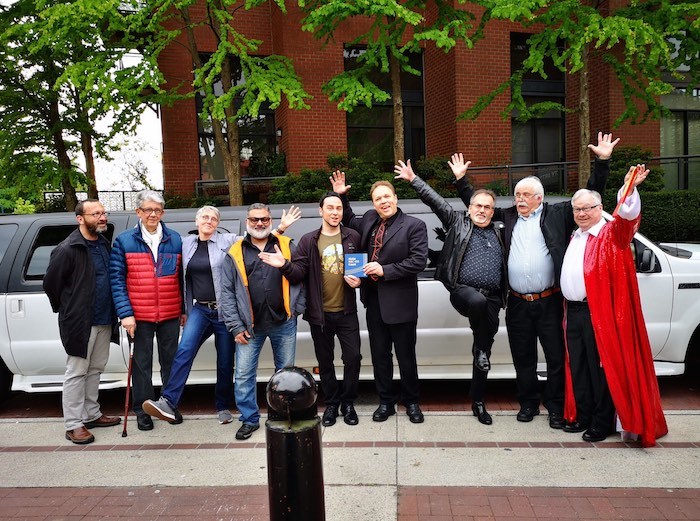 Travis Jones, group facilitator of the Rainbow Roundtable, said the event was a chance for many people in the community to have “a fun do-over” of their prom.

“I think historically our community may not have had fantastic experiences with their first prom,” he said.

“I didn’t go to my prom, and from talking to some people of this age group in our community, that’s a pretty common response.”

He said it was also a chance to have an event focussed on, and in support of, LGBTQ2S over 55 year olds who may sometimes feel isolated.

Walker, who is now a member of the Rainbow Roundtable, described Travis as a “lifeline” for many queer elders.

“I joined because it’s a community,” he said.

Having lived in Vancouver since 1968, Walker has witnessed Davie Street slowly change over the years and assimilate more with straight society, as many of the LGBTQ2S establishments and community members had been forced to shut down or move out because of high taxes and rents.

He said he absolutely loved being part of the group – and it's “a lot more fun than sitting home and watching television on a Friday.”

Walker, who was a wedding dress designer for 30 years and now creates custom made hats privately, has been putting his creative talents towards organizing the prom’s decorations with a team, and designing his very own gown for the night.

He’ll be dressed in drag, in a glamorous turquoise and royal blue iridescent gown complete with layers of bridal tulle.

The decoration theme for the prom was inspired by a Barbra Streisand concert Walker went to at Anaheim's Arrowhead Pond in 1994.

The room will be decked out in white. There will be huge paper flower arrangements in urns, white satin swags hanging from the ceiling, a six foot diametre chandelier in the middle of the room and, of course, a shiny disco ball.

“It’s magic,” Walker said. “I just think up the idea and create it.

“I have had a crew of three other fellows working with me for the past two months on making the decorations. It’s wonderful. It’s very bonding.

“It keeps me high on life being creative.”

In true prom tradition, the DMS Vancouver will crown a Prom King and Queen in regalia on the night.

There will also be plenty of entertainment, including a drag performance by Empress XXIV Sushi Bar, dance lessons by Not So Strictly Ballroom Queer Dance, music by DJ K-Tel and a photo booth by Beau Photo.

Walker encourages the community to go to the prom and have a little fun.

“Give support to the older queer people,” he said.

Cost: $10 or by donation. All are welcome to attend the 19+ event. The first 80 guests will also receive a free fuzzy Prom-pom keychains.