Holly can’t stop laughing with Roger around. I get the sense she’s been laughing since they met almost 10 years ago.
Lindsay Glauser Feb 11, 2012 10:03 AM 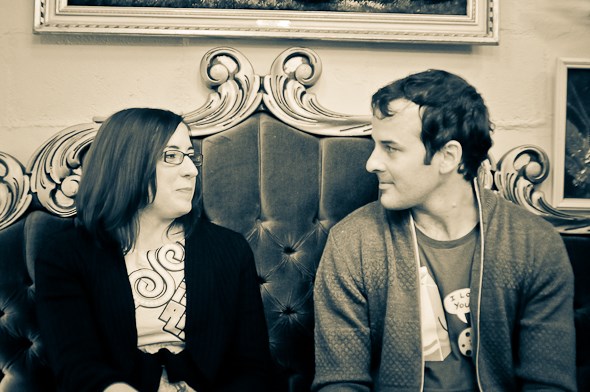 How long ago and how did you meet?

H: We met nine years ago…

R: Which is not there anymore. Thursday nights?

R: I always worked weekends, so Thursday was the night to go out and get drunk. Pick up chicks.

H: But usually there weren’t that many good looking guys there that night, but that night there were a bunch of good looking guys, and then my girlfriend said “Oh look at that guy!” and I looked up and it was Roger going towards the bar. And then she got off the dance floor to have a cigarette, and I was dancing by myself and I looked up and he was dancing in front of me, and smiled down at me. Just yesterday I was just saying “Did we actually even say anything before we started making out?” I don’t think we did (turning to Roger).

H: I always say it’s our one night stand that has been going on for 9 years.

R: We weren’t really hammered or anything. We had a few drinks and then we went home and started drinking tea.

What drew you to each other?

R: I think it was her smile.

H: Obviously, it was a big attraction right at the beginning and after that, it is just that Roger makes me laugh. We have a lot of fun together. ..And Roger had big, curly hair and he was super cute.

What’s the last thing he/she did to make you smile?

R: (To Holly) We had a big giggle with that Thirsty thing…

H: (Bursts out laughing!) I think that’s just us being weird and giggling in bed!

R: I was thirsty in bed, yeah, we were just hanging out reading or kissing and drinking water and I said Kissing McThirsty. I said it like a name. And we started laughing for like 10 minutes. Actually (Holly) started laughing. I had to write it down in a notebook so I could remember what was so funny about it; and today I looked at that notebook and thought it’s really f*cking stupid actually. 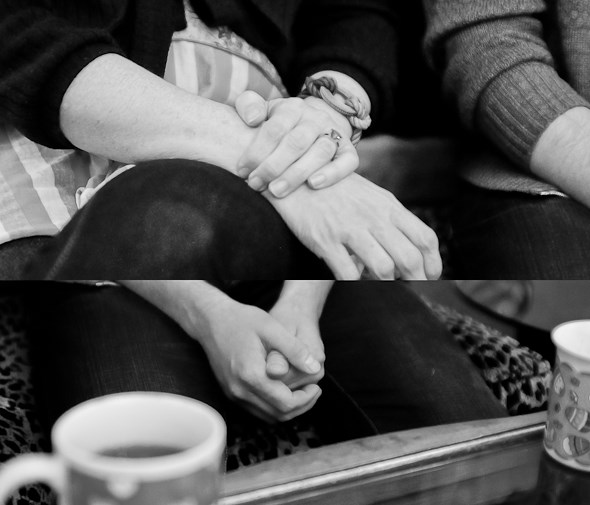 What are some special moments or memories that you still talk about?

H: I had a meeting in San Diego. And we were only dating for a few months, so I thought should I ask Roger to come with? I asked Roger to come and we had so much fun. We went a little bit early and we stayed the night in a hostel, and then stayed in the fancy hotel that the drug company was putting us up in. We went surfing and wandered around and took a cajillion photos. Totally geeked out that way.

R: It was really cool arriving at the hotel, and we were all in summer outfits, salty hair, and sweaty and dirty. And Holly checked into the convention, and the receptionist was like oh wow you’re the first one that is young and casual…

H: It was at the Hotel Del Cornado. It’s a very famous hotel in San Diego. They filmed “Some Like It Hot” there with Marilyn Monroe. I loved to travel and so it was really important to me for us to travel and have fun, and so this trip was pretty momentous. 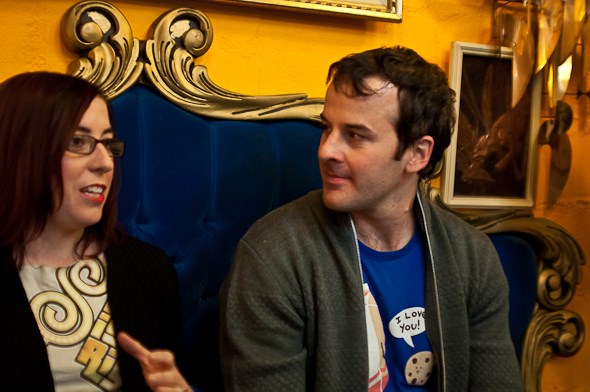 H: Another trip we got to go to was to on was to Morrocco. That was Roger’s first time in a developing country. He loved it: the first night he was asking the waiters how to speak Arabic, and you were making friends with everybody. And we were sitting on the beach of Essaouira , on the coast in Morroco, and Roger said “Thank you so much for opening my eyes to what the rest of the world is like.”

H: And our wedding was pretty amazing. We got married in Kauai and (the ceremony) was really small. We were trying to figure out where we were going to get married and we were looking around.  We went to this one beach with his family, and his dad looks up and there was this heart-shaped cloud, and he said,  this is it Holly, this is where we’re getting married.  That’s where we did the ceremony.  It had been raining a bit so the beach was clear, but during the ceremony we had a sunset on one side and a rainbow on the other. It was really magical. 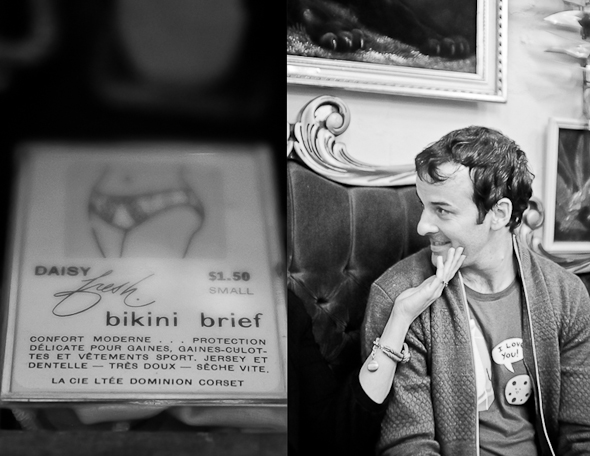 Do you still date?

H: We try to especially because we work together all the time.

R: Even if it’s just a movie or a dinner and a movie.

H: We like to go to Tinseltown and then go over to the Keiffer for a drink. We go to concerts too. We do a lot of date nights at home too. We like cooking and we play games. Roger’s my sous-chef. He chops everything, and then I’m like “Get out” because our kitchen’s so small.

R: And then I get to wash all the pots and pans afterwards.

H: Thank you….He’s the latte maker in our relationship. He brings me lattes in bed every morning. 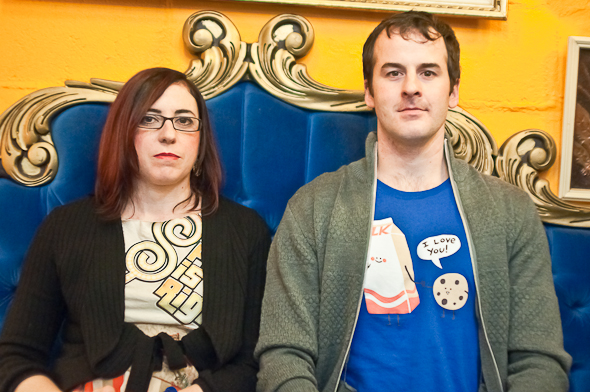 What’s the secret to your relationship?

R: Especially for that monthly time you need patience. Not a week ago.

R: We talk-talking things out.

H: Yeah, talking is key…and making each other laugh. Having a good sense of humour.

H: I was totally joking the other day that Roger plays poker and he goes once or twice a month, and I say that saves our marriage. It’s nice to have that time apart.

I have a time machine—what is the one thing that you would tell yourself about your partner before you met?

H: I guess I would say to trust that it was all going to work out. Because this was my second marriage, I was married once before and I was very leery when we met that it would be okay. It took me a long time to trust (Roger).

What is the one thing he/she does that makes you crazy?

H: A little therapy session? (pause) Roger likes to change where things go. You know you have spots where things go in drawers, a wooden spoon or whatever and it’s always in a different spot. (She turns to Roger.) You can say what you want to say.

Roger: Holly goes crazy once a month. I don’t need to say more.

Holly: Yes, well it’s getting worse as I get older. 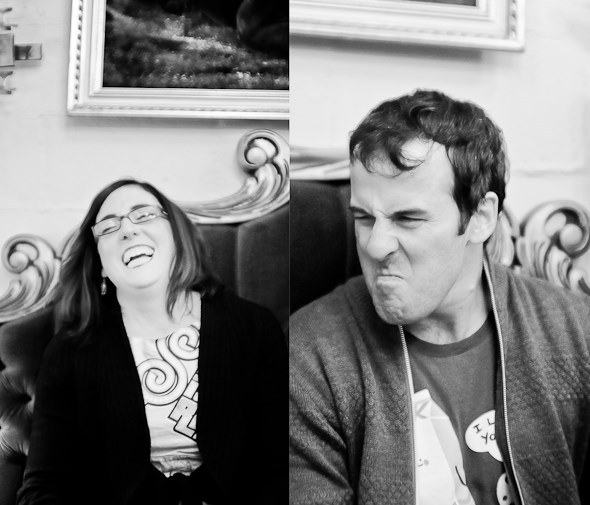 How do you know when he/she is upset?

R: What do you call it the bitch face?

H: Yes, the bitch face. You just get really quiet. It takes a little bit of probing sometimes.

What do you do to cheer him/her up?

H: (Laughs) We had a really bad fight one time, and he pulled out his ukulele and played me a song.

R: A really bad one. I don’t even know how to play the ukulele.

H: That’s all I do to make you happy? To cheer you up?

R: Oh other things too, but we don’t have to talk about it. 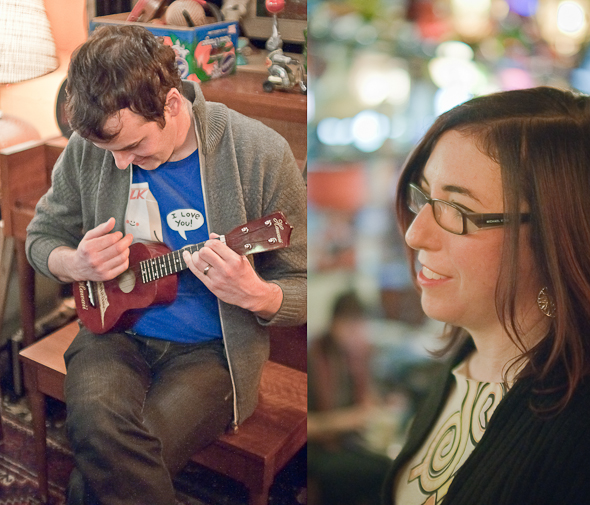 R: I think it’s much more than just a word.

H: This sounds crazy, but with our work, we celebrate love all the time and it’s pretty awesome to be with our

love for them and then watch them grow and have babies.