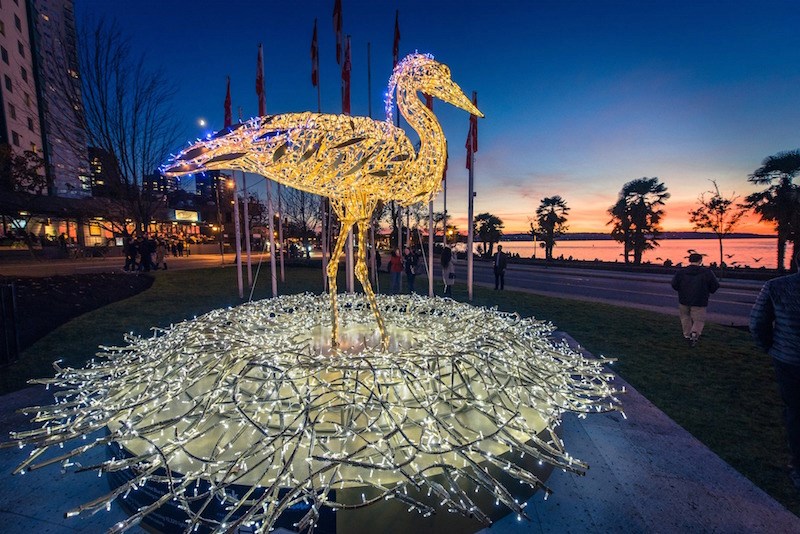 Stanley, a heron, is among the light installations returning to the West End this November for Lumiere 2020. Photo: Lumiere Vancouver/Facebook

With so many annual events across Metro Vancouver having to radically alter how they bring people together or opt to cancel entirely due to COVID-19 restrictions, there are still some that will be able to go on. One of those events is Lumière Vancouver, which finds special illuminated installations set up in the West End for the public to enjoy.

You'll catch some familiar sights if you head down to check out the event, which runs from November 5 through 30.

At the foot of Denman Street will be "Davie" the 24-foot grizzly bear. There will also be the nature-inspired sculptures at English Bay: Luna the whale, Stanley the heron, and Eugenia the tree. These light installations "pay homage to British Columbia’s wildlife community," according to organizers.

Lumière will also feature a new light installation this year. Prismatica was created by RAW Design and is made up of countless colourful giant prisms where visitors can walk through and observe city life in every colour of the spectrum.

“Lumière is again pleased to be able to bring stunning light and art to the West End. The lighting displays are beloved by locals and visitors alike, and we hope Lumière will add a bit of glow to the dark winter season as the year draws to a close” said Stephen Regan, Executive Director of the West End BIA, in a media release.

For 2020, Lumière Vancouver will run for more days than usual so that people have plenty of chances to check out the installations and do so while maintaining a safe physical distance from others. Some of the installations are also expected to remain in place for the entire winter.

Additionally, Lumière will offer special activities in the area aimed at "creating a fun and festive atmosphere that can be safely enjoyed by individuals, families, and small bubble groups of friends."

You can put on a Halloween-themed play at home with this mini kits from a Richmond theatre
Oct 11, 2020 2:26 PM

Taste of Yaletown announces participating restaurants for this year's event
Oct 10, 2020 9:56 AM

Fly across Canada like a witch on this thrilling Halloween ride in Vancouver (VIDEO)
Oct 7, 2020 1:47 PM

Prepare to be slayed at this haunting Halloween-themed amusement park in Metro Vancouver
Oct 6, 2020 9:00 AM
Comments
We welcome your feedback and encourage you to share your thoughts. We ask that you be respectful of others and their points of view, refrain from personal attacks and stay on topic. To learn about our commenting policies and how we moderate, please read our Community Guidelines.