Praise be for Vancouver music fans, though, for every once in a while, Mark "Kleinz" Kleiner returns to this dripping den of sin to show us he can still run with the devil and rock out.
0
Mar 25, 2019 2:41 PM By: Grant Lawrence

You could always hear the party raging from about two blocks away.

1634 E. Georgia was a run-down dump of a flophouse, a classic 1990s East Van rental that served as the resident band dwelling for Sister Lovers, a coulda-woulda-shoulda-been-huge indie pop group that channelled Big Star, Cheap Trick and the Raspberries rolled into one whacked out, dysfunctional, brilliantly drunken train wreck.

The lead singer of Sister Lovers was Mark “Kleinz” Kleiner, one of the all time great characters from the 1990s Vancouver music scene, who often served as the hilarious and wasted ringmaster of the house parties. 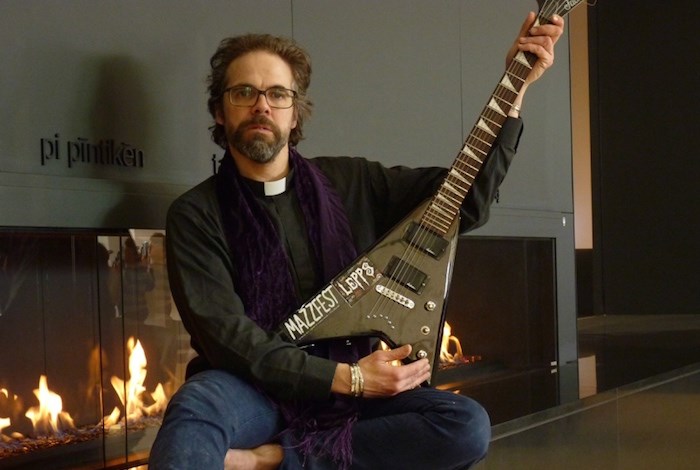 “That was back in the days of three-figure rent in Vancouver,” chuckled Kleiner. “I think we paid about $820 a month for that place, split between five people and two more in a shed out back. That house is long gone, it’s a row of townhouses now.”

One of the most infamous bashes I ever attended at 1634 was when a second-floor deck collapsed with about 30 people on it. Miraculously, no one was hurt. That ridiculous moment could be a metaphor for Kleinz’s music career in this town: right when everything seemed to be the most awesome, things tended to fall apart.

Kleiner has cheekily referred back to his Vancouver musical legacy as “a footnote to a footnote,” but despite often being his own worst enemy back then, Kleiner is selling himself short: he’s always been an excellent lyricist with a natural ability for power pop songwriting. Sadly, Sister Lovers fizzled out before the ’90s were through without an official album to their name. Somewhere there is a lost and very brilliant demo tape.

“I carried a lot of anxiety back then,” recalled Kleiner. “Alcohol helped me to socially relax, but nothing ever got done. There were so many nights during that period of my life where I was blackout drunk and horrified to learn what I had done. I knew Sisters Lovers blew a lot of opportunities that came our way.”

In the late ’90s, Kleinz looked poised to break out, this time with his glam-rock quartet Jungle. And yet, on the eve of their much-anticipated sophomore album, Kleinz infamously fled town. Fans and friends were stunned to find out that it was to study theology, which to many seemed like an extreme about face. But band members and close friends knew that Kleiner had been drifting towards the church for a few years. Both of Kleiner’s parents were ministers.

“Some of the Vancouver music media made a big deal of it at the time, that I had been called away by God and all that, and from the outside it did look like a 180,” admitted Kleiner. “But to become an ordained minister is a long process, and it’s something that I had been considering for years.”

Kleiner briefly returned to Vancouver in the early 2000s to form the great Mark Kleiner Power Trio before heading home permanently to his native Saskatchewan in the wake of his dad’s death to follow in the family business of serving the Lord. Kleiner is now a father of four and an ordained Lutheran minister, looking after a congregational flock at an Anglican church in Saskatoon.

Praise be for Vancouver music fans, though, for every once in a while, Kleinz returns to this dripping den of sin to show us he can still run with the devil and rock out.

“I can count on one hand the number of times I’ve played Vancouver in the past 20 years,” Kleiner told me. “I consider myself a Vancouver indie rock casualty. I hit rock bottom, but it’s rewarding to come back to town sober, with a clear mind and heart.”

For Kleinz’s musical disciples, his rare upcoming Vancouver show this weekend is nothing short of biblical. For the first time ever, it involves incarnations of all of Kleinz’s former bands on one bill. Fittingly, it’s at Kleinz’s former hall of worship, where he first started to see the light at the end of the ’90s: Spirit of Life Lutheran Church at 375 West 10th Avenue.

The show, which is billed as Mark Kleiner with Jungle, Sister Lovers, and the Mark Kleiner Power Trio, is this Saturday March 30. There’s a potluck starting at 6 p.m. and the rock show goes down at 8 p.m.

That’s not all: Kleiner will slap on the collar and be back at Spirit of Life Church the very next morning at 10 a.m. to give the sermon and lead a children’s concert at 1 p.m.

All proceeds from the weekend’s events will be split between charitable refugee efforts in both the Lower Mainland and Saskatoon. The shows are free and all are welcome, though a $20 donation is suggested.

And while this weekend definitely won’t be as unhinged as those lost nights back at 1634 E. Georgia, sweet Jesus, that’s probably a very good thing.