The retired local has ridden in one of the gondola's 30 cabins to the summit 885 metres above Howe Sound a total of 1,317 times since it opened in May of 2014.

That is almost daily.

And yes, he says, he is one of those people who like to keep an accurate tally of such things.

One of his two granddaughters, who visit from Maple Ridge, has been up 250 times, he said.

"The place meant everything to those girls," he said. "They didn't come here to see us, they came to go up the gondola."

Brubacher had visited Aug. 9, the day before the cable was cut and 20 cabins fell to the forest below.

He was confused and sickened by the news that his favourite attraction had fallen victim to sabotage.

"We drove out to the [Newport] lands so we could look over. I can't describe the feeling in my stomach... you could see the cable down — you could see cabins in the trees," he said. "It has been really hard."

The Squamish RCMP confirmed on Aug. 23 that the gondola's main cable was deliberately cut in the early morning hours of Aug. 10 and that there are no other natural or mechanical reasons for the cable to have failed.

Brubacher and his wife Sue didn't sleep much the week following the closure, Brubacher recalled.

"It is such a huge part of our lives," he said, adding the couple loved going up year-round, including for snowshoeing in the winter. "We are on a first-name basis with everyone there... We knew so many people who were instantly impacted, much worse than us because their jobs were at stake."

Brubacher said it is critical whoever cut the cable is caught and held accountable.

"Because until they do, that person is still out there and that is a really scary thought," he said. 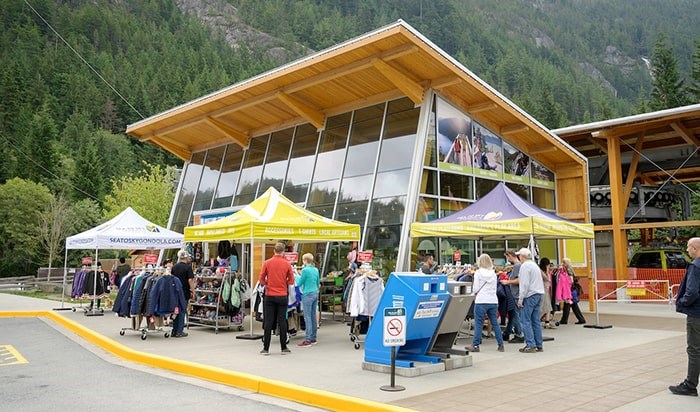 Basecamp at the Sea to Sky Gondola was busy Saturday as the retail store, guest relations and cafe reopened. – David Buzzard

Though the gondola is set to reopen in the spring, Brubacher wonders if he and Sue will ever again see some of the employees they have gotten to know over the years.

Some will likely have to move on permanently, he said.

But he has been able to catch up with some familiar faces recently.

As of the Labour Day long weekend, the Basecamp Cafe, Retail store and Guest Relations are open.

Brubacher was there on Saturday and said the return was emotional.

"Just seeing everybody and making that connection again," he said.

To show their support for everyone at the gondola, he and Sue will have their coffees at the cafe in the morning as often as they can.

Ken Bailey, a spokesperson for the gondola, told The Chief that for the foreseeable future, the Basecamp area will be open daily. Guest Relations and the store will be open from 9:30 a.m. to 5 p.m.

For reconstruction work, there will be intermittent closures that will be posted on the Sea to Sky Gondola Facebook page.

The Sea to Summit Trail remains closed, however, the Connector Trail between Shannon Falls and the Stawamus Chief is open.

Bailey added that tourism industry friends of the gondola are offering those with Sea to Sky Gondola passes complimentary access to such attractions as Grouse Mountain Skyride, Vancouver Lookout at Harbour Centre, and Vancouver Aquarium.

"This is in addition to some of the fantastic deals local businesses have offered our pass holders," he said.

Once the attraction reopens, Brubacher will be one of the first in line to ride to the top, he said.

"If they'll let me," he said, with a laugh. "We can't be the only people that it has brought so much into our lives, which makes the loss of it so much more painful. But we'll be back."

Anyone with information regarding the cutting of the cable at the gondola is asked to call the RCMP tip-line: 604-892-6122. Alternatively, anonymous tips can be provided through Crimestoppers at 1-800-222-TIPS.

*Please note, this story has been updated since it was first posted to include police investigation information and contacts.