B.C. man who scaled Everest says climb is not for 'faint of heart'

VANCOUVER — When Chris Dare stood on the roof of the world he had tears behind his goggles.

The British Columbia man has climbed mountains on seven continents in less than 10 years, but last week he feared he wouldn't make it down the 8,848-metre peak of Mount Everest.

Dare, 35, who's an officer in the Canadian Armed Forces, said he stood atop the peak for about 10 minutes last Thursday, taking in the majesty of his view. 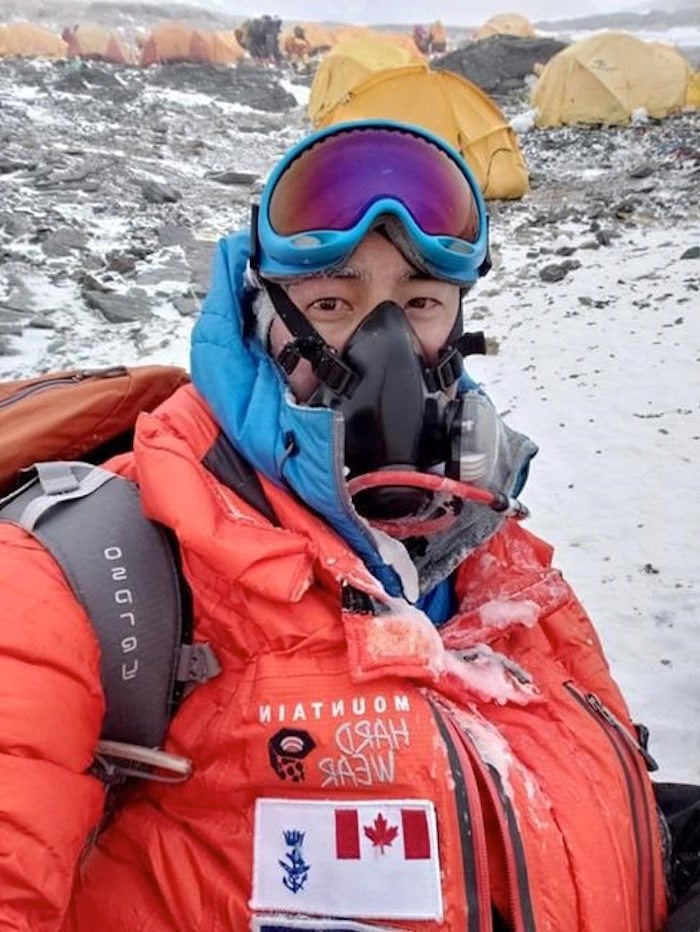 When Chris Dare, shown in this image from his Facebook page, stood on the roof of the world he had tears behind his goggles. After nine years and mountains on seven continents, the British Columbia resident who is an officer in the Canadian Armed Forces climbed the 8,848-metre peak of Mount Everest at 9:30 a.m. Nepal time on Thursday.THE CANADIAN PRESS/HO-Facebook-Chris Dare

"It's incredible," he said. "You know I've been on the top of tall mountains before, but I mean the Himalayan Mountain Range is majestic and large, and it was an incredible view to see. It really was."

The climb came at a cost.

"It's a very bittersweet end to my summit challenge and summiting Everest is great but seeing friends hurt and people dying is really hard," he said in an interview from his base camp on the north side of the peak.

Eleven people on the mountain have died this season, the highest number since 2015. Most are believed to have suffered from altitude sickness, which is caused by low amounts of oxygen at high elevation and can cause headaches, vomiting, shortness of breath and mental confusion.

Permits were issued to 381 people in 44 teams, the highest number ever, according to Nepal's government.

But the weather window was too short and there were too many hikers trying to ascend at the same time, said Dare, who is from Victoria.

"At that moment too when I realized that the wind started picking up when I tried to take a photo with some of the flags I brought up, I realized we were in real danger and we had to get out of there."

Winds on Everest reach 100 km/h and temperatures dip to -60 C. Climbers wait for the weather in mid-May when the jet stream shifts, allowing them to reach the peak in better weather, Dare said.

He said they estimated time to reach the peak at about six to nine hours and three hours to get down.

The crowds prompted Dare and the rest of his 360 expedition to leave about two hours early.

Other groups left even earlier, he said.

Climbers got stuck near the summit when the high winds and freezing temperatures returned, he said.

"It pounded us. It was a harrowing day."

A member of his team had a difficult time on the climb and was found dead in his tent the next day, he said.

"I almost didn't make it back. I had my incredible sherpa," Dare said.

"However the difficulty level I found on Everest far exceeded that of any other seven summits," he said. "The only way you can understand how hard it is is by climbing that 8000-metre mountain."

Dare is the 23rd Canadian to climb all seven mountains and only 416 people have achieved the distinction. He is raising money for BC Children’s Hospital, a dollar for every metre he climbed.

Once only accessible to affluent, elite mountaineers, Nepal's booming climbing market has driven down the cost of an Everest expedition, opening it to hobbyists and adventure-seekers.

Nepal doesn't have any regulations to determine how many permits should be issued, so anyone with a doctor's note can obtain one for an $11,000 fee, said Mohan Krishna Sapkota, secretary at the Ministry of Tourism and Civil Aviation in Nepal.

It's important that people realize how much of a challenge Everest is, he said.

Slow, inexperienced climbers compromise the safety of those around them, creating a line of climbers, it's "extremely irresponsible," Dare said.

"People should climb mountains, explore, challenge themselves but there's a time and place and need to train first before you tackle an 8000-metre mountain."

Dare said he would not be going back.

"I lost a member of my team. He was a great guy. I saw my friends struggling at altitudes without oxygen because of the long queues, they ran out of oxygen, had to be rescued, barely survived. There's too much tragedy here despite the successful summit that will want me to return."

- With files from the Associated Press.