The final stage in guitar production – the finishing – is critical. It takes a steady hand and laser sharp focus on the part of the luthiers.
0
Jun 21, 2019 3:58 PM By: Maria Spitale-Leisk 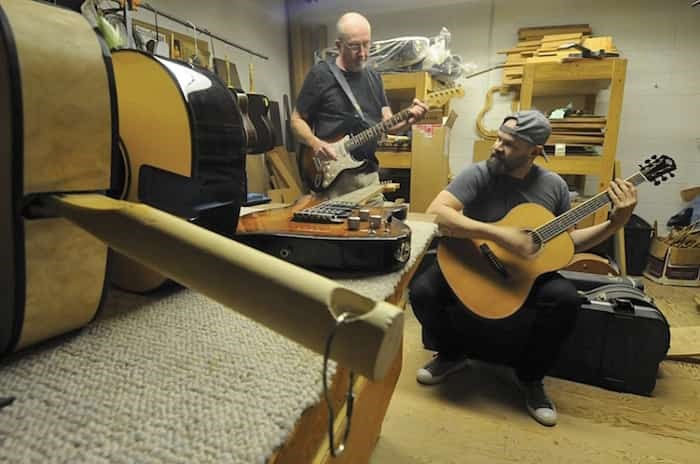 Like a closing pitcher ready to seal the deal, guitar finishers thrive on perfection.

The final stage in guitar production – the finishing – is critical. It takes a steady hand and laser sharp focus on the part of the luthiers. An extra iota of lacquer can affect the tone, durability and playability of the instrument.

“One of the big challenges, I’d say, is trying to achieve a thin finish,” says luthier Rob Bustos, moving around the top floor of an industrial building behind Capilano Mall.

Dental tools, including the fear-inducing scaler, are readily accessible to fix the tiniest of imperfections on a shapely wood body.

An imposing figure in the dusty workspace is the workhorse of their finishing operation – a buffing wheel – which gives the guitar a nice polishing.

Bustos has a storied history with this space. In 1977, his dad started a custom cabinetry business, occupying the bottom floor of a brand-new building at the corner of MacKay Road and West Third Street.

“So, as a child, I actually helped him build the stairs and stuff,” recalls Bustos.

Father and son worked  side-by-side during summer break making cabinets, with Bustos joining the family business full time after graduation. His side gig was playing guitar in a bunch of heavy metal bands.

At one point in 1993, Bustos climbed the stairs to the top floor of his dad’s building and saw a diamond in the rough – amidst all the clutter. He cleaned up the space to make it hospitable for building electric and acoustic guitars.

A few years later, Bustos began working at Larrivée Guitars in Vancouver. He co-founded the Larrivée Research and Development team, affording him much insight into the building process.

The axe player stumbled into the Larrivée factory while on a mission – and walked out with a job.

“I was gigging at the time and had a couple of guitars stolen, so I went to look for electric guitar parts at Larrivée – just to slap a guitar together and keep rolling,” explains Regehr. “Then I realized I could use a job, job. The musician thing wasn’t really paying the bills.”

Regehr started out as an apprentice, sanding and shaping guitar bodies, before landing his painting role.

When Larrivée relocated five years ago to the U.S., Regehr became a free agent.

Bustos had gone out on his own by then, starting his own guitar-making company in that familiar space on West Third. Well aware of his handiwork, Bustos tapped Regehr, a fellow Windsor Secondary alumnus, to form Vancouver Guitar Finishing.

The luthiers have managed to carve out a niche for themselves, through the art of finishing.

Bustos initially thought sealing guitars was going to be a side gig to building them.

“But [guitar finishing] became that baby that you have to feed and nurture,” he reveals.

Anyone walking by the non-descript building would be oblivious to the magic going on inside.

Naked guitars are routinely delivered here from around the world. Vancouver Guitar Finishing has caught the eye of builders in Europe, Asia, the U.S., Africa and Australia.

“We get all kinds of funky woods,” says Bustos, running his hand across the smooth back of a guitar made from Mexican Ziricote wood.

After a thorough exfoliation, the guitar gets put inside a spray booth equipped with guns loaded with different colours and clear coats. A special polyester finish that these luthiers use can be dried instantly under UV light, affording them a quick turnaround time.

Bustos and Regehr will be giving a workshop on modern guitar finishing during the Vancouver International Guitar Festival on June 29.

In this DIY culture we’re living in, Bustos says you can “absolutely” build your own guitar. Some professionally made kits even emulate high-end guitars.

As Bustos explains, hobbyists will put all their energy and love into building the guitar, and then ruin it in the finishing stage.

“Finishing is like black art where it’s very confusing,” says Bustos. “It’s hard to understand how to achieve a proper finish.”

Anyone who owns a spray booth might be interested in talking technique with Bustos and Regehr at the guitar festival. The event will bring together guitar builders, players, collectors and aficionados for two days of live music, master classes, special events, and the opportunity to see, hear and play some of the world’s finest handmade stringed instruments.

Back in North Van, many menacing-looking tools lay about the luthiers’ lair. Bustos isn’t bothered.

“I’d rather hurt myself than one of these beautiful instruments,” he says.