This is why B.C. teachers will likely go on strike. Again

Two old issues have emerged to potentially thwart any chance the BC NDP government has of being able to negotiate a new contract with the B.C. Teachers’ Federation without some kind of strike action.
0
May 21, 2019 7:06 AM By: Keith Baldrey

Two old issues have emerged to potentially thwart any chance the BC NDP government has of being able to negotiate a new contract with the B.C. Teachers’ Federation without some kind of strike action.

I refer to the thorny issues of class size and composition. These two issues have dominated every round of contract talks for decades and they are doing so again in this round, which began back in February. 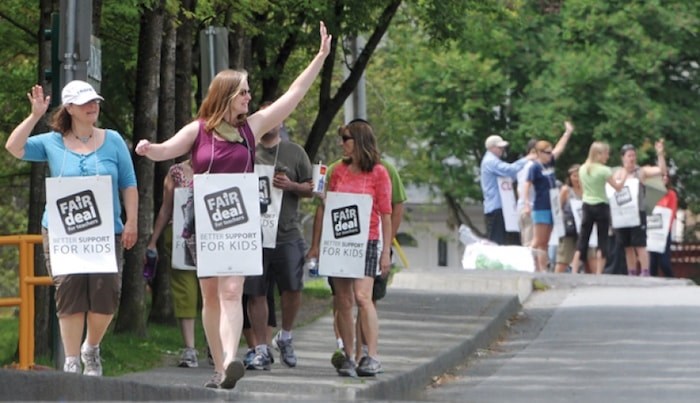 Will we be seeing this again in September? Photo by Mike Wakefield/North Shore News

The BCTF won an important high court decision several years ago that reinstated the language defining those two issues after it was “stripped” out of the collective agreement by the BC Liberals in 2002.

The employer group – the B.C. Public Schools Employers’ Association – spent the past two years canvassing school districts and superintendents about the effects of that language in the classroom. The near-universal reaction was the language was virtually unworkable, as it was rigid and restrictive.

The BCPSEA has now proposed new contract language around class size and composition to give school districts more flexibility. Strict ratios would be replaced and superintendents would have more power to “break ties” when the union and the employer could not agree.

The BCTF went ballistic. The union feels the contract language restored by the Supreme Court of Canada (the court did not rule on the merits of the language, just that it was wrong for the government to arbitrarily remove it) is now there for perpetuity.

The employer argues that’s nonsense and the court was simply saying the language was indeed restored, but was also subject to further collective bargaining.

Given that the language has been the subject of relentless grievances by the BCTF – costing $2.4 million last year alone – there must be some things wrong with it. However, for now the union’s position is the language is sacrosanct and cannot be significantly changed.

It is deeply ironic to watch the NDP – once the champion of the BCTF in its long court fight with government – now essentially taking a similar view as the BC Liberals held when it comes to that language - it is unworkable, out of date, and fails students and teachers.

And it is fairly clear that Finance Minister Carole James and Education Minister Rob Fleming are getting frustrated by a union known for its ability to frustrate and bewilder governments of all political stripes.

They may have thought that boosting education funding by a record amount, hiring more than 3,000 new teachers, ramping up seismic upgrade spending and building new schools may have improved their standing with the BCTF. Sorry, no dice.

The good news is the two sides are still at the negotiating table. Even better is BCTF president Glen Hansman’s recent statement that the union is prepared to negotiate during the summer, which is a break from previous rounds of bargaining.

But it neither side moves off their positions - which are poles apart on arguably the key issues at the table - then B.C.’s teachers will not be returning to the classroom in September. Instead, they will be on a picket line.