Five years ago, a giant statue of Satan with an erection enthralled Vancouver

Warning: This story may contain material and images that are offensive to some audiences. 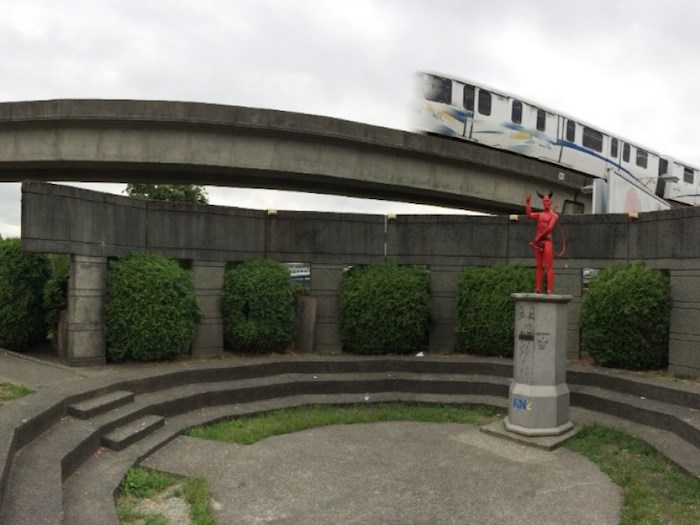 Five years ago today (Sept. 9), “Obsidian” stepped out of a vehicle near the East Van cross and into the annals of Vancouver lore.

Under the cover of darkness and as the midnight hour waned, he and three friends needed to act quickly: fasten a wooden platform, screw the supports down and apply some glue.

They needed to make sure Satan was secure.

Commuters woke up to the otherworldly one on Sept. 9, 2014, and what they saw was a hybrid of Anton LaVey and Ron Jeremy: a red, fibreglass statue of Satan, standing seven-feet-tall, brandishing the devil’s horns salute and sporting a hard-to-ignore erection.

City staff removed the statue within two days, but speculation continued as the story made international headlines.

Who built the statue? Why? And what happened to it?

That level of recognition is partly why “Obsidian” wouldn’t allow the Courier to use his real name in print.

In his first conversation with a reporter since those days of hellfire and brimstone, Obsidian recalls the intense scrutiny as rather off-putting.

“It blew up so fast, the next day it kind of shook me,” he said. “I went to work the next day and my buddy starts sending me all these messages and it freaked me out. I came home and I was too afraid to leave my bedroom.”

At the time, Hot Art Wet City arts collective founder Jeff Bentzen wanted to house the sculpture so it could be included in the group’s annual nude art show “Boobies & Wieners.”

Alas, Bentzen couldn’t find the rightful owner and the city wouldn’t relinquish the statue. So he settled for the next best thing and organized a life-drawing session complete with a costumed Penis Satan model.

“It’s the same kind of idea as the sculpture at Dude Chilling Park — somebody has randomly put something up and people embraced it,” Bentzen said. “Cities should do more of that. Vancouver definitely doesn’t do enough of that.” 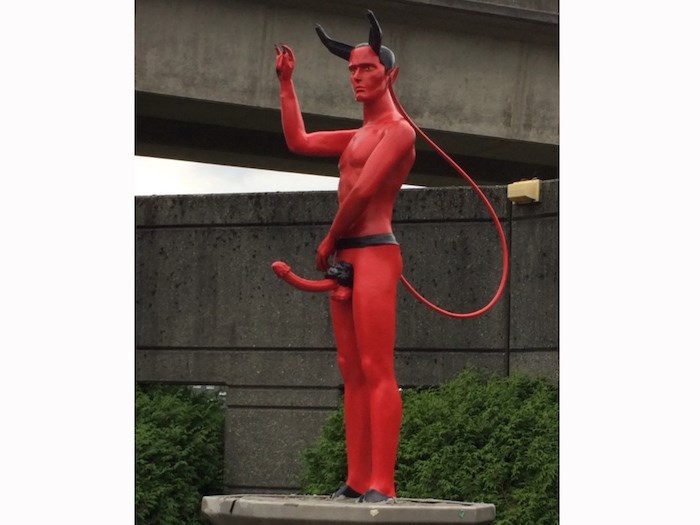 Vancouver Art Gallery (VAG) spokesperson Hanah Van Borek was contacted for this story, but knew little about Penis Satan’s whereabouts or the artist.

When asked if the gallery would have housed the statue, she said a marriage between Penis Satan and the VAG wouldn’t have worked.

“I sincerely doubt we would ever have this on view,” she told the Courier in an email.

Darryl Greer is a longtime contributor to the Courier’s sister paper Business in Vancouver and took up the Penis Satan cause in the week it made headlines. He started an online petition to have the city adopt the art piece, and his efforts garnered more than 2,600 signatures.

Greer was interviewed by regional, national and international media outlets and became Penis Satan’s de facto spokesperson in the absence of an owner.

“It started out as a joke among Facebook friends commenting on it and I said, ‘Someone should start a petition,’” Greer recalled. “It took 10 minutes to write the thing and it took on a life of its own. Within that week, it ballooned and went international.”

After city crews removed the statue, the city planned planned to hold on to it until its rightful owner turned up, but that didn’t happen.

Into the garbage Penis Satan went.

Eric Fredericksen is Vancouver’s head of public art. He wasn’t a city employee in 2014, but was asked how he’d respond to a similar quandary today — guerilla art that’s placed on city property that garners significant public interest by an artist who won’t claim ownership.

“If something appeared and it was clear that it had value and it had interest, I’d probably look to get it as legitimate as possible to protect it against all the confusion that erupts when you don’t know who owns something or why it’s in a certain place,” Fredericksen said.

The city had previously spent $62,000 on the Main Street poodle sculpture and $65,000 on an art installation near the Cambie Street Bridge that asks passersby, “Should I be worried?”

Not just for laughs

Which brings the story to today, Penis Satan’s five-year anniversary.

The Courier spent two weeks trying to find the artist, who somehow managed to keep his identity almost entirely separate from the dark lord for half a decade.

“I’ve just told people to keep quiet,” Obsidian said. “Some people know. People who I don’t know are like, ‘I know what you did.’ I just smile and say thanks.”

A source within the Vancouver arts community provided the Courier with Obsidian’s contact information. Obsidian then provided photos of Penis Satan being installed to verify his identity and the story began to fall into place from there.

Obsidian lives in Vancouver and works in the hospitality sector. He’s in his mid-30s, and while he has no formal arts training, he’s a longtime dabbler in the creative sector. 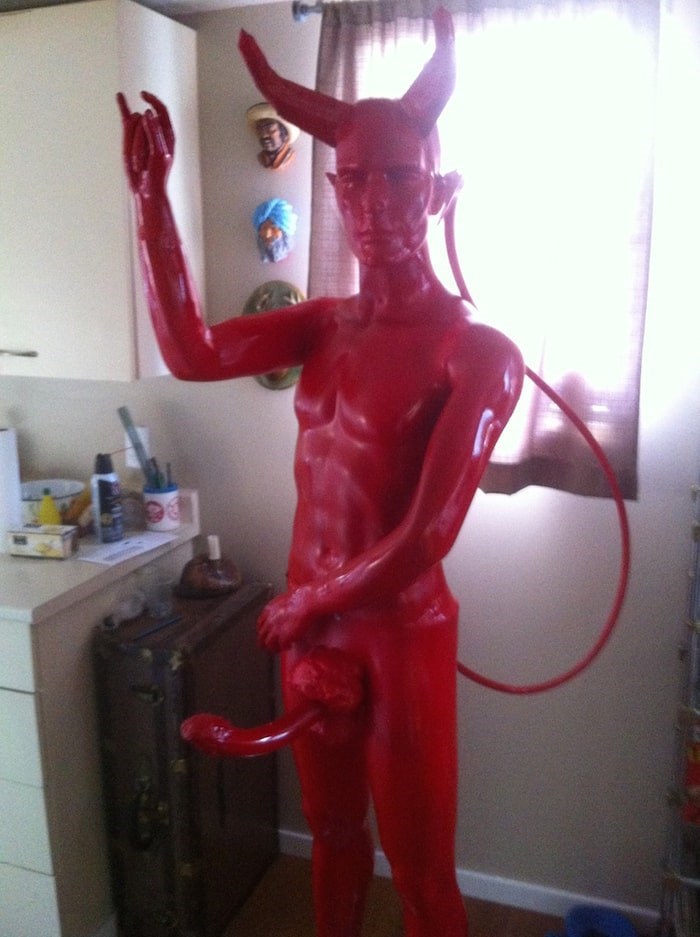 This photo was taken of Penis Satan in Obsidian’s kitchen during the process of creation. Photo submitted

Penis Satan was not the name Obsidian envisioned. Instead, he fancies “East Van Satan.”

“Everyone thought I was a Satanist,” he said. “That’s not it all. Not all things are so black and white.”

He spent three months building the statue, which was a mannequin with some additional parts from a hardware store. The plaza where Penis Satan was erected was once home to a statue of Christopher Columbus but remains largely vacant to this day.

Obsidian cased the plaza beforehand, measuring the platform and getting the specs right before the big night.

“I go by that location all time and I thought, ‘Man, this thing is just sitting empty and it seemed so weird and desolate,” Obsidian said. “I had to do something. One day, it popped in my mind and I was like, ‘Ah, that’s it.’

Obsidian enlisted the help of a few friends and waited for darkness to descend once it was go time. He sets the scene on Sept. 9, 2014 like this:

“We put it up around midnight. I had a friend who drove us there,” he recalled. “It took about 10 minutes, maybe a little bit longer. We almost dropped it as we were setting it up. The pedestal was much higher than we remembered.”

When Obsidian talks about his intention for the piece, it becomes clear this wasn’t solely a ham-fisted, half-baked exercise to get laughs alone.

Obsidian has an aversion to religion and politics. Despite the devil’s horns salute, Obsidian dislikes heavy metal. Instead, that two-finger gesture is meant to highlight his disdain for sex crimes committed by religious figureheads.

As for the phallus factor?

“That’s what’s waiting for all the corrupt politicians,” he responded.

More Satan statues across Vancouver followed after Penis Satan’s demise, and Obsidian was responsible for all of them.

He erected a white female Satan statue in mid-August 2015 atop the Gene Café at Kingsway and Main Street. That Satan was pregnant, though it wasn’t clear if that was a result of consummating a relationship with Obsidian’s previous work. Pregnant Satan remains in storage underneath the Gene Café to this day.

Shortly after that, another Satanic figure, this one with an even more exaggerated penis, appeared on the roof of the Red Gate Arts Society’s former studio on Hastings Street. Obsidian placed it there to protest the society’s eviction by Chip Wilson’s Low Tide property holdings firm. It was removed almost immediately.

It’s been four years since Vancouver’s last dance with the devil. Will Obsidian be heard from again?

“My plans aren’t certain,” he responded.