Here are the 10 best/worst public art pieces in Vancouver

In the last ten years, Vancouver has seen its public art expand and grow to an unprecedented scale. This is largely because of the City’s Public Art Program.
Duncan Anderson Dec 22, 2017 9:00 AM

In the last ten years, Vancouver has seen its public art expand and grow to an unprecedented scale. This is largely because of the City’s Public Art Program.

“In a lot of North American cities, there is a percent for art," says Eric Frederickson, the head of public art cultural services for the City of Vancouver. "Cities put a percentage of their capital budget towards public art. Sometimes Vancouver does this, but it’s not the key part of the law that the public art program looks to. The key part is that developers doing recent projects contribute money towards public art or manage public art themselves.”

Together, both developers and the City of Vancouver have made public art a contentious issue amongst Vancouverites. Love them or hate them, here's Vancouver's most divisive public art. 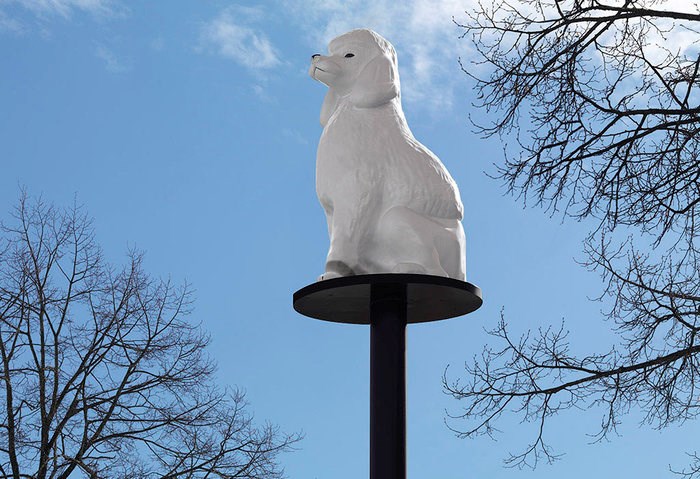 Now in its fifth year, Gisele Amantea’s untitled “poodle” installation confuses a lot of people. So, what does it mean? According to the Montreal artist, the poodle represents the character of Main Street. What with the variety of collectable and antique shops and no particular culture associated with the breed, the poodle can be appreciated, (or not), by a wide range of people. The poodle is part of an overall project that cost $97,600, covered by the city, federal government and TransLink. 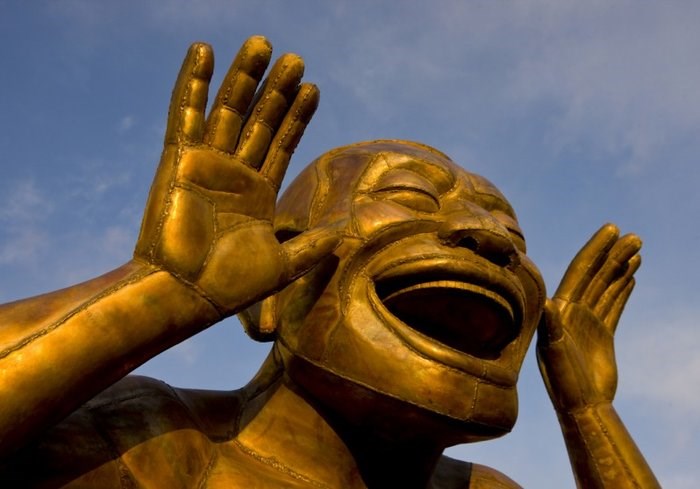 You either love it or are slightly afraid of it. In A-maze-ing Laughter Beijing-based artist Yue Minjun depicts his own iconic laughing image. The inscription near the sculptures states, “May this sculpture inspire laughter playfulness and joy in all who experience it.” How could you dislike that?

The Birds by Myfanwy MacLeod 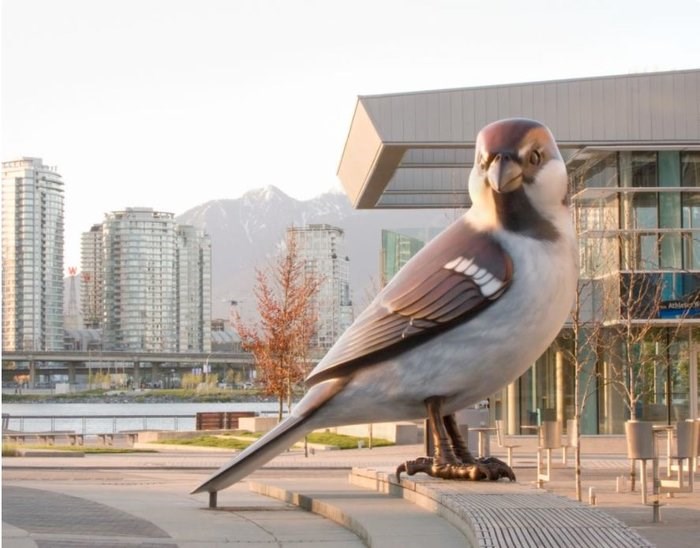 The Birds by Myfanwy MacLeod / City of Vancouver

The Olympic Village’s giant house sparrows were installed just after the 2010 Winter Olympics. They’re intended to remind passerby’s of the city’s sustainability, the site's history as a shipyard, Vancouver’s history of immigration and (of course), Alfred Hitchcock’s 1963 horror movie, “The Birds”. Perhaps more controversial than the actual artwork is the recent repair and maintenance bill that cost the city $425,000.

The Olympics are an interesting thing to point to; “it really got the program into more prominence,” Frederickson said. “There were significant resources put into these projects. That’s how we funded the Monument for East Vancouver as well as Rodney Graham's installation near Stanley Park, Ron Terada’s at the library, and The Birds in Olympic Village.” 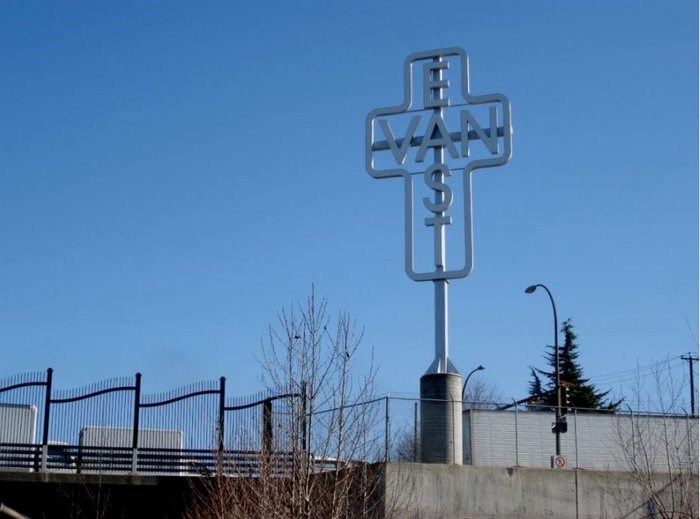 It probably makes Skytrain commuters and other observers think, "What is it like to live in East Van?" Or maybe the cylindrical graffiti base makes them grimace. Ken Lum’s Monument to East Vancouver, aka the East Van cross, spawned out of the Olympic and Paralympic Public Art Program. The seventeen-and-a-half-metre sign is fabricated out of steel and light-emitting diodes that automatically turn on at dusk and off at dawn. Lum was born in East Vancouver in 1956 and his work speaks to the “social, economic and political divides that exist in Vancouver.” 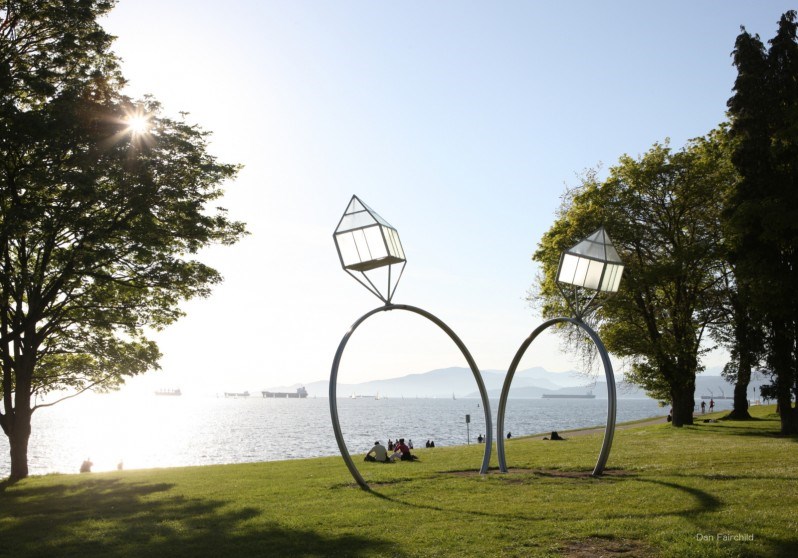 Dennis Oppenheim’s Engagement at Sunset Beach Park is a remark on the delicate balances in marriage - “that of the romantic, traditional, economic and the illusions inherent in the institutions, the meaning of Engagement is intentionally open-ended.” Other versions of the sculpture have been installed at the Nevada Museum of Art in Reno, Nevada, San Diego, California, Ruoholahti, Finland, and Austria. Oppenheim died in 2011.

Trans Am Totem by Marcus Bowcott 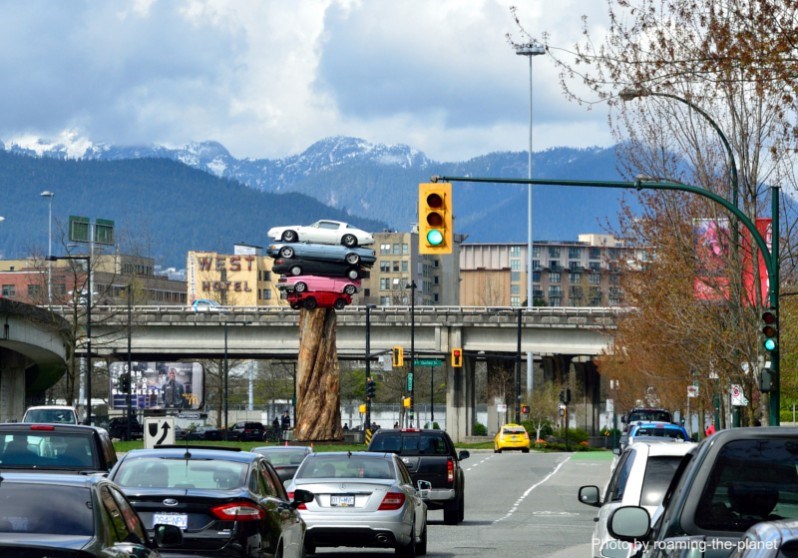 Arranging what remains of our “throw-away consumer culture”, Vancouver artist, Marcus Bowcott, makes it clear what the metaphor is here with his 33-foot sculpture. Trans Am Totem “uncovers an unpleasant darkness in our society, revealing the emotional bankruptcy that results from our dependence on cheap consumer goods which are almost always produced by unseen people on other continents.” Bowcott’s work is a reminder of our contribution to global warming and how our actions impact the environment around us.

Should I Be Worried by Justin Langlois 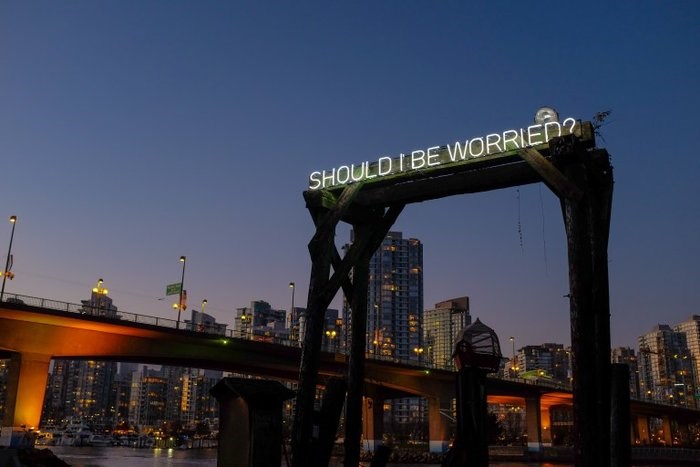 Justin Langlois’ Should I Be Worried?, which is a neon sign on a wooden structure, framing condos along Vancouver’s False Creek, came about through a residency that he did with a sustainability group at the city. Should we be worried? Probably. If you live in Vancouver or are trying to find a place to live in Vancouver, then this is a timely, relevant question. According to Langlois, the sign “captures a lot of the tension points, as well as being really close to the water and connecting to sea level and those kinds of challenges that we’ll have to face over the coming decades.” The cost of the artwork was part of the $115,000 budget allocated to the Artist-in-Residence program by the City of Vancouver. 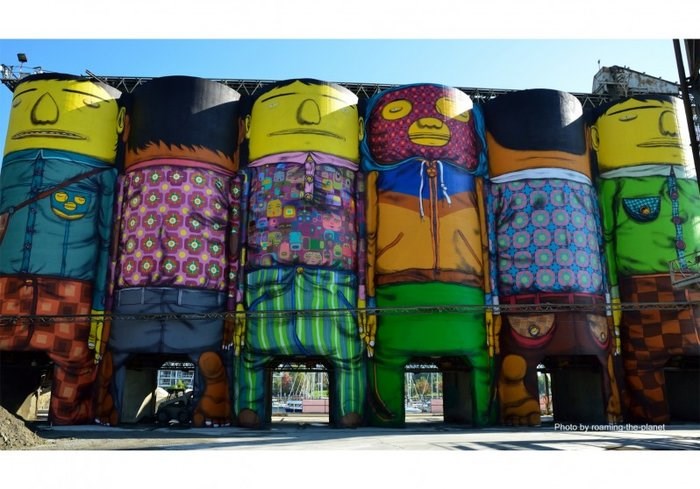 Giants by OSGEMEOS by Gustavo and Otávio Pandolfo / Vancouver Biennale

Giants is a 21.3-metre tall mural on Granville Island. It’s part of the artist's’ ongoing project, which includes similar murals in Greece, USA, Poland, Portugal, the Netherlands, Brazil and England and is their largest public artwork ever. According to the artists, Giants is meant to “bring new characters to Vancouver while sharing perspectives and cultures and establishing a relationship between the people who frequent this site and integrate this work into the city scenery.” 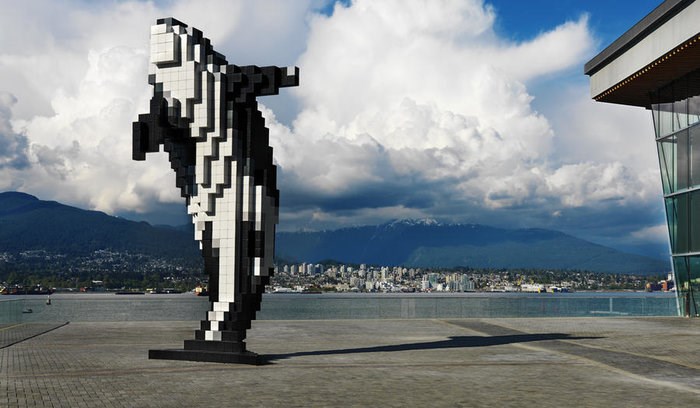 Did anyone else do a double take when they first saw Douglas Coupland’s Digital Orca? The Vancouver Convention Centre's pixelated whale is meant to address the massive changes that have reshaped B.C.’s economy. Some consider it on a critique of how we experience the natural world in the modern age, whatever the case; the contentious sculpture certainly turns the heads of both tourists and locals alike. 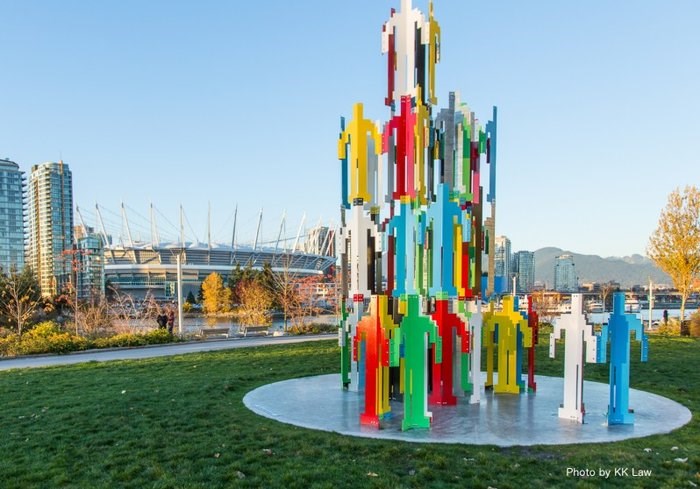 These colourful interconnected figures are meant to convey a sense of “universal connectivity”. The steel sculpture is intended to appear as pixels, which come together to comment on the structural connections in the digital age.