Heading into its fifth year, the Squamish Beer Festival has grown to the point where it now has to turn away breweries interested in taking part.

According to organizer Scott McQuade, it's Squamish's cache as a beer destination unto itself rather than a stopover on the way to Vancouver or Whistler that has led to its burgeoning popularity with B.C. craft brewers. 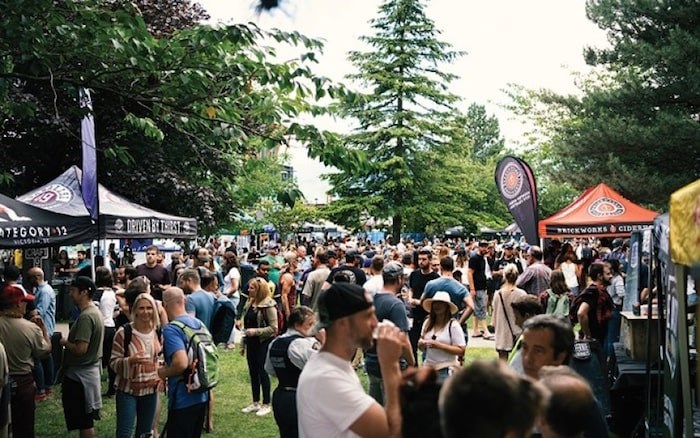 "[Brewers] just want to be associated with Squamish," McQuade said. "It's just out of town for the Vancouver people. They want to capture that outdoor rec market, maybe. I used to have the liquor store in town for quite a long time and Squamish people really know their beer. They really do. I think that's a big part of it, too: they want to get in front of a crowd that knows beer."

This year's festival will feature 55 breweries pouring more than 200 different beers and ciders. But there's more than just good brews on tap: the event includes more space for food trucks than ever before, featuring eight different vendors dishing out everything from tacos to souvlaki and gourmet hot dogs to crepes.

Along with axe throwing and a range of fun lawn games, the bill is packed with music and live entertainment, including Vancouver funk and soul DJ Hebegebe, and the one-of-a-kind live show from East Vancouver's The Carnival Band, who originally caught McQuade's eye several years ago at the since shuttered Squamish Music Festival.

"(They are) this really cool band that is probably a 20-piece band and they don't play on the stage," he recalled. "They'd be playing and have people follow them like a carnival. It was so much fun. I had so much fun that I actually skipped one of the first sets of a band that I went there to see just to follow these guys around."

After half a decade, McQuade said the event team has ironed out the details and figured out what it takes to put on a mid-scale beer festival.

"We get better and better every year. It's the little things, like making sure ticketing goes smoothly, that the sound is great, that we have the right kind of entertainment, the best timing—things like that. We just try to get a little bit better every year," he said, adding that partnering with JP Tondreau, who has produced a variety of events, including for Cirque de Soleil, and former Howe Sound Brewing general manager Trevor Magee has been a godsend.

"It has made all the difference. We've partnered with two great guys who have seen a lot of events before. Even in our first year, we had a lot of brewers come and comment to us that, 'Wow, this is running like an event that has been out for a few years,' and that's a testament to JP and (Magee)."

Between the Whistler Village Beer Festival and the plethora of beer-themed events in the Lower Mainland, there is no shortage of ways to drink the summer away. As such, McQuade doesn't feel the need to reinvent the wheel with Squamish's beer festival.

"I don't think it is really set apart from the Whistler festival. I don't really want to take anything away from them; I think those guys do a fantastic job up there," he said. "But I think if you want to come and enjoy some beer and hang out with your Squamish friends, then what a great opportunity to do it."