STORIES FROM THE SIDEWALK: The Man Who Chose Poverty

The founders of the SIDEWALK supper project share their stories as they connect with people living on the streets. This week, meet a man who turned his back to his wealthy family and find out why he has no regrets.
Eddy Tan May 3, 2016 5:15 PM

The founders of the SIDEWALK supper project share their stories as they connect with people living on the streets. This week, meet a man who turned his back to his wealthy family and find out why he has no regrets. 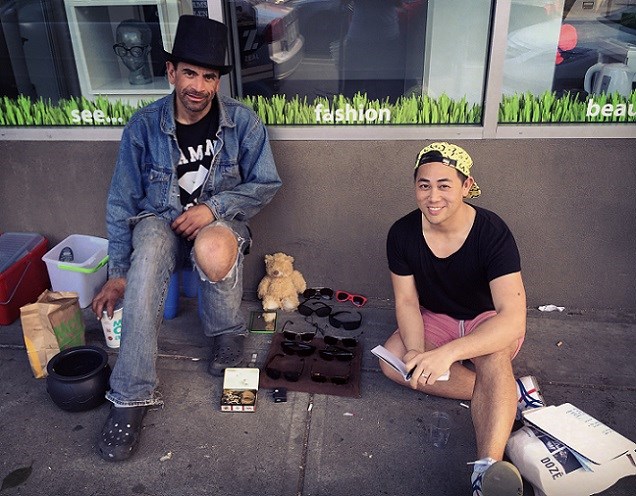 Tony (left) & Eddy (right) having a chat on the sidewalk.

Family is a complicated force in everyone’s life. Our upbringing gives us a model to aspire to or fight against. It shapes who we are, whether we want it to or not.

Tony lives on the streets and can fit all of his belongings in a shopping cart that he keeps by his side. This isn’t the life that’s been dealt to him—this is the life he’s chosen. He comes from a world of opportunity with a family and support network behind him. Despite this, he now calls the pavement his home.

As my partner Andrea and I walk past Tony, we sense that he has a story to tell. Tony stands out in a crowd. For starters, he’s wearing a top hat. A selection of sunglasses of questionable origin are neatly displayed on a towel beside him, presumably for sale. We ask him if he’s hungry and if he’d be willing to chat with us in exchange for some food. He agrees. His meal of choice? A McDouble with fries and root beer. Conveniently, we’re standing right outside McDonald’s.

After ordering his meal, we introduce ourselves and pull up a seat on the sidewalk. Here is Tony’s story.

EDDY: Can you tell us a little about how you ended up on the streets?

TONY: Well, I grew up in Whistler. I was working in construction, building log houses up until the Olympics. In my 20s, I became an alcoholic and got addicted to cocaine. It got so bad that my family helped put me in rehab on the Sunshine Coast. I never thought I'd see the day when I don't get thirsty when I see a drink, but now I don’t do that stuff anymore.

My family is really narrow-minded. They have money, but they’re snobs. I don’t want to live like they do. I went and traveled the world. I’ve been to Europe, Hawaii, Japan… I refuse to go back to living my life the way they do. That’s part of the reason why I’m on the streets now. I’d rather be here than living like them.

I started to realize this when my family picked me up from rehab. They had beer in the car. Beer! I couldn’t believe how careless they were. They didn’t even think about how I could relapse.

Over Christmas that same year, I was accused of stealing money from their house. It wasn’t me. I swear it was my mom’s friend and I told them that, but they still believed it was me. That really hurt.

EDDY: How did you get mixed up with cocaine?

TONY: It happened in Colorado. I was in Aspen building a log house for this rich family. Coke is everywhere there. I did it for the first time and got hooked.

EDDY: What is an ordinary day like for you on the streets?

TONY: It’s not so bad. In the day, I busk. I’m a musician. I play the harmonica, the piano, the guitar… I like the blues. I don’t just do it for the money—I do it for fun.

At night, I go binning. It’s amazing the things that people throw out. I once found a pair of True Religion jeans with the tags still on! I also find food. There’s so much to find in Vancouver.

EDDY: What’s the hardest part about living on the streets?

TONY: I have size 13 feet. It’s hard to find shoes that fit me. I walk a lot. I’m constantly on my feet walking around. It hurts.

(I look down at his feet. He’s wearing a pair of worn-down grey Crocs, but at least they look like they fit.)

EDDY: What’s next for you?

TONY: (Laughs) I met this Chinese man who loves to sing. The thing is, he has a terrible voice! Anyway, he has this mission to walk around the entire world. He wants to do it just out of love. I don’t know if I’d be able to make it the entire way, but I think I might join him and see how far I can go.

EDDY: Will you ever make peace with your family?

TONY: I love my family. I love my mom and my brother. But I don’t want to live the way they want me to. They came looking for me a few months ago. I was living in a shelter during the winter and they were able to track me down. They came in asking for me. I snuck out the back door.

Throughout our conversation, I try to dig a bit deeper to understand the underlying resentment towards his family and motivations behind choosing a life on the streets. I sense that there’s much that’s not being said and only so much he’s going to reveal. He speaks with sincerity though and radiates this bohemian energy that most hipsters would pay good money for. I believe every word when he says that he chooses this life over the life that his family could have given him.

For Tony, his family represents a life he doesn’t want and the person he doesn’t want to be. With so many people in this world desperate to fulfill their parents’ expectations or be more successful than their siblings, I find Tony’s outlook admirably liberating.

My last question for him is whether or not he has any regrets.

“I don’t regret my life,” he says, thoughtfully. “For me, traveling is the best education. Nobody’s perfect and my life isn’t perfect, but I have no regrets.”