It's been over 3 years since I moved my little family into Vancouver's Olympic Village. For the first year I worked with Rennie to share the experience of what it was like to live in this neighbourhood which was on the cusp of transitioning from being a virtual ghost town after the Games (see the In The Village series HERE). In that time I got to know the folks at PWL Partnership, the award-winning landscape architecture firm who designed almost all of the public space there. A former industrial site, the area was transformed to include wetlands, a bioswale, as well as an entire island built to replace some of the shoreline that disappeared when they filled it in. I essentially became an expert on the subject of the Village and there are still things that go relatively unnoticed which I try to share with people, like these Saskatoon berries (pictured below) that are literally ON the seawall but which nobody aside from me seems to pick and eat. Tens of thousands of people walk by them but the thought of foraging in an urban environment is so foreign that I imagine most think they're just some sort of decorative berry. They'll be ripe in a few weeks (when they turn purple) and I'll go down with a bucket and pick as many as I can to put in the freezer for smoothies, but still SO many of them will go to waste. Get down there and pick some! Also, look a little harder and you'll find a crapload of blueberries as well. And of course, like any Vancouver neighbourhood, there are blackberries creeping in on the periphery, so watch out for those - they may not have been a part of the design like the first two varities, but they're definitely there. 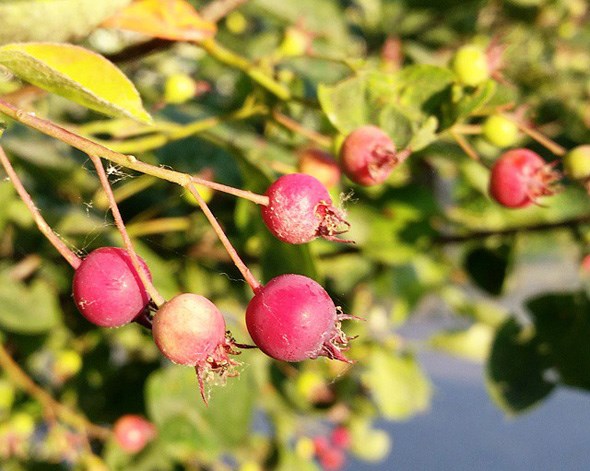