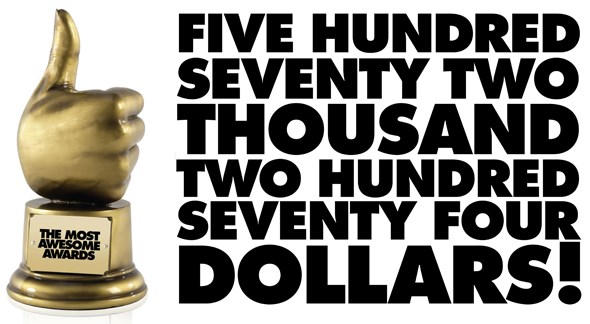 $572,274.00. That's the (staggering) amount of money raised for British Columbia food banks by CBC and their listeners in our province last week. Their bureaus in Victoria, Kelowna, Kamloops, Prince Rupert and Prince George all held open houses and as I WROTE on Friday the Vancouver Broadcast Centre also hosted a super fun day that people from all around our region were invited to take part in. The Early Edition, BC Almanac and On The Coast all did live-in-front-of-a-studio-audience versions of their Radio One shows complete with musical guests, local celebrities as well as all of the awesomeness that they're usually known for.

As Canada's public broadcaster, CBC uses our tax dollars to create programming and keep us informed of everything important happening in our country, our province, and our city. Into all of their work is woven some sort of magic that makes us feel... well... more Canadian, connected to the people and that intangible something that makes us feel a sense of national (and civic) pride. So on one hand their Most Awesome Award is for all of the work they do in serving us "customers" of theirs (who are also kinda their bosses) by providing us this programming and inviting us into their space, but the most awesome customer service move is to their customers who use the food bank. CBC has been doing this open house for 28 years now and they've raised millions of dollars for families in need, and as our city continues to become less and less affordable I can't think of a more awesome thing they could do to serve the community. They used the power of their reach and their voice to raise more than half a million dollars this year. That's really awesome.