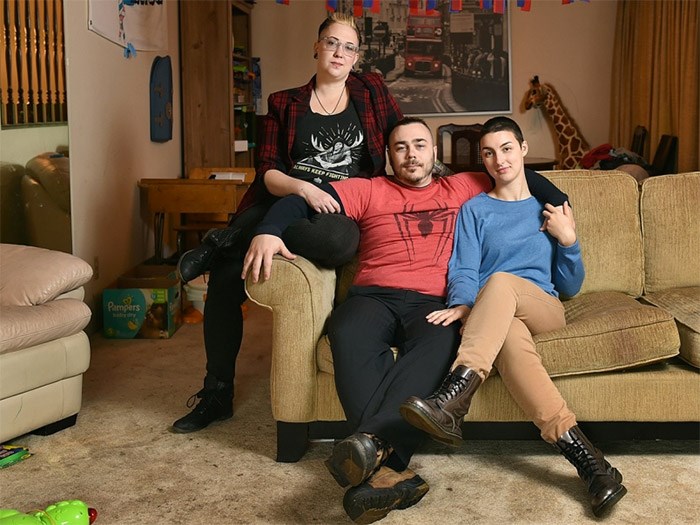 One plus one doesn’t necessarily equal two in the Beatch household.

Robin and Brandon Beatch have been married for four years and have two kids under the age of five. They co-parent and have little in the way of a sexual relationship. Instead, Brandon has a girlfriend and refers to himself as a “relationship anarchist” (more on that later).

Robin, meanwhile, identifies as queer and is recently single.

Welcome to the world of polyamory.

Many definitions exists under the umbrella of polyamory, and those who spoke to the Courier had a slight variation on what the term means and how it applies to them.

Stan K (who asked his last name to be withheld) serves as an administrator of the Vanpoly Facebook group, which boasts close to 2,000 members. A member of the poly community since the early 2000s, his definition is this:

“Polyamory is more than one lover or intimate relationship with the full knowledge and consent of everyone involved,” he said. “Some call it simply ethical non-monogamy.”

Polyamory recently received the big screen treatment with the release of the Hollywood film Professor Marston and the Wonder Women. The film centres around the polyamorous relationship between psychologist William Moulton Marston, his wife and his mistress. Marston is credited with creating the comic book character that went on to become Wonder Woman.

Members of Vancouver’s poly community were invited to an advance screening in early October, and, by extension, invited to offer snapshots of their lives with the Courier.

Brandon and Stan both opted for the poly side of life in the early 2000s. For Stan, it was a film about open relationships that led him and his wife to open up their marriage.

“For me it wasn’t so much a change,” Brandon added. “I have always been the type of person to assume that the normal way of doing things isn’t always the way that we should do them.”

“It was refreshing. I heard the term and I thought, ‘Oh, this actually kind of makes sense to me,’” she said.

Like Brandon, polyamory relationship coach Mel Cassidy counts herself in the anarchist camp. That term means that friends, lovers and acquaintances are all looked at the same, with the same amount of love and attention.

Many of the same skills and emotions needed for monogamy carry over into the polyamory world as well.

Attention, as it turns out, is critical to making the poly boat float.

“Shadow emotions — like jealousy, fear, envy and anger — are all clues to something else going on inside of ourselves,” Cassidy said. “It’s really good practice to get used to identifying those things and then sitting down with your partner and then communicating them.”

A Vancouver ex-pat who recently relocated to Vancouver Island, Cassidy has been in the poly coaching field for close to three years. Her clients are from all corners of the globe and typically in their 30s and 40s. Sexual fantasies, impulses and, in some cases, cheating become the catalyst for change.

Cassidy examines three core principles when clients come to her: what kind of non-monogamy they want to explore, why those people are choosing polyamory and what those clients envision five or 10 years down the road.

“One of the most complex sessions I’ve ever had,” she said.

Speaking of complexity, there’s the whole “Hey, Mom, guess what? I’m polyamorous now” discussion. Brandon says his parents were cool with it, as long as he was happy and the kids were too. Robin’s mom was not happy at first, but has accepted it.

“My mother had a very negative reaction to it to the point that she couldn’t stand to live in the same country as me,” she said. “On the other side of the equation, my dad is OK with it.”

While they’re no longer sexually active with one another, Brandon and Robin say they’re committed to staying together in order to raise their kids. Robin has no problems explaining the situation to her four-year-old son, but she wonders how others will perceive their lifestyle.

“I can’t control that. But I worry about parents perhaps not wanting their kids to have sleepovers at our house because they think we’re sexual deviants or something like that,” she said. “The approach to that is that we’ll have to teach our kids that not everyone lives the same way and some people don’t understand.”

Everyone who spoke to the Courier said that level of understanding is changing. The last five years in particular have seen real conversation starters.

Living on “the Left Coast” only adds to the degree of acceptance, those in the community say.

“It has changed dramatically over the last decade,” Stan said. “Polyamory has gone from something hidden from view to something now commonly known.”