Local illustrator Geoff Coates spoke to V.I.A. about the concept behind an image he created to depict the Vancouver 'wet-cold' sentiment. 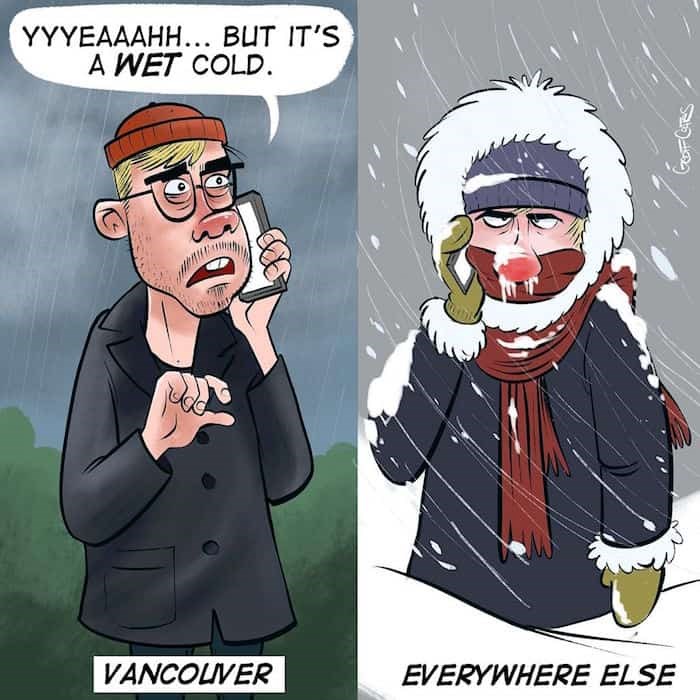 Does it really get that cold in Vancouver in the winter?

The answer depends on whom you ask. For some, the seemingly unending stretches of chilly, damp weather feel rather frigid. Others, however, find the idea that Vancouver is cold laughable.

Local video game art director and illustrator Geoff Coates spoke to Vancouver Is Awesome about the concept behind an image he created to depict the infamous Vancouver 'wet-cold' sentiment.

The first image shows a man in Vancouver donning light winter attire saying, "Yyyeaaahh...but it's a wet cold" with a light rain behind him and some green trees. In the following image, a person who is "everywhere else" is standing in feet of snow and completely bundled up with a bright red nose. The person also appears extremely cold and agitated.

After Coates's image was posted on Reddit Vancouver, it created an intense discussion about temperatures across the country, as well as what constitutes truly frigid weather.

"The main reason was just that, as a lifelong Vancouverite, it's something I hear locals (myself definitely included) say every winter, usually as a way to justify how freezing we are, even though we're typically not even dipping below zero for most of the winter," he explained in an email.

"And since Vancouver also consists of a lot of people from other (colder) provinces, there's a lot of eye rolling from the prairie folk who endure -20 for months on end."

Coates describes how he was was sitting with a group of lifelong west coast people discussing how the cold in the Lower Mainland "goes right through you." This made him think of what someone dealing with an actual deep freeze might think of that statement.

You can view more of Coates' work on Instagram here.