ReVIEWS, preVIEWS, interVIEWS, and overVIEWS: here's where you'll find out what the Vancouver Book Club team thinks about the literary scene in Vancouver. What you should read, where you should go, who you should sit up and notice.
0
Feb 12, 2012 9:00 AM By: Liam Ford

It's easy to be a cynic. So you'd think after penning six books and chasing down thousands of news stories through nearly four decades in the business, life might be starting to lose its lustre for Mike McCardell.

The Vancouver icon and Global BC human-interest reporter shows in his latest collection of stories — Here's Mike & Junkyard Granny, Whistling Bernie Smith, The Robertson Screwdriver, Pancakes & Eternal Truth (Harbour Publishing) — that he still has two twinkling eyes focused on the bright side of life. 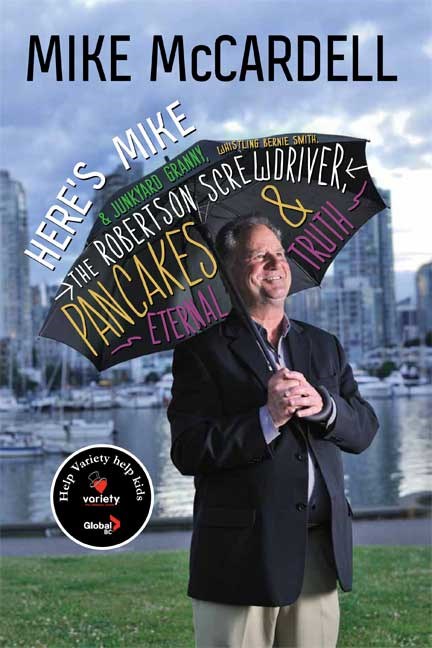 Sure, there's lots of bad news in Here's Mike. He transports us through his well-crafted, simply worded stories to the gas chambers of Dachau, to the day JFK was assassinated, to the hours after last year's Stanley Cup riot.

But McCardell, who cut his teeth as a crime reporter in New York, doesn't dwell on the negative. In this collection of five dozen stories, as he says in "Stop The Presses", the tale of a blue balloon that dodges the traffic of Georgia Street before being rescued by a Korean exchange student, "Good wins."

McCardell peppers his positive tales with interesting tidbits we might not otherwise know about our beautiful city (which he moved his young family to after reading about it in National Geographic). Who knew that Gassy Jack owned an establishment in New Westminster before he moved to Vancouver? That a Canadian arm of the Ku Klux Klan met in what is now Canuck Place? That the route to build the freeway into downtown was chosen to demolish the black community that lived along Prior Street?

Beyond the history, it's McCardell's way with words that appeals — quite a feat for someone who says he can't actually read. In stories like "Rita and Ida", about two widows McCardell met 10 years ago as they sat at Kitsilano Beach watching boats pass, and "High Points of My Life", a recollection of his alcoholic father and uncle who became a crooked cop, he evokes tenderness, heart-ache and understanding like few authors can. "Chasing a Bus", which describes a man's determination to catch a bus against unlikely odds, exemplifies McCardell's mastery of story structure in an exhilarating sprint of a tale.

The behind-the-scenes, off-the-air glimpses of McCardell make the read even more worthwhile. There's a hint of the hard-edged reporter who shows disdain for pretentious colleagues, political correctness and politicians, and says "Don't ever believe the official version of anything." There's a twist of moral ambiguity in stories like "Laughing Hand", in which McCardell, his wife and young kids are special guests at a country music show at the Penthouse strip club. And there's an undying optimism, which McCardell says he learned from a nine-year-old boy with autism named Reilly, who taught him that "You get what you want."

A man who practises what he preaches, McCardell will donate partial proceeds from each copy of Here's Mike sold before February 29 to Variety — The Children's Charity. His six previous books have raised over $75,000.