ReVIEWS, preVIEWS, interVIEWS, and overVIEWS: here's where you'll find out what the Vancouver Book Club team thinks about the literary scene in Vancouver. What you should read, where you should go, who you should sit up and notice.
0
Mar 25, 2012 9:05 AM By: Liisa Hannus

April 10, 1912.  The RMS Titanic leaves Southampton, England on her maiden voyage. Five days later she infamously creates her place in the history books and over the next 100 years provides inspiration for dozens of films, songs, and books.

Vancouver poet Billeh Nickerson was born in Halifax, where the recovered bodies were brought and where 150 of those, unidentified and unclaimed, are buried. His latest book, Impact: The Titanic Poems (Arsenal Pulp Press), is an historical and sensitive look at the ship, the people lost and found, and the event itself.

Nickerson gently leads us through the chronology of the Titanic, from its construction to the death of the last survivor. Thanks to the extensive research he conducted in Halifax and Belfast, Ireland, where the ship was constructed, he takes us into the thoughts of the people whose lives were touched by the Titanic: an Irish woman with a framed view of the ship every time she unpins her husband's shirt from a clothesline; a child more fascinated by his spinning top than by the marvel of the ship that the top spins on; the crew on the Carpathia, first to reach the debris-littered spot where once had been the mighty ship; the family of a lost band member, startled when they receive a invoice for the balance owing on his uniform. 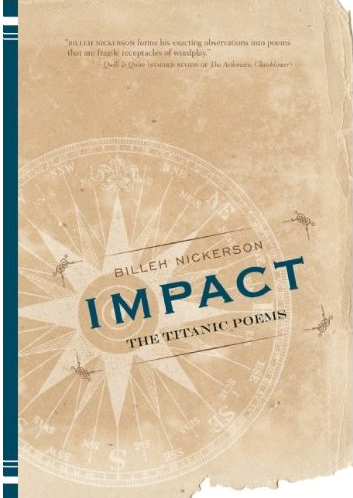 The poems are presented in six sections, from Construction to Discovery. Two sections are entitled "Impact," with the first being physical and the second one emotional. Perhaps the strongest section is the fourth one, "Voices." Here Nickerson takes us into the thoughts and emotions of five actual survivors, creating "found poems" from the quotes or writings of the people, discovered during his reading and research. Whether in the first or third person, the words resonate with the authority of someone who was there.

The beauty of Impact: The Titanic Poems is in both its narration and its accessibility of language. Nickerson packs a lot of story into these spare poems. This is not "The Wreck of the Edmund Fitzgerald," and Nickerson does not present us with one monotonous verse after another. Instead, he varies his structure depending on the story. "The Boy in Lifeboat No. 14" is a detailed account of the cruel fate of being on the cusp of manhood, while "Somone's Lucky Penny" consists of eleven words drifting down through six lines and two hours until reaching the sea floor.

A lot of people shy away from reading poetry because in many cases it's akin to reading something in French when your only exposure to the language has been watching hockey games on CBUFT. This is not the case here. Billeh Nickerson doesn't make the reader work to get to the meaning of his words but rather allows us to focus on the story being told. He gives us details, but not the ones that history has deemed important. He allows us to simply absorb the words to better understand all the emotions of the Titanic story.

Arsenal Pulp Press is presenting the launch of Impact: The Titanic Poems on Tuesday March 27, at the UBC Bookstore at Robson Square. Doors open at 6:30, reading at 7:00.