Cancelled due to COVID-19, the colourful train won’t be making its usual stops this year, but you can catch the entertainment from your couch and make a donation online.
Nov 21, 2020 11:09 AM By: Diane Strandberg 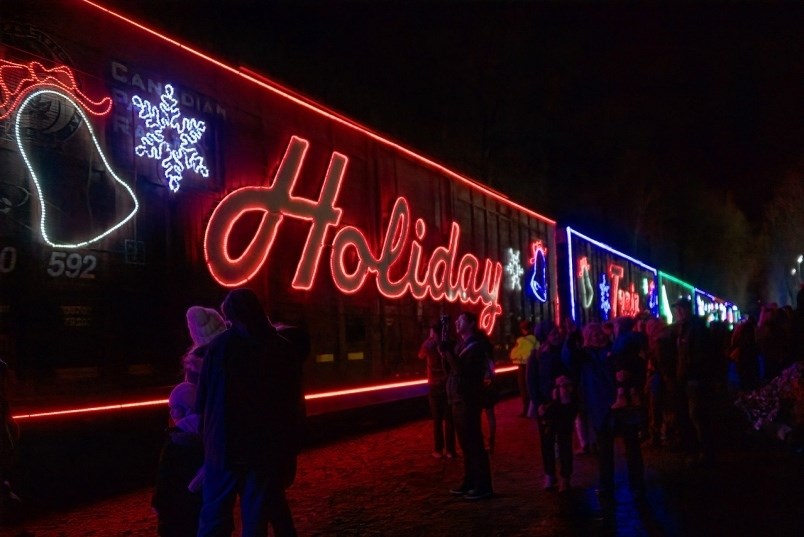 The colourfully-lit CP Rail Holiday Train won’t be rolling through Vancouver this year due to COVID-19, but you can watch the entertainment online and dig deep to support local food banks. FILE PHOTO

This year, the annual CP Rail Holiday Train will be rolling through Metro Vancouver virtually.

The brightly-lit CP Holiday Train usually stops by over 140 communities across North America—four of which are located in the Lower Mainland—to collect food and funds for local food banks along CP's routes in Canada and the United States.

But due to the ongoing COVID-19 pandemic, the annual tradition that's raised $19.05 million and 4.8 million pounds of food donations for food banks since the event's inception in 1999 has been cancelled this year.

That might mean no gathering around a colourful train to listen to music, sip cocoa and sing holiday tunes, but it's not all doom-and-gloom: Instead, it's being replaced by a virtual concert.

Serena Ryder and The Trews will headline CP's 2020 "Holiday Train at Home" concert, which will stream on CP's Facebook page on Dec. 12. The event will raise money and awareness and help local food banks collect much-needed donations.

CP Holiday Train fans will be able to view the concert by visiting facebook.com/canadian.pacific at the show's start time. An archived version of the show will remain on the page for later viewing.

Large crowds typically congregate at stops in Maple Ridge, Pitt Meadows, Port Moody and Port Coquitlam to see the colourfully-lit train and enjoy free entertainment, but this year the tracks will be empty as CP is following COVID-19 safety protocols and avoiding crowds.

CASH TO BE DONATED

In an announcement online, CP stated that it would still be donating $1.24 million this year to 201 food banks in communities that ordinarily host CP Holiday Train events.

"For more than two decades, the CP family has supported Canadians and Americans in need through the CP Holiday Train program," said CP president and CEO Keith Creel. "In a year full of challenge and loss, we will host this concert as a call to action for the train's supporters to donate generously if they can this Christmas season. The spirit of the Holiday Train will come alive even though the train itself will not operate due to the COVID-19 pandemic."

In the Metro Vancouver area, Share Family Community Services is also accepting food and toys, including cash donations online, for its holiday program. More information about how to give is available at www.sharesociety.ca

- With a file from Megan Lalonde