Enjoy a FREE symphony in the park this summer in Burnaby

The Vancouver Symphony Orchestra is returning to Deer Lake Park this summer for its popular free outdoor concert.
May 31, 2019 1:35 PM By: Burnaby Now

The Vancouver Symphony Orchestra is returning to Deer Lake Park this summer for its popular free outdoor concert.

The 32nd annual edition of Symphony in the Park is on Sunday, June 30. 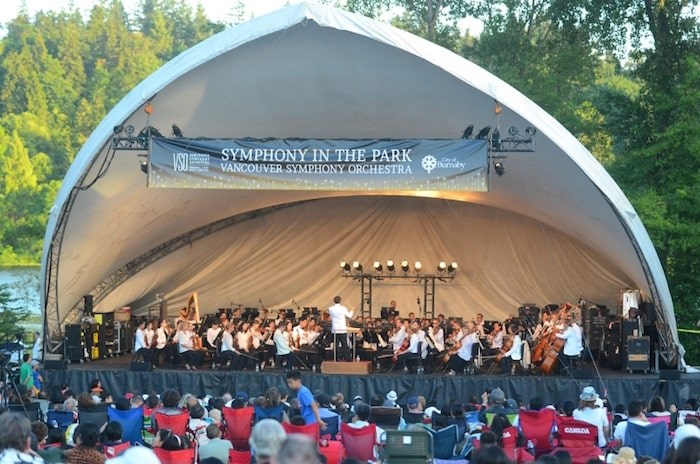 “I am delighted to conduct the program at Deer Lake Park this summer,” said VSO conductor Otto Tausk in a press release. “This concert tradition is something the VSO looks forward to each year, and any opportunity to connect the symphony with the community is one that we are thrilled to embrace. Our concert this year features some fantastic pieces that we look forward to performing for the community.”

Attendees will be able to hear such popular classics as selections from Leonard Bernstein’s West Side Story, Ravel’s Bolero, the overture to Tchaikovsky’s Romeo and Juliet, Mussorgsky’s Night on Bald Mountain, the prelude to Act III of Wagner’s Lohengrin, and themes from John Williams’ E.T.

Symphony in the Park will also feature a solo performance from an up-and-coming young musician, to be chosen during the VSO Orchestral Institute’s concerto competition in late June.

New to the concert this year is an opening performance from the VSO Orchestral Institute, which includes students from the orchestral training program.

Everyone is invited to turn out with blankets – and picnic dinner – to take in the concert.

The prelude performance begins at 6 p.m., with the feature concert at 7 p.m. Admission is free.

One note: Parking is limited around the site, so it’s recommended that you get there on foot, by bicycle or by transit wherever possible.

Symphony in the Park