Inside was Jon Snow's characteristic cloak from the Game of Thrones set, and Squamish-based artist Sarah Symes had four weeks to transform the costume.
Apr 13, 2019 2:30 AM By: The Squamish Chief 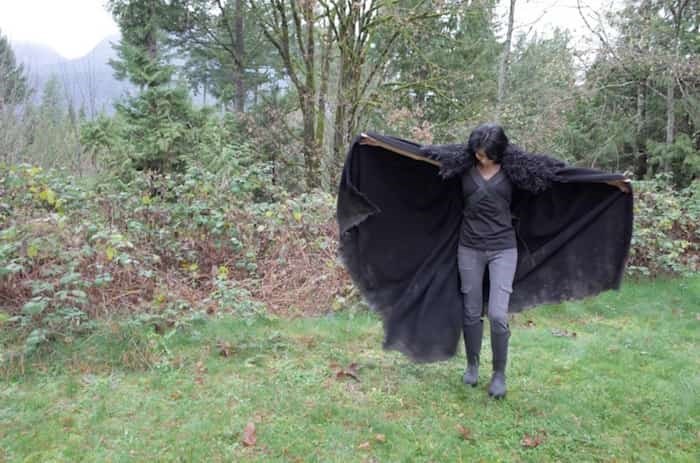 The large black box arrived on her doorstep like a mysterious invitation.

Inside was Jon Snow's characteristic cloak from the Game of Thrones set, and Squamish-based artist Sarah Symes had four weeks to transform the costume into a new work of art.

"When I opened the box, the cloak felt like it had arrived from Castle Black. That's when it hit me. It was heavy and it was stained with makeup and mud and sweat, just exactly what you'd expect. They were calling it a replica, but I'm not so sure," she said. "It came from Belfast, which is where the set is, so I'm pretty sure it was the real thing."

In October, Symes got an email out of the blue, telling her she was one of 18 artists chosen for a campaign: To ‘Create for the Throne' using props from HBO's Game of Thrones. The creative director, she was told, had scoured the internet and found her work.

"I've done a few big commissions, but who am I kidding — this is a whole new level," Symes said of the project. "Of course, I cleared my schedule." 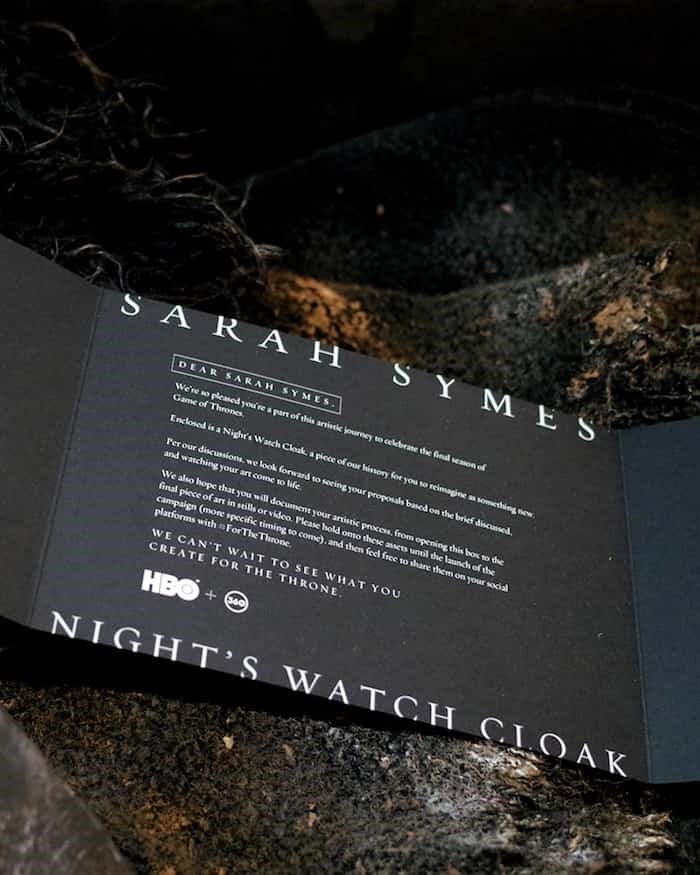 Like millions of fans, Symes has explored the fantastical world of HBO's Game of Thrones. She's watched every episode — then again for research — and read some of the lengthy novels the series is based on.

"I wanted to create a piece of work that was true to what I do, but also was inspired by the cloak. But the cloak was not enough for me," Symes said. "I wanted to try and capture the story of all of the men of the Night's Watch and make it bigger than that to make the piece truly compelling."

For those not in the know, the Night's Watch is a militia of men who have pledged their life to guard the Wall, a cold, barren and forbidding environment on the edge of known civilization. All members wear a heavy black cloak to save them from the cold, as they do their part to save the Seven Kingdoms.

Naturally, Symes had to try it on. 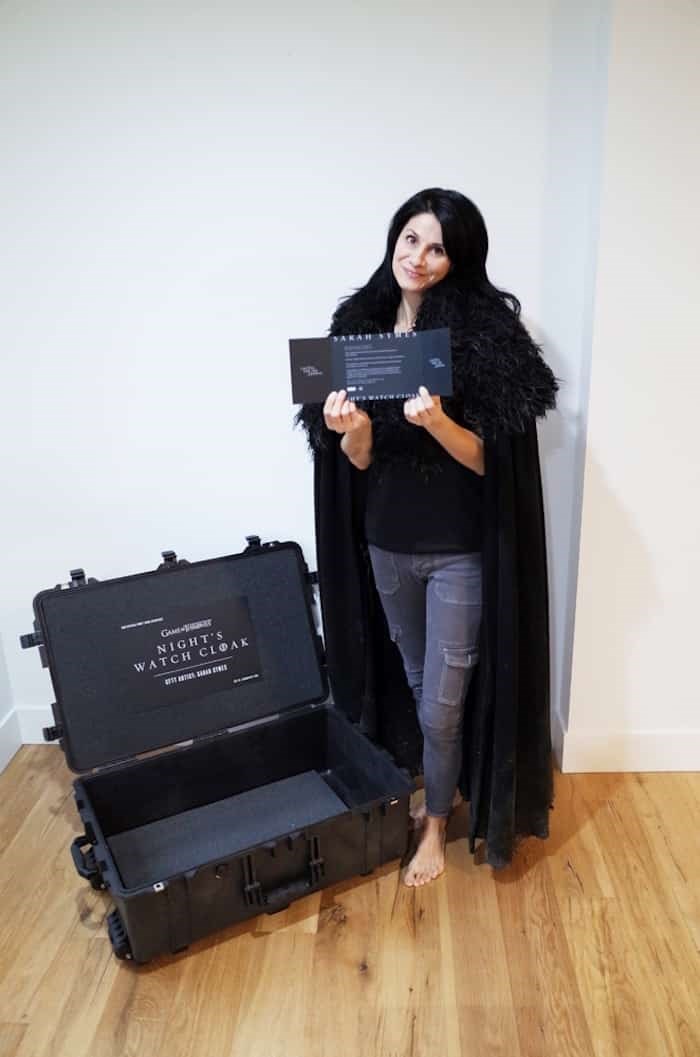 "I was really surprised by how well it fit me. It made me think maybe Kit Harrington is not that tall," she said with a laugh. "It was heavy, but it was beautifully weighted. It's one of those costumes that puts you immediately in character. I was there, just walking around the garden imagining I was at Castle Black. It really helped put me in the mindset."

In Squamish, Symes's art usually depicts colourful, abstract landscapes. Her triangles of colour juxtapose vibrant shades and earthy tones in an almost kaleidoscopic image, taking shape in paintings, prints or textile form. A resident of Squamish since 2014, her depictions of its iconic landmarks (including the Stawamus Chief, naturally) can be found in shops, cafes and offices around town. Perhaps most notably, Howe Sound became a blue arrangement of shapes on the banners hanging on downtown's street lamps.

"I hope the colour pallet reminds them of the show and all the scenes from the Night's Watch. I hope it gives them a sense of that mystery and tension that the show makes you feel," she said.

For this commission, the final piece was sewn together, mostly by machine but some by hand. Strips of the cloak's fur collar, wool lining and the belt are utilitarian against the cool blues of a jagged, icy background. Small glimpses of a pink sunrise or sunset warm up the piece, but Symes laughs as she says "Game of Thrones is not a warm and fuzzy show."

It was challenging to work with the materials, she said, as parts were saturated with mud.

"Putting the scissors through it the first time — that was a moment too. I felt like, if my neighbours knew this was sitting in my house in Squamish, there would be a line around the block of people wanting to try it on and come look at it, and here I am about to cut this thing up."

Now that her work is complete, Symes's creation has been shipped to New York, but even she doesn't know where HBO plans to show the collection's 18 works of art. The ‘Create for the Throne' campaign is set to launch on April 8, inviting fans to submit their own creations inspired by the show.

"I think it's really neat that the Squamish street banner artist was commissioned for Game of Thrones. I hope it makes people feel really good about the art that is flying downtown," Symes said. "It's nice to know we're connected and there are so many in the community who have made an influence internationally. It's nice to be reminded of that." 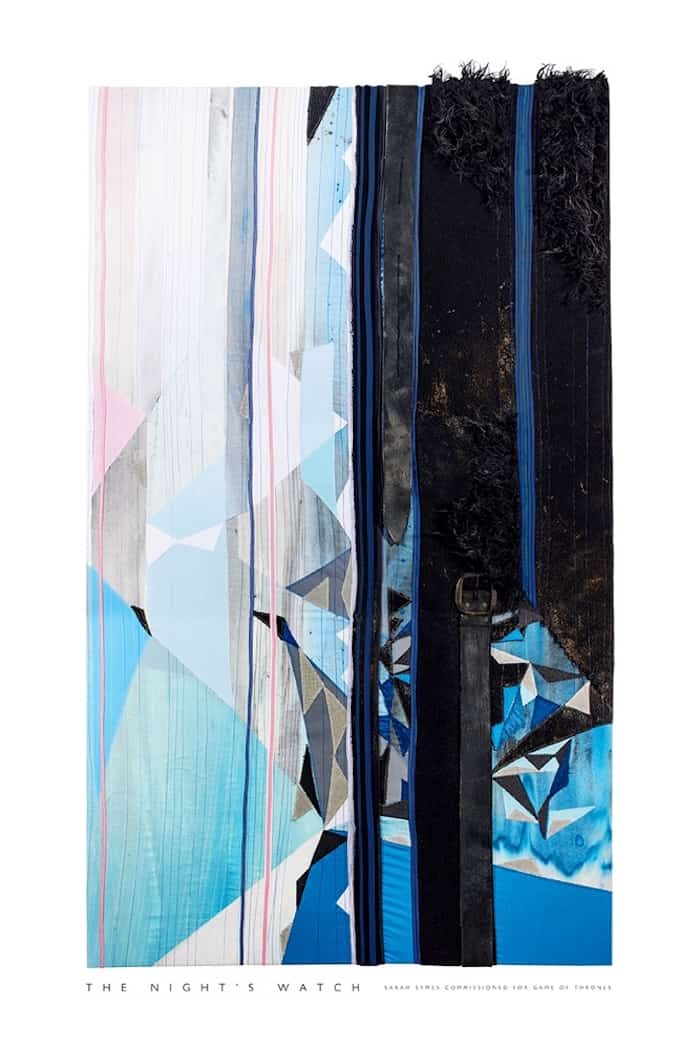 Reached the weekend before the campaign was revealed, Symes said she does expect a small percentage of Game of Thrones fans to be less than pleased she cut up their beloved Jon Snow's cloak.

When asked what she did with the leftover material from the cloak, Symes joked, "I'm not sure if I should tell you. I might get a knock on the door."

She was expecting the franchise to ask for it back, but for now, it's neatly folded in a box in her Squamish home. Once she removed the characteristic details, harvesting the best parts for her art, all that was left was a plain, black fleece.