This series had its genesis when I began photographing Vancouver area location shoots in the summer of 2010 to get over a post-Olympics funk.
Susan Gittins Jan 23, 2012 12:52 PM

Mega-producer J.J. Abram's new sci-fi mystery island series Alcatraz premiered last week in back to back episodes with the final big set piece on the roof of the Dominion Building downtown. Alcatraz, which is about a secret agency dedicated to finding and catching inmates from the infamous San Francisco prison gone missing 50 years ago and reappearing today, opened to 10 million viewers and a 3.3 rating on FOX, making it the second biggest drama premiere this TV season. next to modern fairy tale series Once Upon a Time on ABC. So the two biggest new hit American dramas both film in Vancouver. Coincidence?

"302 Vanished. 3 Must Find Them" is Alcatraz's tagline. Of the 3, petite blonde-bobbed Sarah Jones is the surprise action star : chasing a suspect who turned out to be her Alcatraz inmate grandfather in our introduction to her police detective character Rebecca Madsen in the pilot. She's the one doing the running, the jumping and sassing her superiors with classic lines like "Thanks for being a dick about it". Her partner Jorge Garcia as Alcatraz expert Dr. Diego "Doc" Soto has a way with a sharp wisecrack, "You've built the Bat Cave underneath Alcatraz" (as you'd expect from Lost's Hurley), and her mysterious new boss Sam Neill as Emerson Hauser makes a great mean face as he looms above a drugged Rebecca with the ominous words "Welcome to Alcatraz", but neither man is one for action. 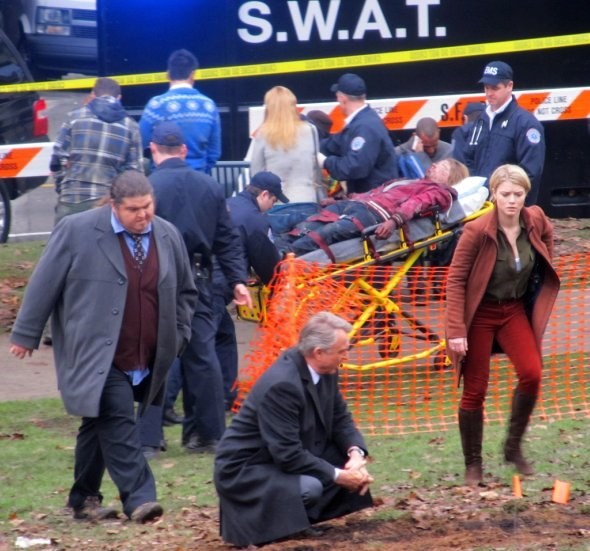 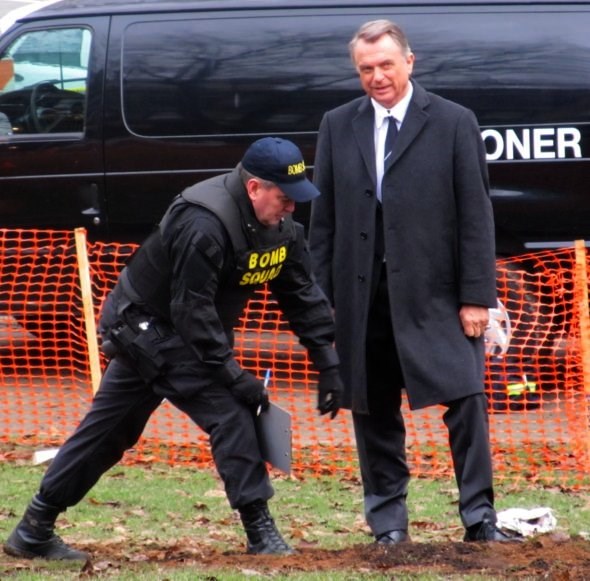 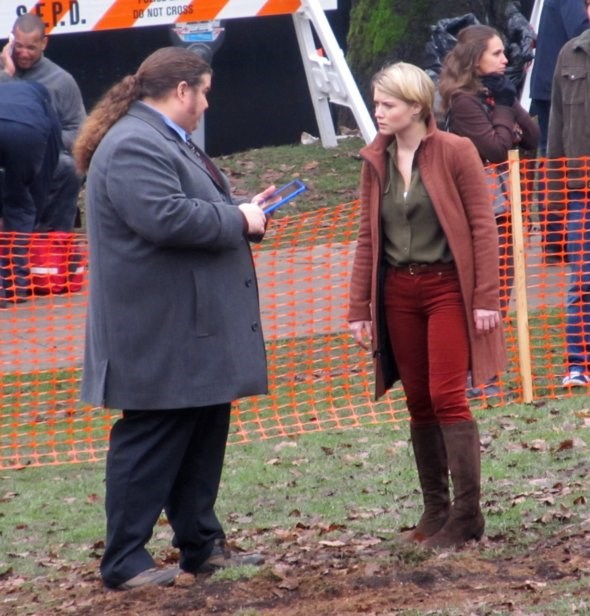 Apart from the 3, the other person of note in this secret squad is Hauser's equally mysterious partner Lucy Banerjee played by Parminder Nagra of ER, who is shot by the sniper convict Ernest Cobb during the filming of the second episode and then revealed to have her own past life on Alcatraz as hasn't-aged-a-day Dr. Lucille Sengupta. I spotted the Gastown alley crime scene but haven't seen Nagra on location yet.

I wrote about and photographed the filming of some of the first half-dozen episodes in my YVRshoots series post published in mid-October.

Two weeks later producers put filming of the final six episodes on hold in order to do reshoots on some of the completed seven. Behind the scenes, a showrunner drama unfolded over planned creative changes, with the creator and original showrunner Liz Sarnoff from Lost departing and Daniel Pyne joining Jennifer Johnson, also from Lost,  as co-showrunner. By mid-November, filming had halted completely as the new creative team worked on scripts and prepped for new episodes and additional reshoots.

J. J. Abrams later defended the retooling on January 8th at the Alcatraz panel for the Television Critics Association Winter Press Tour in Pasadena. He said it provided opportunities to improve Alcatraz as far back as the pilot. He also declared his love to critics for "serialized TV" but reassured them that Alcatraz would not get as intensely serialized as his other FOX show Fringe because the premise of 302 vanished inmates and wardens, with one coming back each week, is more procedural.

Not surprisingly, Jorge Garcia proved to be the star of the panel with his name even trending on Twitter because of all the critic tweets and RTs. Garcia told them he was the first person cast in Alcatraz, mostly because he'll do anything that J. J. Abrams asks him to and joked that he'll be washing Abrams's car next. But in a strange coincidence, Garrcia's girlfriend was writing a book about Alcatraz when he got the call. Asked about filming inside the actual prison for the pilot, Garcia described the place as feeling like "an old skeleton -- there are parts that are kind of crumbly". Sam Neill took his turn entertaining critics with reasons why his character Emerson Hauser looks so good for his age: "He knows a lot about facial creams. He's a very dangerous man, as well as a very smooth man." Of the three leads, Sarah Jones was the unknown quantity to critics, telling them how she started boxing to train for her role. Now that the premiere has aired, she's the one who should be trending on Twitter, or as one critic put it: "OK, uh, Sarah Jones...one question: Where have you been? Wow."

A day after the Alcatraz panel in Pasadena, I found the three leads back in Vancouver at Victory Square, catching their latest criminal of the week from America's past. This '63 -- called '63s because on this show 256 prisoners and 46 guards disappeared from Alcatraz on March 21, 1963 -- likes blowing people up with landmines. Alcatraz's shooting day started with rehearsals of three simulated landmine explosions in the park, which made a heck of a lot of noise and smoke. Handlers introduced a background performer to the two dogs he'd be walking in the scene. During the take, the dogs acted calm, cool and collected while I jumped, even though I knew the explosions were coming. You can see the stunt performer flipping in the air and then lying on the grass amid the billowing smoke. 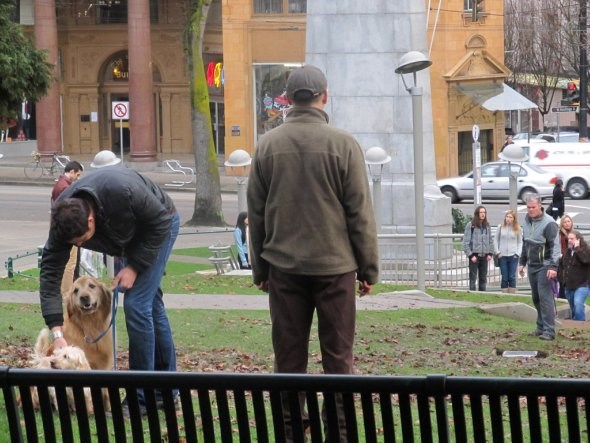 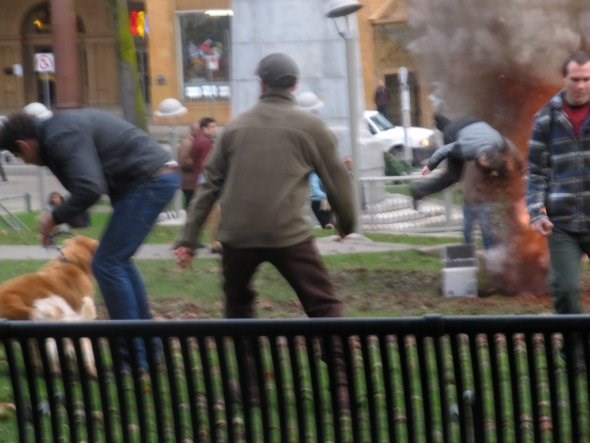 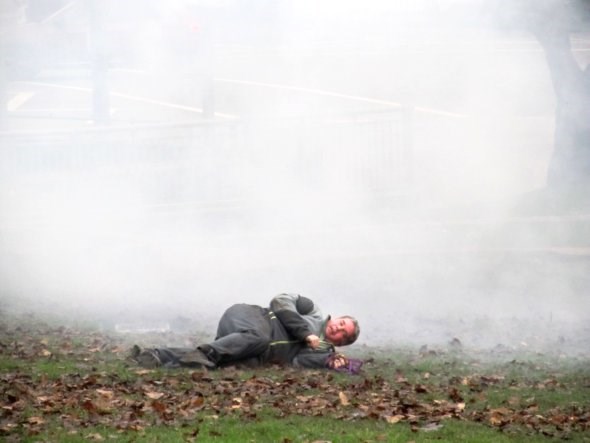 Later that morning, the three leads arrived on set to film scenes of them investigating the aftermath of the landmine explosions. 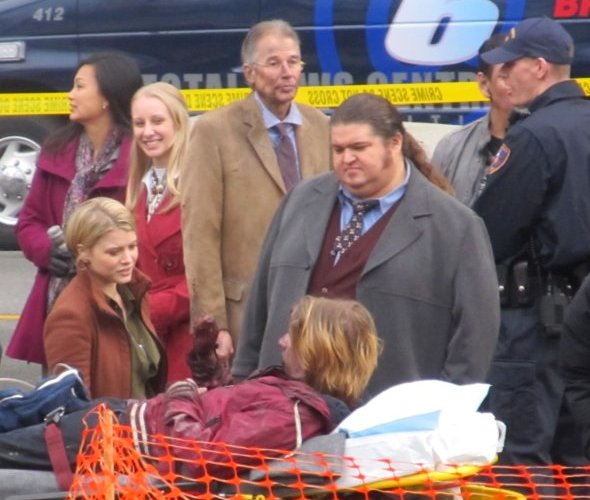 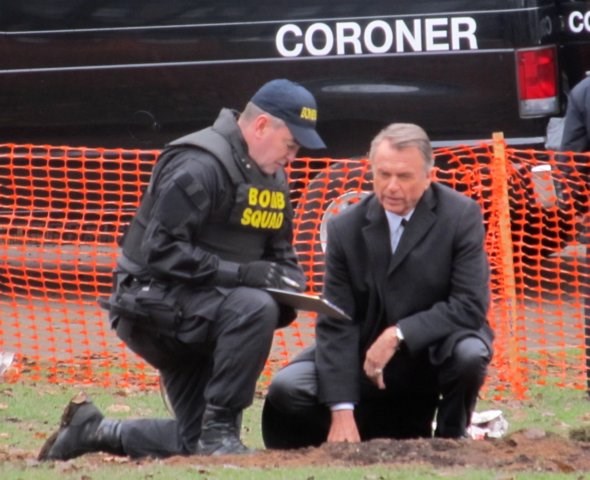 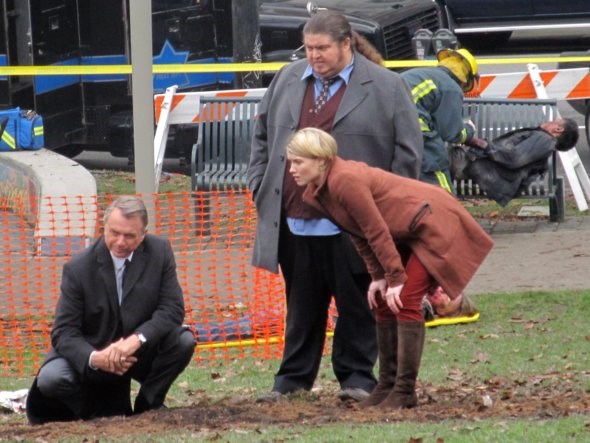 I missed the afternoon shoot of Sarah Jones chasing the '63 through the park, coming to a halt each time where some lucky fans had been allowed to sit. Action star Jones had more stunts to do the next day. Here she is standing near the Victory Square Cenotaph, waiting for her cue to walk up to Hamilton Street, gun pointed at the '63, who rolls a landmine towards her, forcing her to leap behind the blue car in the photo. A stunt performer demonstrated the stunt ahead of filming and crew placed a large black mat behind the car but Jones did the actual stunt in take after take. 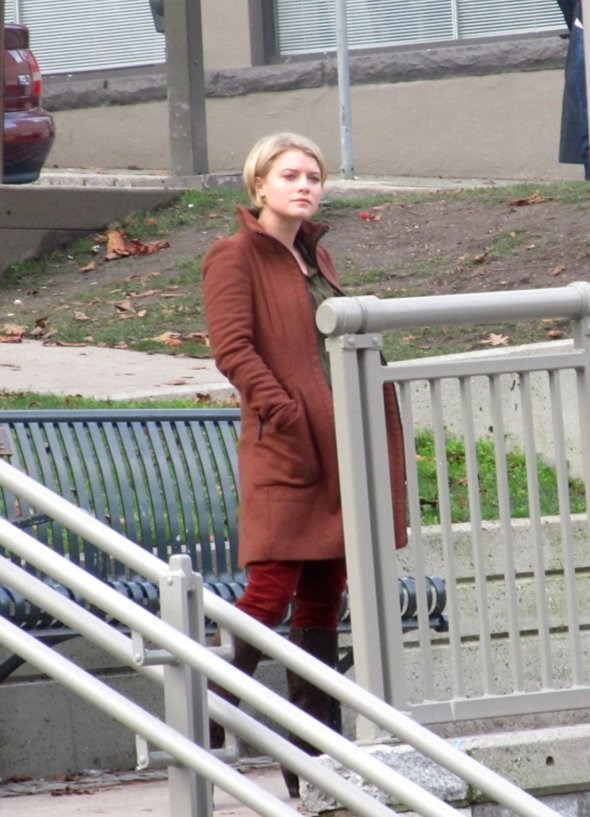 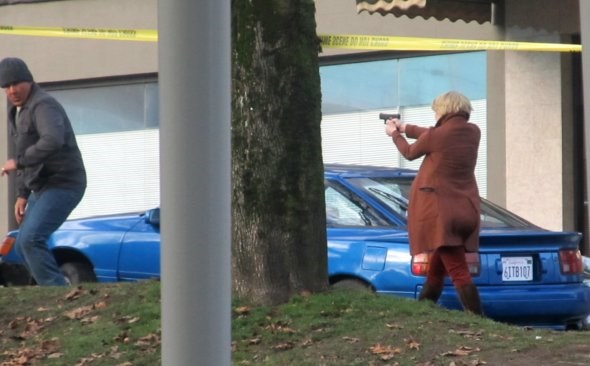 That afternoon, Alcatraz filmed the land mine explosion on Hamilton Street which Sarah Jones jumps away from. I overheard some Vancouver Film School students talking about it, but missed seeing it. And later, there were scenes down on Cambie Street of Sarah Jones sitting on the back of an ambulance talking to Jorge Garcia  near the vintage green Mustang.  Here's hoping the green Mustang becomes as much a symbol of Alcatraz as the Winchester brothers' black Impala is for Supernatural.

The next day, cast flew down to San Francisco for the red carpet premiere party on January 11th at the actual Alcatraz Prison on Alcatraz Island. Cast, producers, press and other guests took a ferry to the Rock where a press line was set up in the Alcatraz showers with Sarah Jones,  Jorge Garcia and Sam Neill answering questions. Other cast such as Parminder Nagra, Robert Forster (Ray Archer), Jonny Coyne (Warden James) and '63s Jeffrey Pierce (Jack Sylvane) and Joe Egender (Ernest Cobb) joined them in the Alcatraz Mess Hall, along with the producers, Warner President of Entertainment Peter Roth and  FOX President of Entertainment Kevin Reilly, to eat food served on tin plates as it would have been in the original prison and to watch the 2-episode premiere. Some of the scenes in the pilot had been filmed exactly where they were sitting. It sounds like a fun party, with Jorge Garcia photographed behind bars and mug shots of the press taken as souvenirs.

It was a smart move to take Alcatraz back to the Rock for the premiere party. It helps counteract concerns about Vancouver doubling as San Francisco in the series. (Grimm's showrunner went out of his way last year to say he did not want his Portland-set series to film here and got his wish. He's missing out some great crews, local acting talent and beautiful locales). 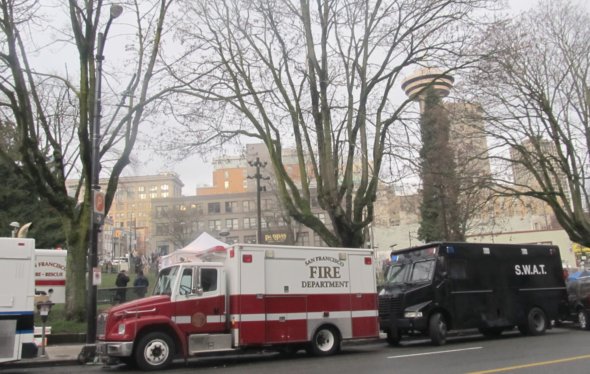 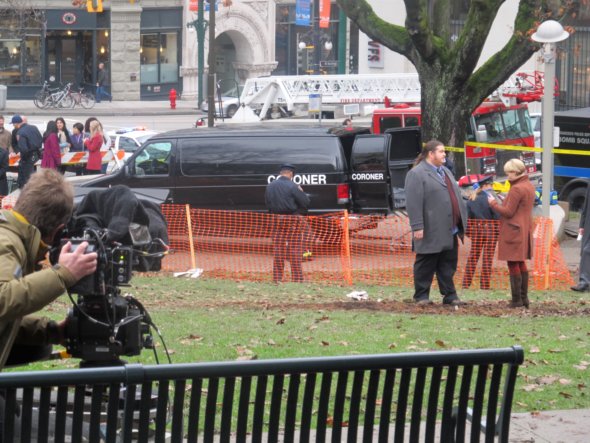 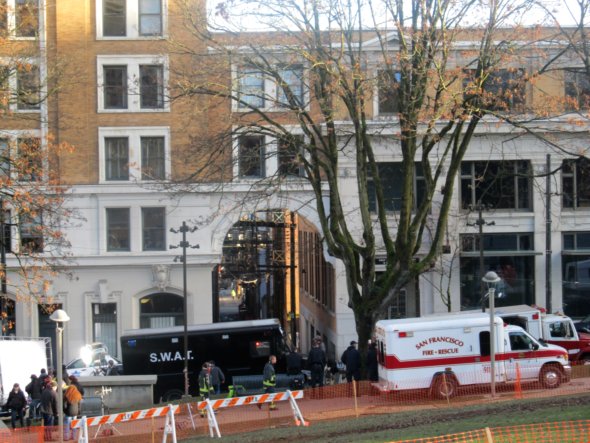 Tonight's episode three titled Kit Nelson features local acting legend Michael Eklund as a '63 child killer who returns his victims to their homes. Few play creepy better than Eklund who won a Leo for his guest performance last season on J.J. Abrams's other FOX show Fringe as pen-dropping havoc-creating Milo in The Plateau. Alcatraz is going to make a fun game of Spot the Local Actor, starting in the pilot with Camille Sullivan (Intelligence, Shattered and Rookie Blue) as Jack Sylvane's wife who divorces him and marries his brother. Paul McGillion of Stargate Atlantis fame is the grownup son of that union. And Robert Lawrenson of Sanctuary is the prematurely grey-haired man who's targeted by the shadowy group behind the reappearance of the convicts. In the second episode, Ben Cotton of Harper's Island and the when-will-we-ever-see-it? Battlestar Galactica pilot Blood and Chrome is the crazy chattering talker put in Ernest Cobb's cell to destroy his solitude. And in the upcoming fourth episode called Cal Sweeney, the '63 of the week is Eric Johnson of Rookie Blue as a smooth-talking bank robber. We should have many more rounds of this game to play as the season progresses.

Also of note, episode ten that Alcatraz begins filming this week features Sarah Jones's real-life boyfriend Theo Rossi from Sons of Anarchy (she appeared on the show and he is a series regular). This Sons of Anarchy tough guy plays Sonny, a businessman with a dark side and an ultra-violent convict in Alcatraz. No doubt Sonny will be joining the other captured '63s like mistreated thief Jack Sylvane and sniper Ernest Cobbs in New Alcatraz deep in the Vancouver woods in what appears to be an underground bunker, but is really a giant set on a North Shore Studios soundstage.

Alcatraz airs on Mondays at 9 p.m. on CITY-TV in Canada and FOX in the U.S.