This series had its genesis when I began photographing Vancouver area location shoots last summer to get over a long post-Olympics funk.
Susan Gittins Aug 22, 2011 5:00 PM

It sounds crazy to film Christmas TV in the summer heat but it happens every year. Of the more than a dozen Christmas-themed TV movies expected to air in the U.S. this December at least three filmed in Vancouver in July and August. And last week in Chilliwack, Syfy series Eureka filmed real scenes for its animated season five holiday episode called Do You See What I See?, laying out snow on a Christmas-decorated-to-the-max Wellington Street very early Thursday morning.

It took Eureka crew a couple of hours last Wednesday night to build Christmas, unloading trees with lights, garlands, candy canes, nutcrackers and a large snowman. The Euripedes statue/fountain in front of the Sheriff's Office got its own Santa hat. After it was all done, I watched them shoot a key scene of Colin Ferguson as Sheriff Jack Carter, Kavan Smith as robot Deputy Andy and Chris Gautier as Cafe Diem chef gathered around a bright red holographic projector designed to create a faux winter wonderland on the street. Unfortunately, as often happens in Eureka, something goes array  and thesuper photon generator sends a kaleidoscopic wave of holographic overlay from a video game that envelops the town leaving all its inhabitants animated. If you thought Eureka couldn't get any quirkier, imagine your favourite characters as Looney-Toon cartoons, claymation or anime, as well as the more regular CGI. Apparently, our cartoon heroes have until Christmas morning to reverse it or remain animated forever. 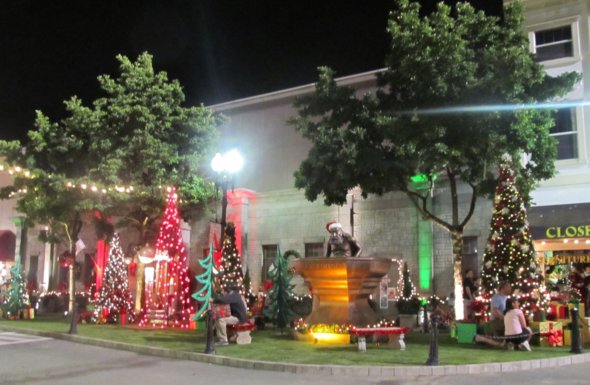 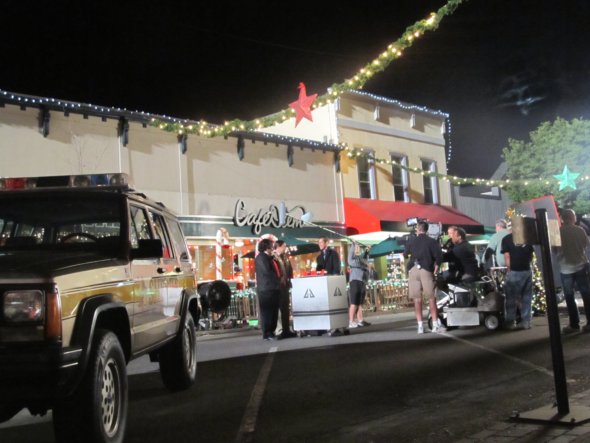 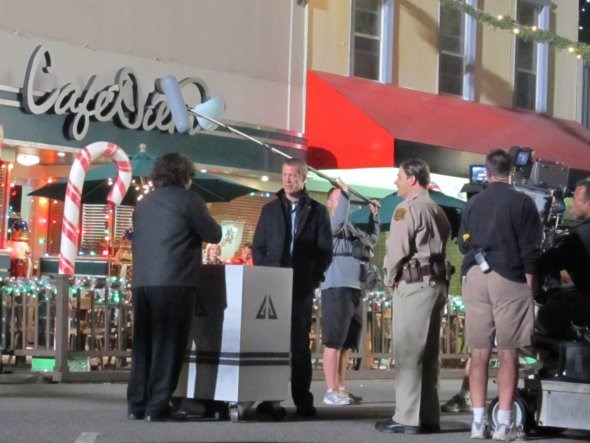 Chris Parnell of Saturday Night Live and 30 Rock fame reprises his role from last year's Christmas special as Dr. Noah Drummer, part of a star-studded roster of guest stars. Edward James Olmos of Battlestar Galactica voices a sled dog pack leader who befriends Deputy Andy and Matt Frewer of Alice and Max Headroom plays an animated version of himself as a polar bear who befriends Jo Lupo. And Jim Parsons, aka Sheldon of The Big Bang Theory, voices an anthropomorphized version of Sheriff Carter's Jeep (seen parked below) who's fed up with the way his owner treats him. 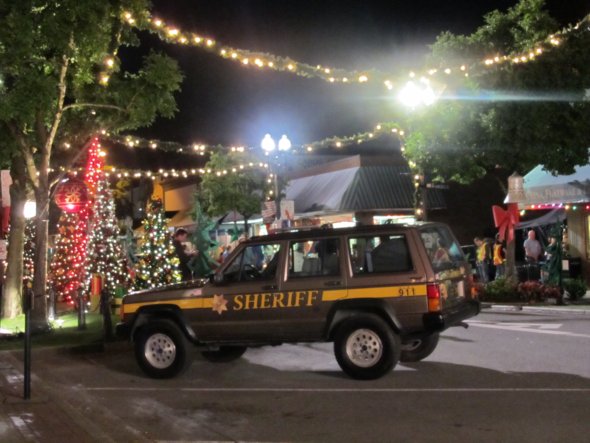 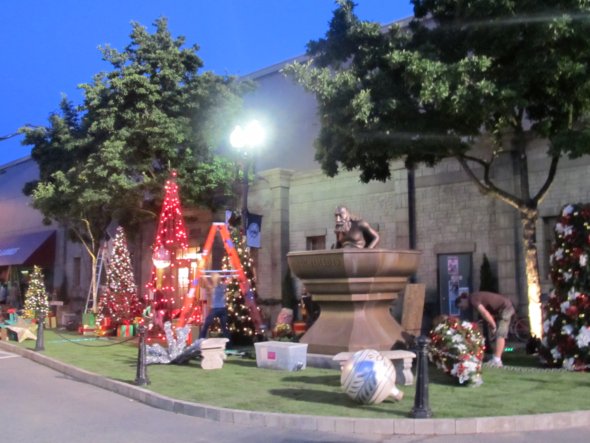 I arrived on set after suppertime to see Colin Ferguson as Sheriff Carter and Salli Richardson-Whitfield as Allison Blake film a scene at the Cafe Diem as armoured vehicles rolled by and soldiers marched down the Christmas-less street. I missed some of the earlier takes but watched at least half a dozen more of these soldier extras marching in the summer heat and then lolling on the imported grass outside the Sheriff's Office until it was time to go again. Other cast members relaxed in a tent nearby. I couldn't place Chris Parnell at first, wondering who this guest actor was giving Erica Cerra a big hug.

Filming had begun around 1:30 p.m. and wrapped around 3:00 a.m., with the snow scenes left to last when the temperature would be coolest. Crew then had to pack up all the decorations, facades and equipment to restore the street to normal for next-day shopping. Production assistants told me they'd never had so many visitors and photographers on set as that Wednesday. Word had spread of the show's cancellation and locals came to say goodbye. The next time anyone sees the snowman below could be at the Eureka liquidation and prop sale. 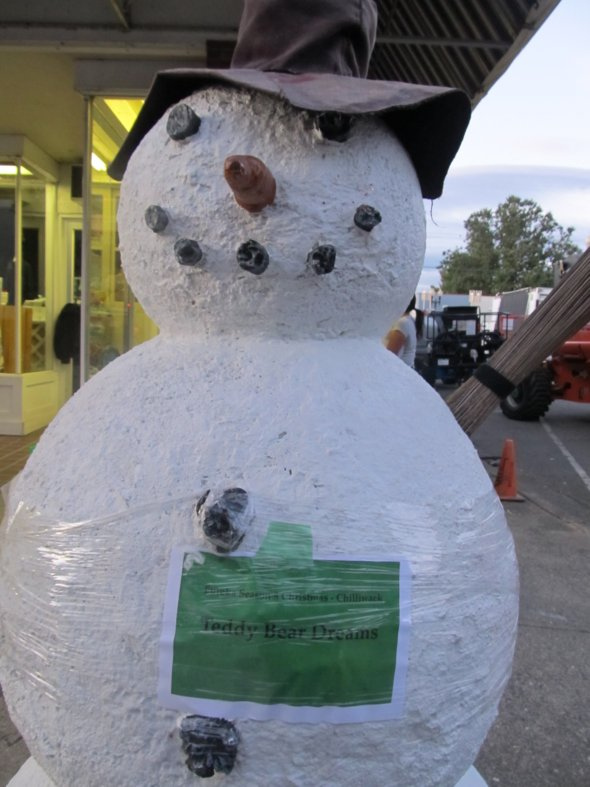 American network Syfy pulled a Lucy and yanked the football away, cancelling Eureka on August 9th and undoing a season six order of six episodes. Five days earlier, news had leaked from Syfy of a final six-episode season for Eureka and star Colin Ferguson tweeted his gratitude to the fans, only to retract five hours later as another report quoting Syfy sources suggested that season six would not be the end after all. Confused yet? Imagine what the cast and crew felt like. A next-day tweet from @syfy, aka Syfy senior vice-president Craig Engler, was as official as Syfy got about any of this: "Although we don't have a commitment beyond 6 episodes for the 6th season, we're hopeful this will not be the end of the franchise. #Eureka".

Sure enough, season six unravelled on a Monday night when Eureka was airing on the west coast. "BOOM" tweeted Colin Ferguson on the news of outright cancelletion and an undone renewal. A brand-new chief financial officer at Syfy network owner ComCast had nixed the deal, arguing it was too expensive to make more Eureka when Syfy's reality programming and wrestling cost less and got higher ratings. I guess he didn't quantify how much cancelling yet another sci-fi show in such weaselly fashion would hurt the brand Syfy, which already has a bad reputation in the U.S. as the network that will cancel your favourite  show. Once Ferguson had recovered from shock he was all class, tweeting: "It is only a good thing to make 80 episodes of TV. I want us all to remember and rejoice in that . . . that's all."

Eureka showrunner Jaime Paglia flew up to Vancouver immediately after the cancellation to console the cast and crew. Someone pointed him out to me on set last Wednesday night in Chilliwack. He did have good news to share: Syfy had coughed up enough money for a wrap-up episode to the series which started filming today. So the fifth and final season of Eureka will have fourteen episodes, including the stand-alone animated Christmas one which I can't wait to see. 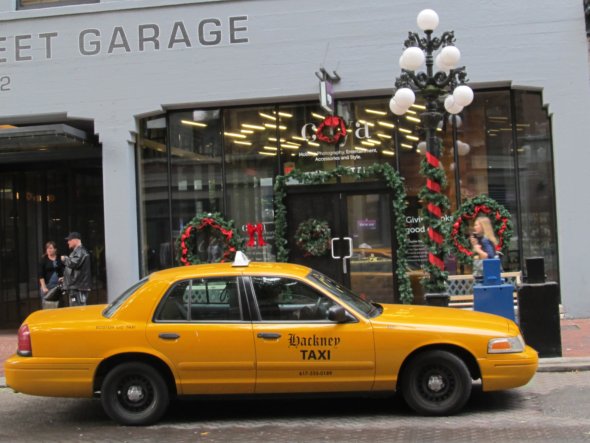 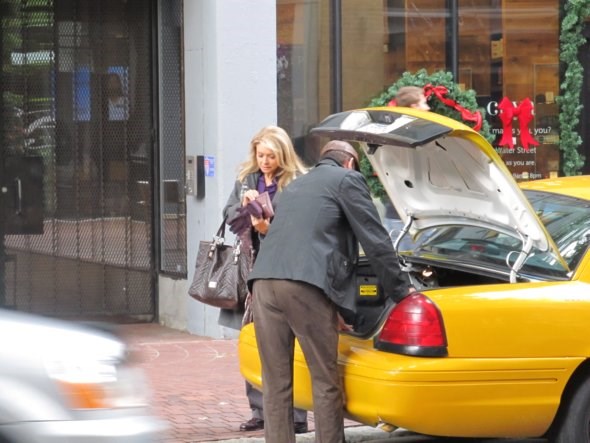 Luckily for the Christmas movies -- not for us -- it hasn't been a particularly hot summer here. Even so, actors and background perfomers swelter in their layers of winter clothing while crew works in shorts and t-shirts. Stargate Universe's Patrick Gilmore who has a small part in the Deck the Halls tweeted about seeking refuge in an air-conditioned trailer. But he recovered and I'll let him have the last word on filming Christmas in July/August: "I've always wished for Christmas every day . . . save for a couple of hot days in August perhaps."