#YVRShoots - Eureka On Location In Chilliwack

This series had its genesis when I began photographing Vancouver area location shoots last summer to get over a long post-Olympics funk.
Susan Gittins Jul 28, 2011 2:01 PM

Syfy's summer hit series Eureka goes largely unnoticed filming here, even when it transforms Wellington Street in Chilliwack into the Main Street of Eureka, a remote Oregon town populated by geniuses and scientists whose inventions have a habit of going array and threatening everything nearby. So it was surprising to me how big this small town is at Comic-Con (the annual San Diego geek fest), where thousands of fans sang Happy Birthday to Eureka star Colin Ferguson last Friday afternoon as he filmed it on his flipcam.

Syfy's summer hit series Eureka goes largely unnoticed filming here, even when it transforms Wellington Street in Chilliwack into the Main Street of Eureka, a remote Oregon town populated by geniuses and scientists whose inventions have a habit of going array and threatening everything nearby. So it was surprising to me how big this small town is at Comic-Con (the annual San Diego geek fest), where thousands of fans sang Happy Birthday to Eureka star Colin Ferguson last Friday afternoon as he filmed it on his flipcam.

Ferguson, who plays the relatively ordinary Sheriff Jack Carter who tries to contain whatever disasters Eureka's brilliant scientists unleash each week, flew down to San Diego with other main cast last Thursday after spending all day Wednesday filming an episode in Chilliwack. Crew had brought their own grass, a fountain/statue of Euripedes, large Eureka Sheriff's Office and Cafe Diem facades, an O2 bar, smart cars, Main Street and Euripedes street signs, Weather Predictor screens, Young Hover Drivers and 1-Hour Hologram Processing billboards and Eureka Hobby Expo and Craft Fair posters to transform two blocks of Wellington Street into the centre of a very eccentric fictional town. Ferguson even did his own stunts in scenes where he and young Trevor Jackson lept around trying to catch something we couldn't see, possibly the leg of a floating woman enacted by a green-suited stunt performer. 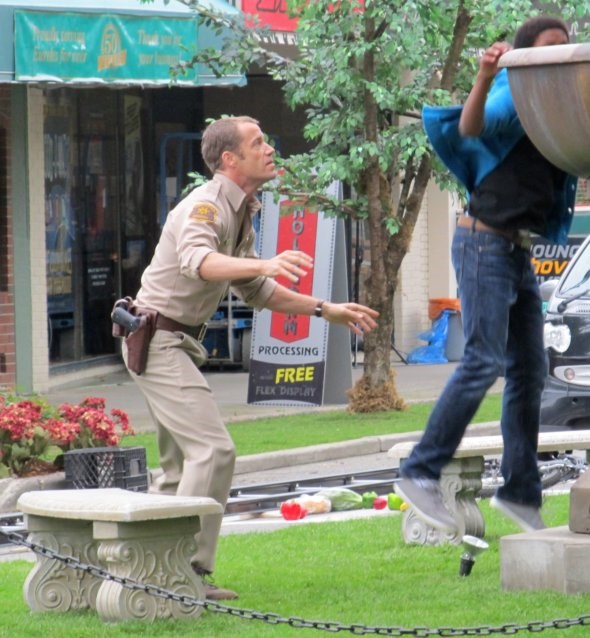 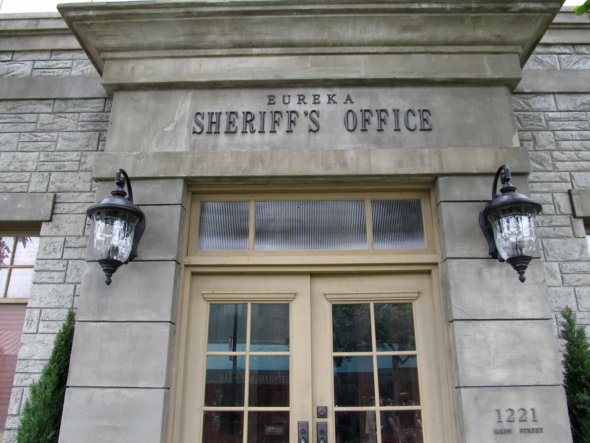 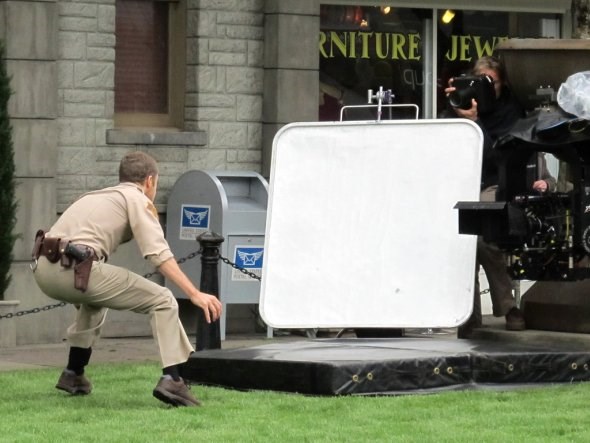 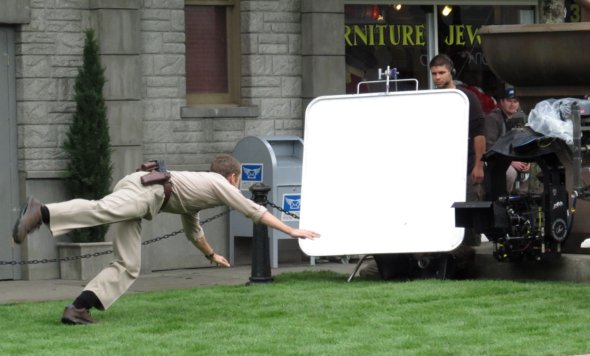 Crew even mimicked the movement of a floating woman with a mannequin leg.  Later the stunt coordinator demonstrated what would be a full-frontal collision between Ferguson and the green-suited stunt performer. After watching, Ferguson declared: "That's funny. I want a cup." No one had one but he shoved something makeshift down his pants anyway, joking with the stunt performer "We're friends. We like each other, right?" The stunt went off without incident and demonstrated Ferguson's famously wry humour to us lookyloos.

It's that humour which got him the lead role on Eureka and entertains me and countless others on Twitter. Here's a sample: @colinferg: I'm walking around a sunny Vancouver pretending I have a movie score punctuating my every action. . . it's pretty sexy . . .  He and his pal Billy Campbell from The Killing are a veritable Twitter tag team. The two actors time-share a Vancouver apartment with brief overlaps when Campbell is about to finish filming and Ferguson about to start -- @WOCampbell: . . . and Colly just moved into my place (and has already broken my Internet). He's like a large puppy who ate a caffeinated cat./@colinferg: Watching @WOCampbell try to remember his password . . . Don't think the cider is helping us. Moved in with @WOCampbell today and the first thing I did was break his modem. #notagoodfriend #sorry?

Such banter is one of the reasons the Montreal-born Colin Ferguson is beloved at Comic-Con. He came out ahead of the Eureka panel last Friday afternoon to greet and pose for photos with fans standing in one of the insane lineups, many of whom wouldn't get into Ballroom 20 which was at capacity. And after those who did get in sang Happy Birthday, Ferguson tweeted the hashtag #thisisawesome.

Comic-Con even had its own Cafe Diem (the show's aptly-named cafe) with sandwiches named after Eureka's characters, such as The Welcome Back, Jack and Allison's Timeless Ham N Swiss Cheese on Sourdough. I didn't get to go to Comic-Con but I did get to see the characters-not-the-sandwichs Sheriff Jack Carter and Dr. Allison Blake, played by Ferguson and Salli Richardson-Whitfield, come out of  Chilliwack's Cafe Diem (a furniture store with a facade), arms around each other, and meet up with her no-longer autistic son Kevin, played by Trevor Jackson who did the leaping above. Salli Richardson-Whitfield (see below) is one of the original cast members and directed her first episode of the show last summer. 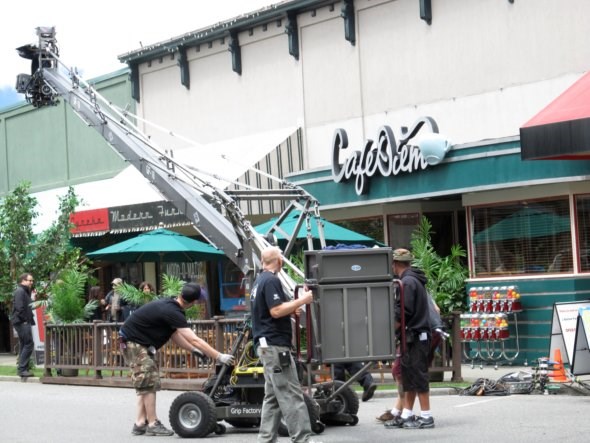 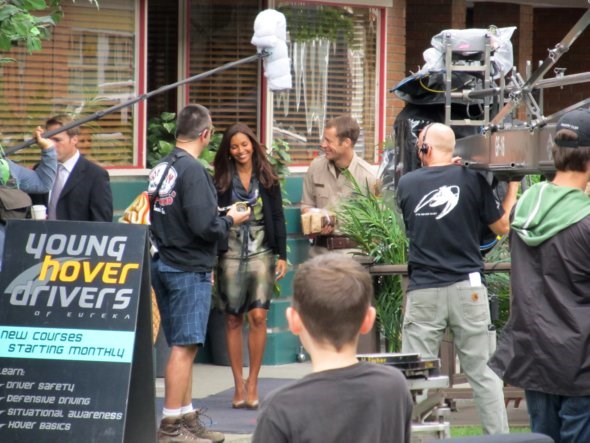 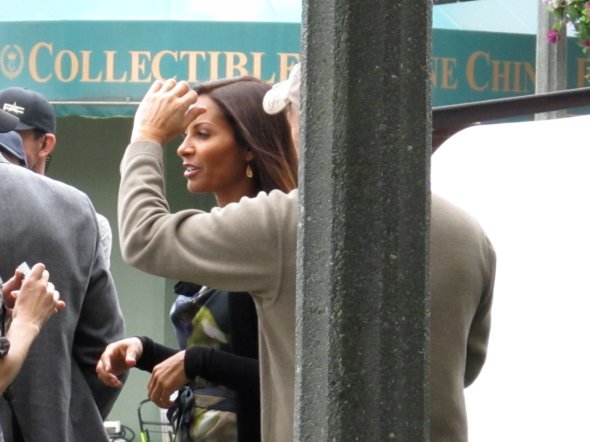 I stayed out in Chilliwack longer than intended waiting for the day's big stunt -- an exploding car -- because Eureka is a local legend for accidentally blowing out some storefront windows during one of its previous stunt explosions. About half a dozen crew pushed the rigged black car up the street to a spot between Cafe Diem and the Sherrif's Office. I watched Colin Ferguson, Salli Richardson-Whitfield and an unidentified third actor film a scene with the trio looking at the engine but had to leave before the car burst into flames (usually lasting only a few seconds).

Chilliwack is a long way from downtown Vancouver but worth the effort if you want to see Eureka filming. I started looking for them on location back in early April when they began season five's thirteen episodes without much success because Eureka spends most of its time inside Vancouver Film Studios on its vast Global Dynamics set. The blue-sky-green-leaf show did film in Chilliwack in late April, in the Coquitlam gravel pits in early May and in Surrey's Tynehead Park in mid-May with Joe Morton as Dr. Henry Deacon on set, before I finally found them in Vancouver's Quilchena Park -- I photographed a scene of Salli Richardson-Whitfield watching her TV son Trevor Jackson skateboarding in the park with skateboarding stunt performers. Eureka returned to Chilliwack at the end of May and then did an early June weekend stint inside BCIT's Aerospace campus in Richmond, where I photographed Neil Grayston as Dr. Douglas Fargo, before the show took a month-long hiatus.

Eureka resumed filming season five in early July with what might have been the partly-animated Christmas episode they announced at Comic-Con. I finally found them again on location in North Vancouver in mid-July, filming a scene with two Vancouver actors made good as Eureka cast: Erica Cerra as Joe Lupo and Vancouver Film School grad Niall Matter as bad-boy physicist Zane Donovan, now doing more action-hero stuff on the show and back in a relationship with Cerra's character after a time-line reboot  split them up at the beginning of season four. Producers assured fans at Comic-Con that they will never go back to the original timeline of the show but there might be intersections. 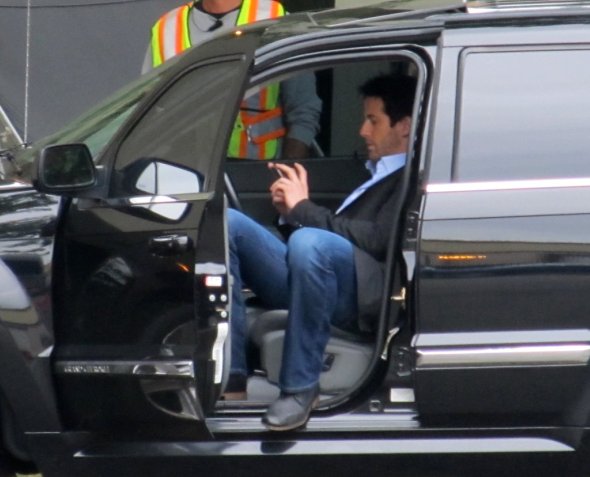 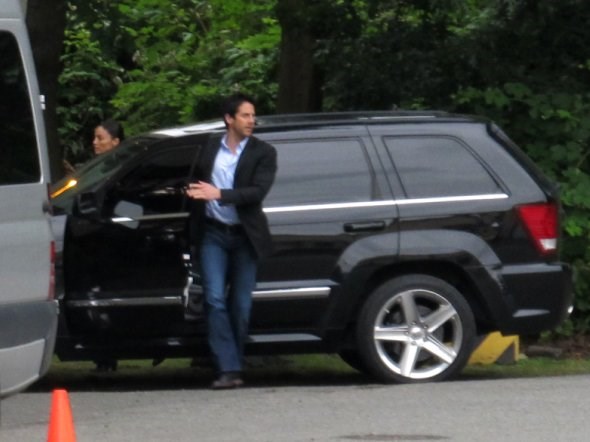 Eureka does plan to return to Chilliwack in August which might be the last chance to see this quirky show on location before season five wraps at the end of that month.  I met a lot of locals who regularly vist the set and are known to the crew by name. It has to be one of,  if not the friendliest, most casual shoots around here, advertised ahead of time in the local Chilliwack paper with the tagline:  "Come downtown to do all your shopping and watch some local filming."

In the U.S. you can watch the back half of Eureka's season four episodes on Syfy right now and in Canada you'll be able to watch season 4.5 on SPACE channel this fall.