This series had its genesis when I began photographing Vancouver area location shoots in the summer of 2010 to get over a post-Olympics funk.
Susan Gittins Oct 14, 2011 4:04 PM

Delayed-viewing Friday night hit Fringe recently changed its promotional tagline from "Where is Peter Bishop?" to "Here is Peter Bishop" followed by "Witness the Return Soon". Hopefully this signals the on-screen return of one of the show's trio of main characters -- the ceased-to-exist Peter Bishop -- as well as Joshua Jackson, the actor who plays him. Perhaps that on-screen return will be as soon as tonight's episode, Subject 9, filmed partly at the Brixton Cafe in Chinatown and the Sherburn building in the West End.

After all, Joshua Jackson made his first on-set appearance on August 23rd at that Sherburn building location where Fringe filmed part of Subject 9, the fourth episode of season four. Jackson filmed inside for half an hour wearing a shirt with motion-capture tags so that ghostly images of Peter Bishop could be inserted into the first three episodes of the season. But it's also possible that the Sherburn building will be the place where Peter Bishop finally breaks through into the altered Fringe timeline. I'm hoping it will be at fictional Reiden Lake instead -- in actuality Rice Lake in North Vancouver where Fringe filmed a couple of weeks later -- because Peter Bishop returning to existence at Reiden Lake would provide symmetry in Fringe mythology.

However it happens on screen, Peter Bishop has been back on the streets of Vancouver for almost two months. For example, Fringe fans got to see Joshua Jackson filming a scene today as Peter Bishop with Seth Gabel as original-universe Fringe Division agent Lincoln Lee outside the Orpheum Theatre, where so many pivotal Fringe events have taken place. 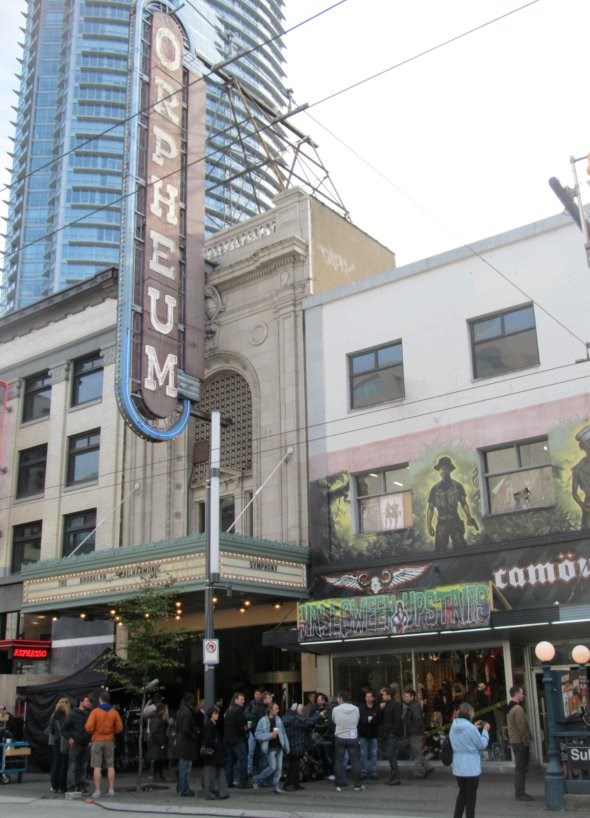 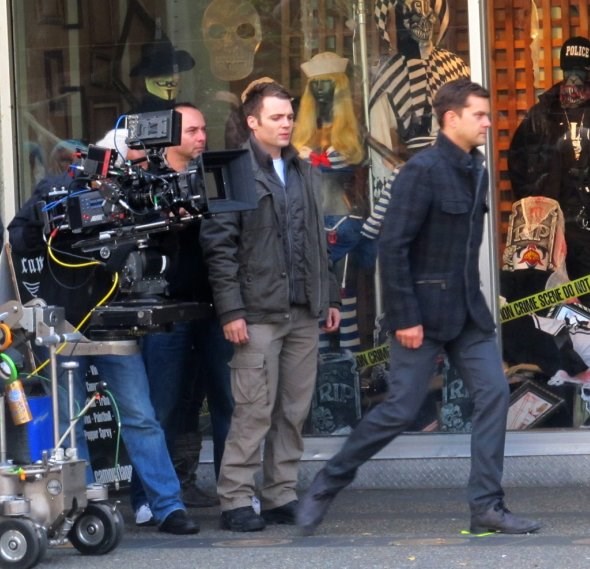 Fringe fans have missed Peter Bishop on screen but his disappearance in the season three finale last May did lead to one of the most amazing expressions of fan love I've ever seen in a video called #WhereisPeterBishop?, uploaded on YouTube ahead of the season four premiere on September 23rd. "The following footage was shot on location by Fringe fans around the world" -- it says in the opening.

I had met some of these international Fringe fans at the West End and Chinatown shoots in August but didn't know then that Australian fan Lyn helped instigate this fan video to promote the show and contributed several photos to it, including one of a Fringe crew member holding up a Where is Peter Bishop? sign in Chinatown. Vancouver fan Tessa took a separate photo of a Where is Peter Bishop? sign at that same location, this one with John Noble relaxing in his tent in the background.

While most of the visiting international fans met Joshua Jackson this summer outside the Sherburn building in the West End, it would be quite a while before I found him filming on location at a house in Kerrisdale in mid-September for episode six, And Those We've Left Behind. Some kind of bubble has encased the house with Peter Bishop inside. I watched them film a scene of Peter's beloved Olivia Dunham, played by Anna Torv, aka Fringe's lead and the hardest-working actor I've seen, and other members of the new Fringe Division standing and staring at what will be a disembodied arm reaching through this bubble. In between scenes, Joshua Jackson met with fans, including a small furry one below. 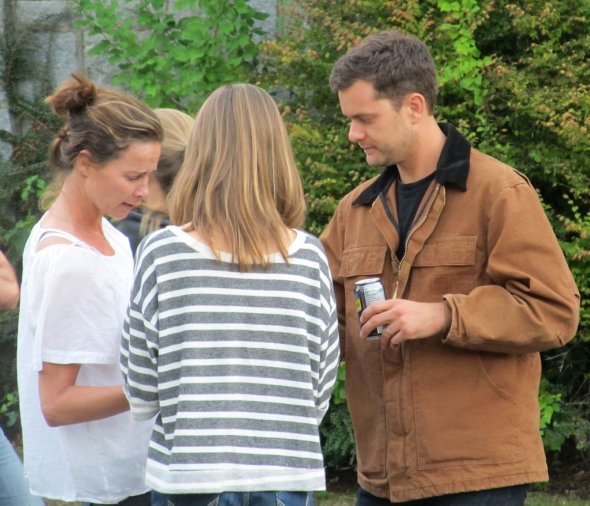 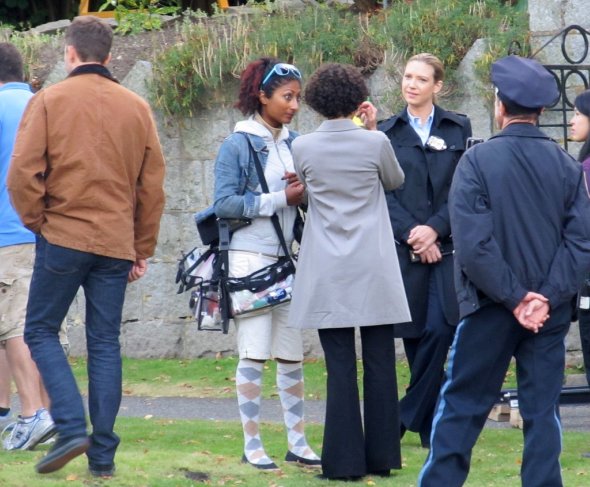 As you can see above, there is no interaction between Joshua Jackson as Peter Bishop and Anna Torv as Olivia Dunham in scenes, at least from what I've seen so far. Peter Bishop is a stranger to his Olivia and to his "father" Walter Bishop played by John Noble -- he remembers them but they don't remember him. Torv recently said in an interview that Peter will have to "earn his stripes" with Olivia.

Now that he's back, Joshua Jackson is busy earning his stripes in this Peter-centric season promised by Fringe exec producers Jeff Pinker and J.H.Wyman. On the second day of filming at the Kerrisdale house, Jackson spent much of his time in a harness doing stunt work to mimic flying through the air as if attempting to break through the bubble encasing the house. Someone watching said he was in every scene that day. A while later, on September 23rd, fans spotted Jackson filming scenes inside a store on the corner of Yukon and Broadway, a mere two or three blocks away from the Bishop house where Peter and Walter lived in the previous timeline. Australian Fringe fan Lyn wondered what had happened to Peter Bishop's classic pea coat in this new reality, lamenting that Jackson was still dressed in the uncharacteristic tan jacket.

Over the next few weeks, Fringe filmed in several downtown locations, including a historic apartment building on Haro Street near Stanley Park, where Joshua Jackson had  the day off. But he just started, some joked. Fringe also filmed in Yaletown at an apartment tower and in the alley behind it off Davie Street. I dropped by these locations but missed the daytime exterior scenes.

I didn't find Joshua Jackson again until episode eight, Back to Where You've Never Been, doing a stunt fight in a parking lot off Arch Alley near Victory Square last week. He and Seth Gabel as our universe Lincoln Lee seem to be having a bit of bromance, rehearsing wrestling a gun away from guest star James "Bam Bam" Bamford (SGU Stargate Universe's stunt coordinator and well-known local tweeter). 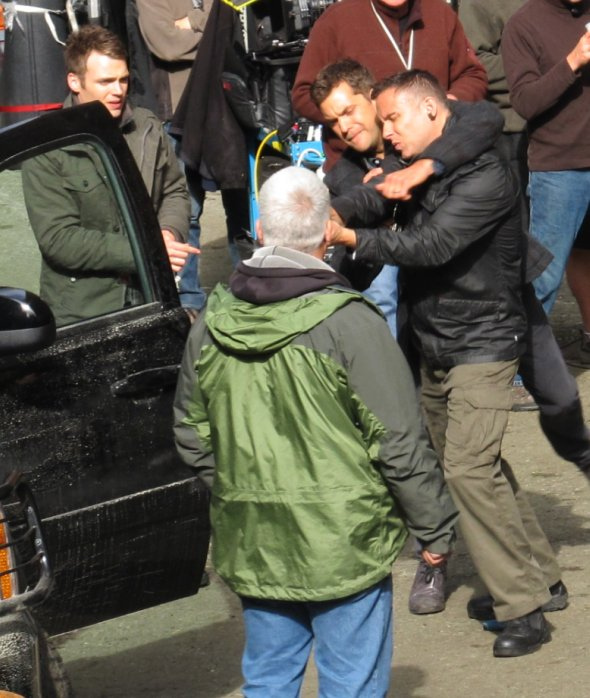 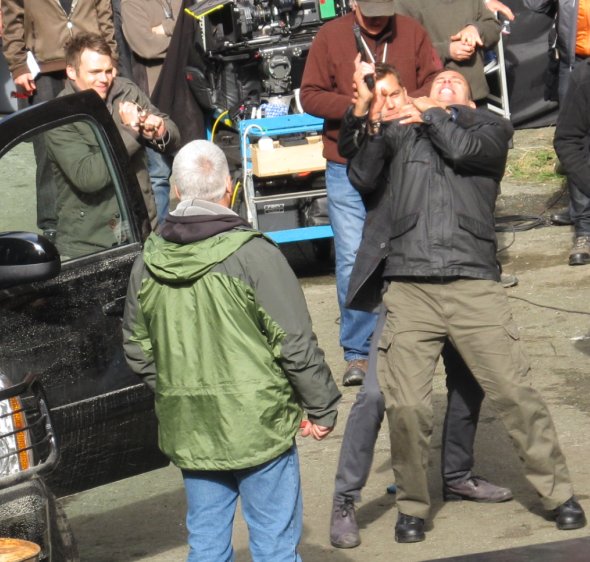 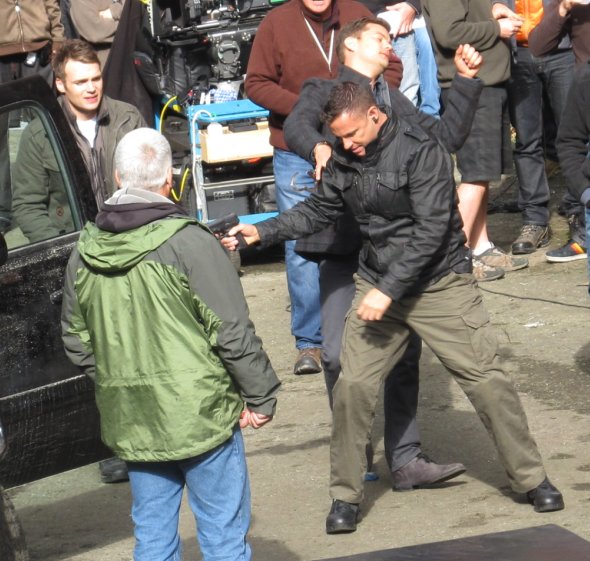 Stunts are well and good but what do you think got fans most excited: Peter Bishop's new pea coat. 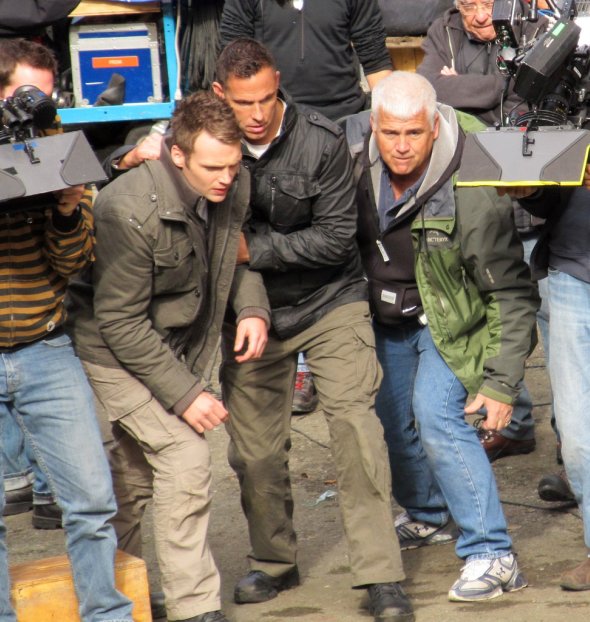 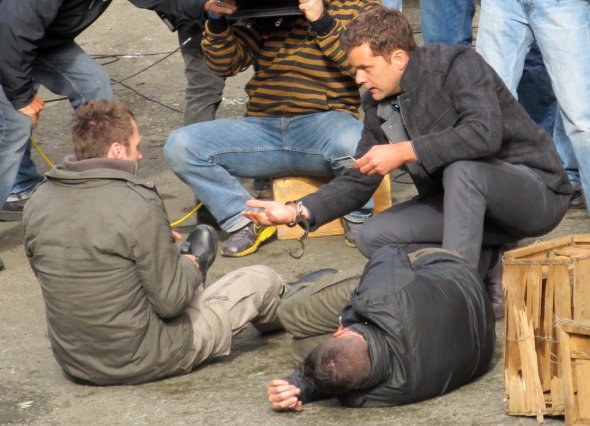 I won't talk about the handcuffs because I have no idea why Peter Bishop is in the alternate universe to begin with. What I can say is that Anna Torv appeared on location in Arch Alley as red-headed, combat-boots-wearing Fauxlivia, but no one saw her do scenes with Joshua Jackson as Peter Bishop. Her scenes were done with Seth Gabel as original-universe Lincoln Lee (and with alt-Lincoln Lee outside the Orpheum Theatre today.)

Already much is different in this new timeline: Col. Broyles played by Lance Reddick is not dead. Olivia killed her step father. And these are apparently dwarfed by bigger changes that we haven't seen yet, part of a bigger arc over season four. It makes me wonder: could there be two Peter Bishops in this new reality? That really would make this Peter's season.

Update: I called it right on Peter Bishop returning to existence at Reiden Lake which means I'm wrong about two Peter Bishops in this new reality. One is enough.