This series had its genesis when I began photographing Vancouver area location shoots in the summer of 2010 to get over a post-Olympics funk.
Susan Gittins Oct 3, 2011 4:41 PM

Psych wrapped filming its sixteen episodes of season six last week in Vancouver and is set to debut the first one a week Wednesday on October 12th on the USA Network. A movie-style trailer of the season opener entitled Shawn Rescues Darth Vader reveals star James Roday wearing a tux in full James Bond-mode. Before it airs, some lucky Psych-os, as fans of the comedic-detective series are affectionately known, will attend this Thursday's Psych Fan Appreciation Day at the historic Ziegfeld Theatre in New York  to enjoy a popcorn-fueled advance screening of the season premiere with creator Steve Franks and the full cast in the audience.

Psych has been shooting season six here for six months but films out of order so although I wrote about and photographed scenes from the first filmed vampire-themed episode This Episode Sucks in March, it turned out not to be the season premiere. Similarly, the last filmed episode shot shot in Vancouver  last week will not be the season finale but likely episode fourteen.

What's Psych about? The season six trailer's tagline sums it up: A City Under Seige/One Man Stands Prepared/To Predict and Serve. That one man would be James Roday, who plays a former Santa Barbara police sergeant's son Shawn Spencer, who's conned the police department into thinking he's a psychic when he really uses his superior observational skills to solve crimes. Dule Hill is his best friend and police consultant partner Burton "Gus" Guster.

James Roday admitted this summer that Psych is a pretty wacky show ahead of Comic-Con in San Diego, where it is a popular attraction because of the way it crosses over into all sorts of subcultures like vampires, super heroes and Star Trek. Still, the long-running series is at its wackiest in its love for all things '80s. They must have made an exception last week for guest star French Stewart from the classic '90s comedy 3rd Rock From the Sun, as you can see below. 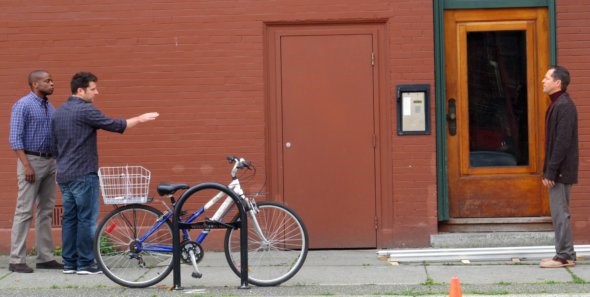 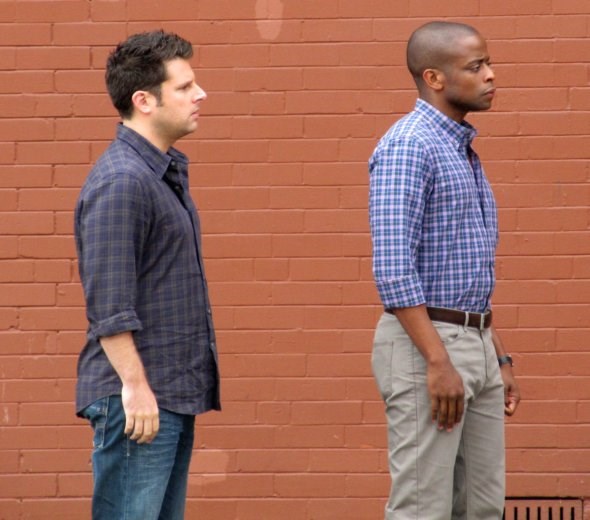 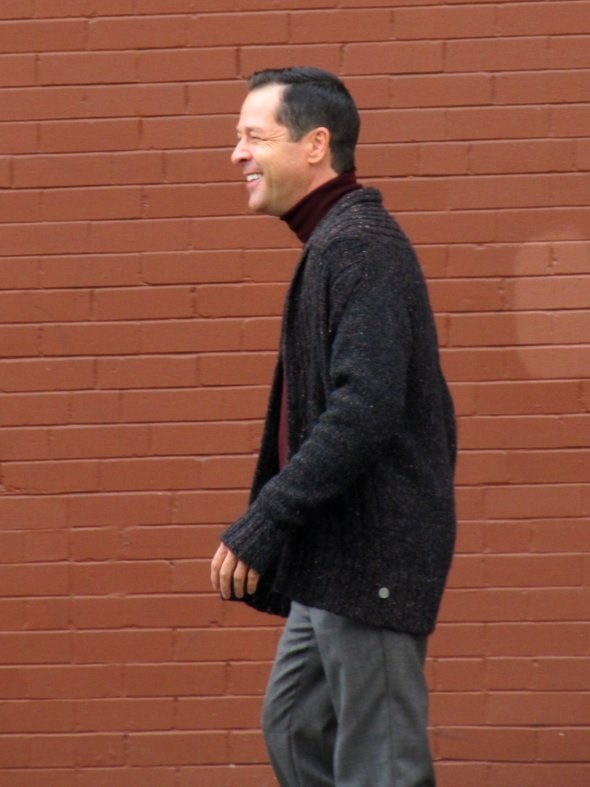 Since I watched and wrote about Psych filming its baseball-themed season-six episode Dead Man's Curve Ball in Nat Bailey stadium this past June, the producers have hosted another parade of guest stars, but none bigger than Star Trek's original Captain Kirk himself, William Shatner as the estranged father to junior Santa Barbara police detective and Shawn love interest Juliet, played by Maggie Lawson. Shatner filmed here in early June during the Stanley Cup Final games and got caught in the Riot after leaving Rogers Arena. Later he sent a video message to the Psych panel at Comic-Con about his upcoming appearance on the show.

In mid-July,  the Fairmont Chateau Whistler played host to the episode called Neil Simon's Lovers Retreat about con artists played by Jason Priestley and Jennifer Finnigan who set their sights on the weekend spa where lovers Shawn and Juliet are staying. I heard about this three-day shoot in late June when an ad appeared in Whistler's The Pique newspaper announcing "Extras needed in Whistler!!! The NBC Universal series Psych coming to Whistler". Psych wanted good-looking men and women between 22 years old to seniors who lived in Whistler to work as paid extras from July 11th to 13th. TV sites said Arrested Development's Tony Hale would be guest-starring as well, but I couldn't get away to see any filming that week.

A couple of weeks later, Psych filmed an Indiana Jones-themed episode, the third installment featuring Pierre Despereaux played by Cary Elwes. Shawn and Gus apparently reunite with Despereaux in a race against a gang of art thieves to find an old dagger. The aptly-titled lndiana Shawn and the Temple of the Kinda Crappy, Rusty Old Dagger filmed partly in the UBC Thunderbird arena but I didn't find out until after they'd finished.

So it had been quite a while since I'd been to a Psych location shoot when I found junior detective Juliet and head detective Carlton "Lassie" Lassiter, played by Timothy Omundson with a bandaged nose, in early September at the back of a vine-covered derelict house near Commercial Drive.  Psych filmed at several other locations near The Drive and East Hastings but I never found out which episode this was. 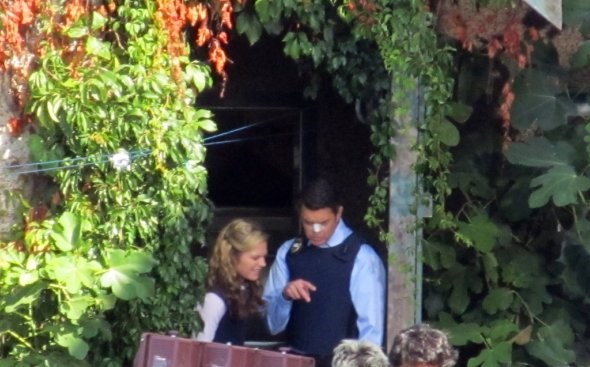 Psych had its wrap party for cast and crew on Saturday, September 10th, and a good time was had by all. Guest Colin Ferguson from Eureka jokingly vowed "no more booze for me forever" the next day on Twitter.

With only three more weeks of filming to go, it was finally time for Timothy Omundson's star turn in a The Shining-themed episode (see photo below of Omundson in full Jack Nicholson Heeeeere's Johnny mode), mostly filmed in a West End apartment building, which rented itself out to buy a new boiler. James Roday directed the episode called Heeeeere's Lassie! about Omundson's detective character moving into a new seemingly-cursed building where he encounters a quirky nurse neighbour played by red-headed Sara Rue and a creepy manager played by Lou Gossett Jr.  "Just got in from a Looooong day at work. Well...5 of them to be exact. Gonna clean my gun, press my bullet proof vest and hit the rack" Omundson tweeted about finishing Heeeeere's Lassie! 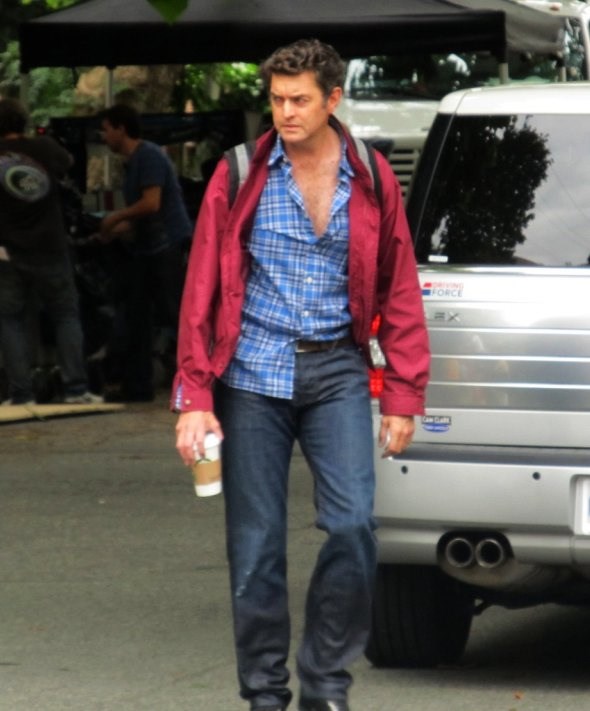 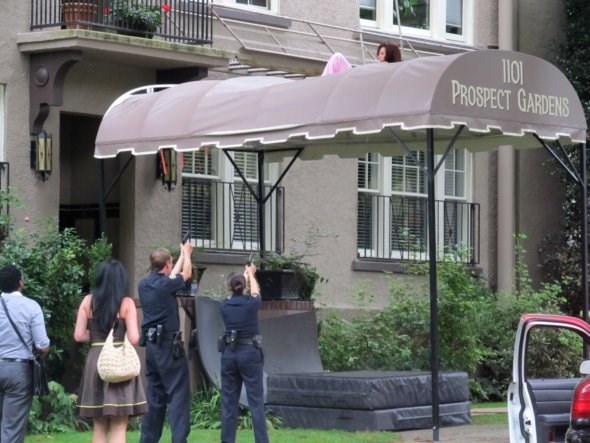 Last week Psych set up on location first on Fraser Street inside the Polish Community Centre and then on West 8th Avenue off Main Street at the Scout Boutique, turning it into a storefront for psychic Miss Irvana Nirvana in the last filmed episode of season six. I watched them shoot a funny scene with a tracking shot of James Roday and Dule Hill backing away from guest star French Stewart. Roday points and then tells Stewart that it's not his fault, eventually offering him a ride. Hill pushes him as if to say that's not a good idea. As they approach the car, Stewart's character calls shotgun. 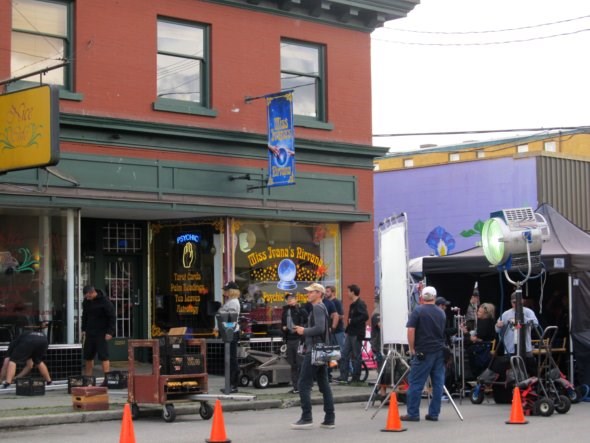 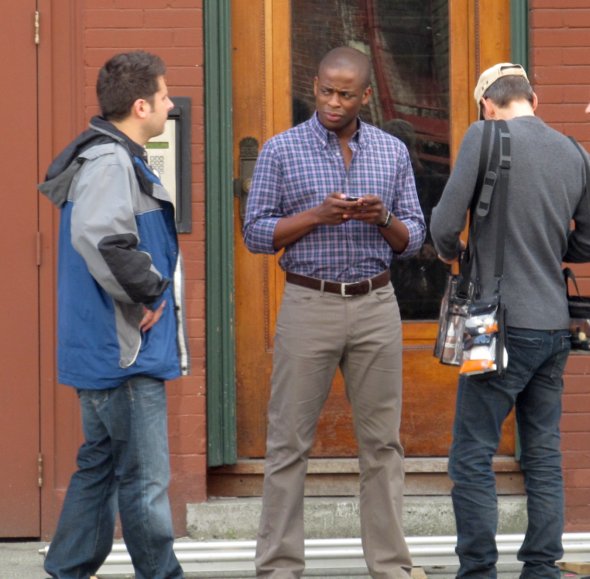 I returned that night to see that block of West 8th Avenue lit up and filled with smoke from smoke machines, an unusual sight for Psych. 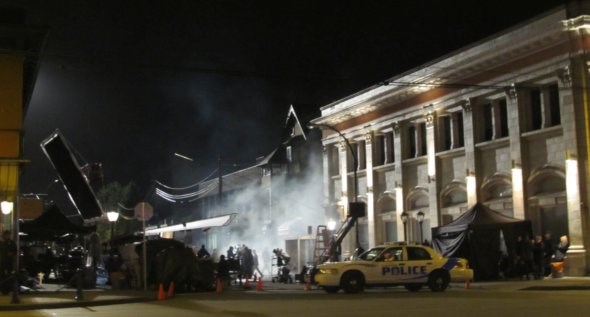 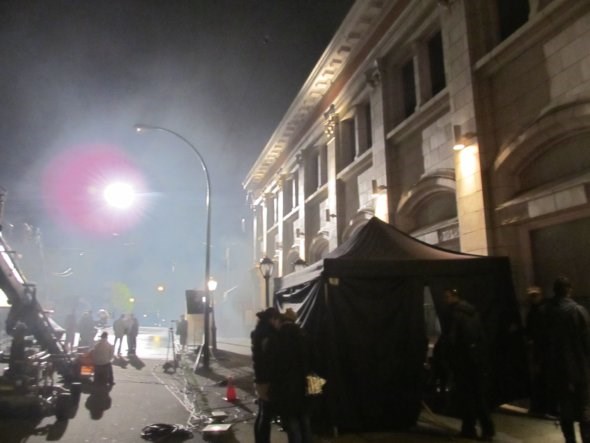 The two figures silhouetted in the light are a side-by-side James Roday and Dule Hill, a comedy duo for the ages and totally deserving of their Ewwy nominations, given by Entertainment Weekly magazine to those overlooked by the Emmys. Here's hoping the Television Academy takes note next year and gives them the real thing.