This series had its genesis when I began photographing Vancouver area location shoots in the summer of 2010 to get over a post-Olympics funk.
Susan Gittins Apr 17, 2012 4:16 PM

Imagine two Vancouver-as-Vancouver TV series filming here, with B.C. Place stadium, the central Vancouver Public Library, Woodwards' revolving "W", Granville Island, Stanley Park and other local landmarks as themselves. It's so rare for us to have one Vancouver-set series filming here, far less two. So come to our city's first Fan Expo this Saturday, where you'll get sneak peeks of both, as well as the chance to meet the showrunners and casts.

Continuum is about some kind of future officer named Kiera Cameron who travels back in time from Vancouver in the year 2077 to Vancouver in the year 2012, chasing a group of terrorists who plan to change the future from the past. You may have seen some of the spectacular-future-downtown-skyline teasers on Showcase, where the 10-episode series debuts in late May. Or the 2012/2077 split skylines on the Continuum show poster.

Continuum stars Rachel Nichols as Kiera Cameron, who joins the local Vancouver police force with Victor Webster as her 2012 detetective partner. You can see Nichols as her character filming in Vancouver with the Woodwards "W" in the background in a promo photo from the show. I've photographed Continuum filming at Victory Square, outside and inside the central Vancouver Public Library, The Centre and CBC Vancouver so far with prop Vancouver Police cars and VPD extras alongside real ones. Below is my photo of Nichols exiting an unmarked police car with the Vancouver Public Library reflected in the windshield. And below that is my photo of  Nichols and her co-star Victor Webster filming in a snowstorm at Victory Square. It will be a veritable Vancouver-palooza in each episode. 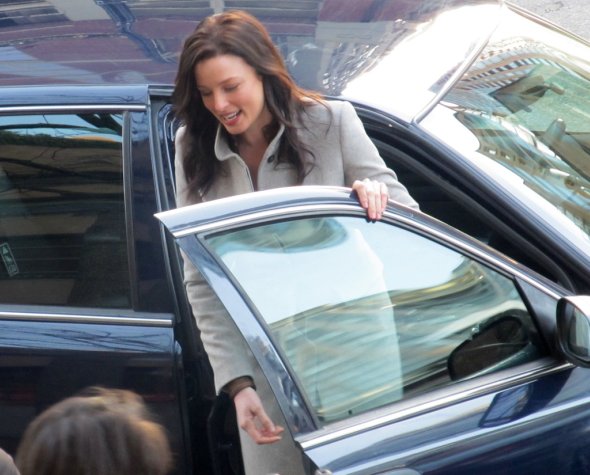 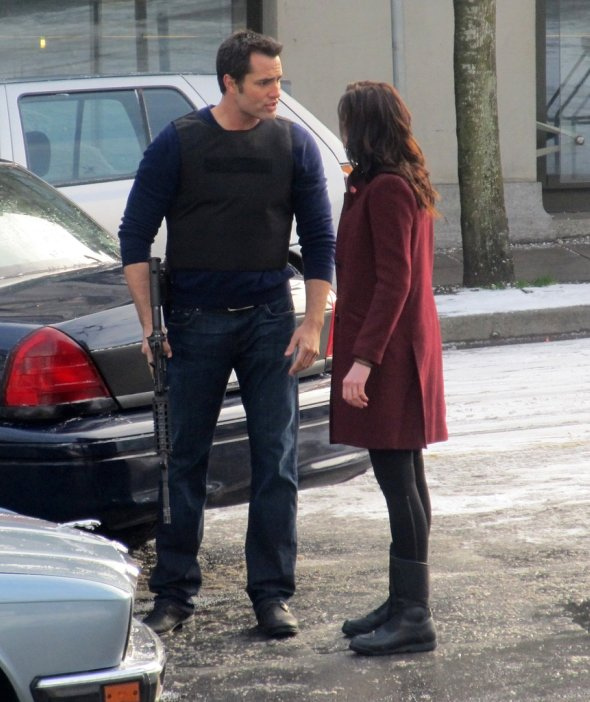 The 13-episode Primeval: New World, which will air on SPACE in Canada and ITV in Britain, is also about the future and the past, but this time it's dinosaurs not terrorists who are suddenly appearing and causing havoc in downtown Vancouver, Stanley Park and dare we hope, Yaletown. Like the original British series Primeval, the Vancouver spinoff is about a team of animal experts and scientists who must battle these creatures who enter our world though temporal anomalies, aka time portals. The real fun will be seeing these CGIed creatures running amok in your neighbourhood on TV.

I found the upcoming Primeval: New World season premiere filming in Stanley Park during a west coast windstorm which blew off a branch the size of a tree near set. I thought the branch could be incorporated into the show as something left in the wake of whatever creature was terrorizing our city that day but have a feeling that this critter flies. The next day on the other side of Coal Harbour I spied fan favourite Andrew-Lee Potts, aka Connor Temple from the original Primeval series, guest-starring with the Vancouver cast Niall Matter, who plays a rich Vancouver software developer, and Sara Canning, who plays a conservation officer, to investigate the death a parachutist. The week before, Primeval New World had filmed a dead drop fall off the roof of a downtown Vancouver office tower at night. 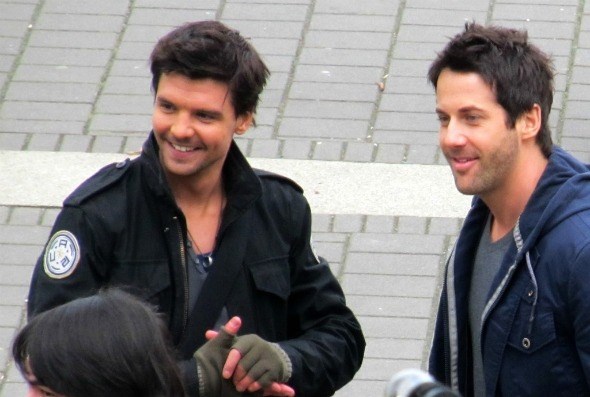 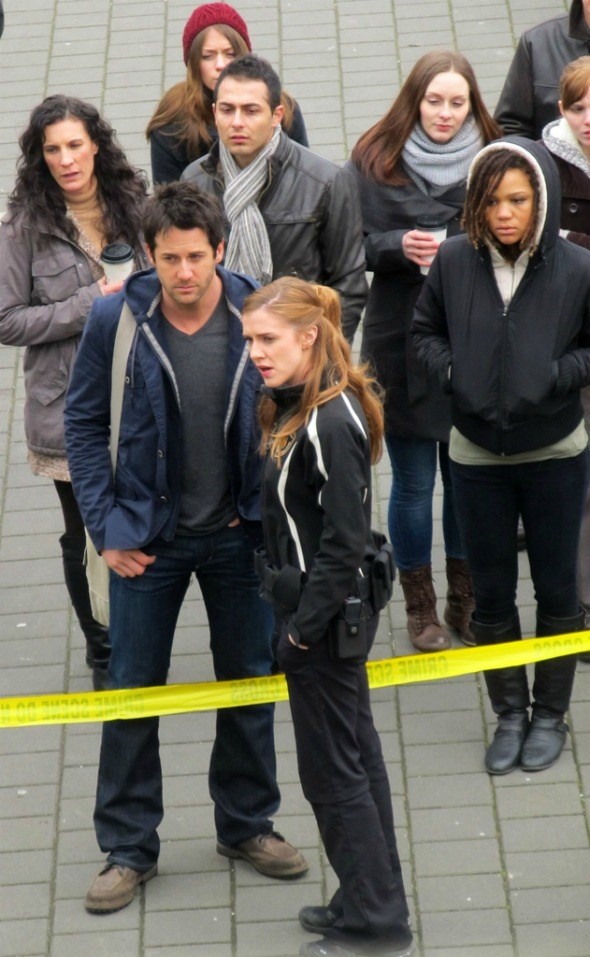 We're fortunate that the main cast of both series are frequent and funny tweeters. Continuum's Rachel Nichols and Victor Webster tweet back and forth all day long on set, revealing their various injuries from stunts and generally teasing one another with affection. 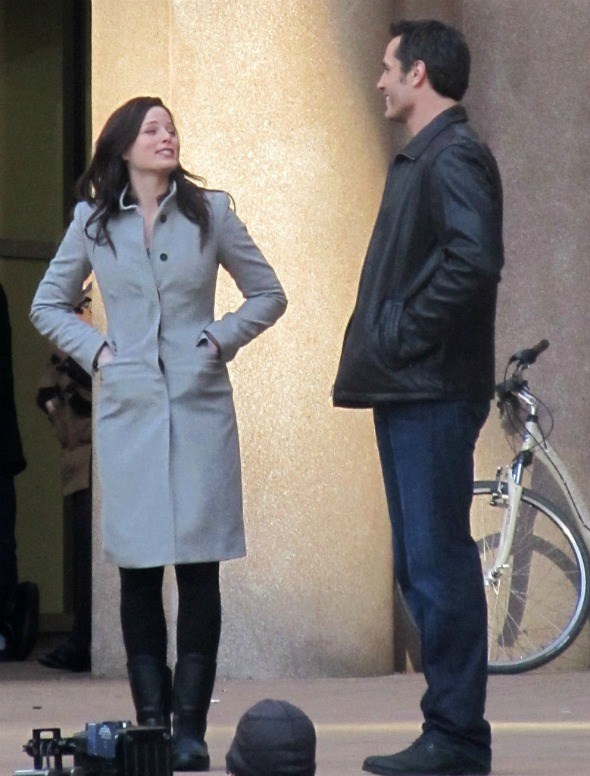 Primeval New World's Niall Matter (Eureka's bad boy physicist Zane) tweeted a photo of himself and Danny Rahim (East Enders) out for brunch at the Medina Cafe last month and then Rahmin tweeted a photo of Matter and himself staring at a tiny dinosaur captioned The Hunt is on.  And below is one of my photographs of Rahim and Sara Canning (The Vampire Diaries) laughing on set together. I expect all this camraderie to show on camera. 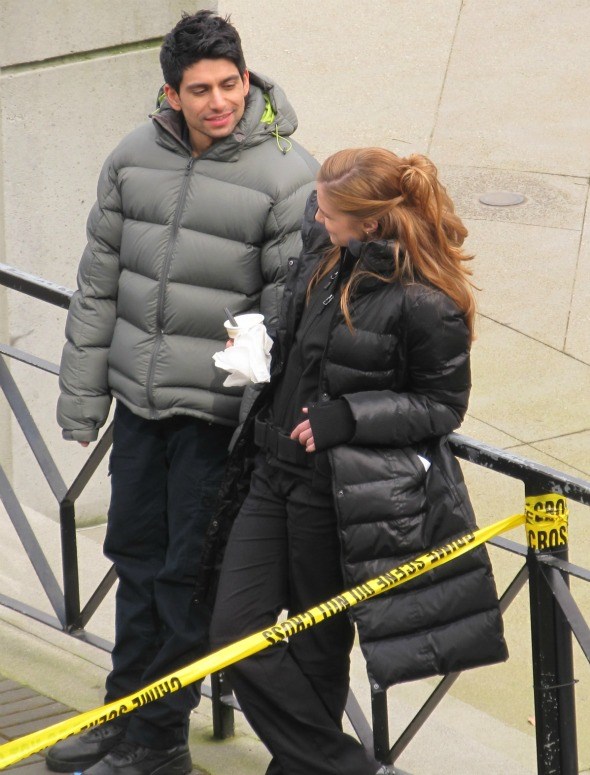 Behind the scenes of Primeval: New World it's like a Stargate reunion. Showrunner Martin Wood and special effects supervisor Mark Savela are just two of the names who came up through the long-running Stargate franchise. Wood went on to co-create Sanctuary with Damian Kindler and Amanda Tapping. And he brought Sanctuary writer Gillian Horvath on board with Primeval: New World too. The list goes on and on. Even the cast is local: Niall Matter and Sara Canning are both Vancouver Film School grads. It doesn't get more homegrown than this.

Except maybe at Continuum. Yes, Rachel Nichols is American but she's quickly immersed herself in our culture and can even be spotted cheering at Vancouver Canucks games on her rare night off. Stephen Lobo from Arctic Air is one of the terrorists and each episode promises to be a revolving screen of recognizable Canadian talent. After all, showrunner Simon Barry is a University of British Columbia film grad. And Canadian-born Jon Casser of 24 fame directed the first two episodes. 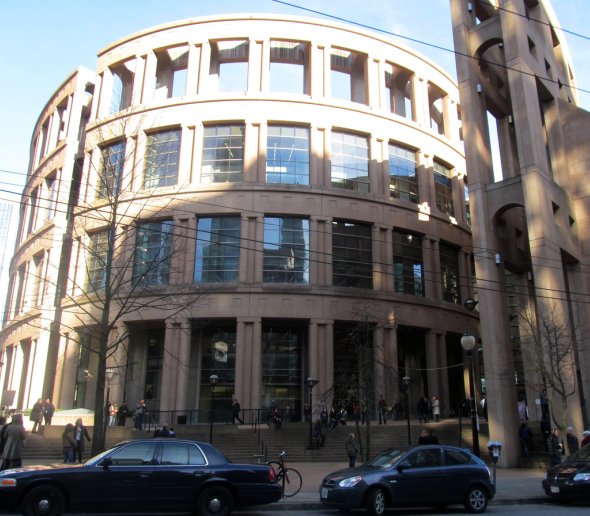 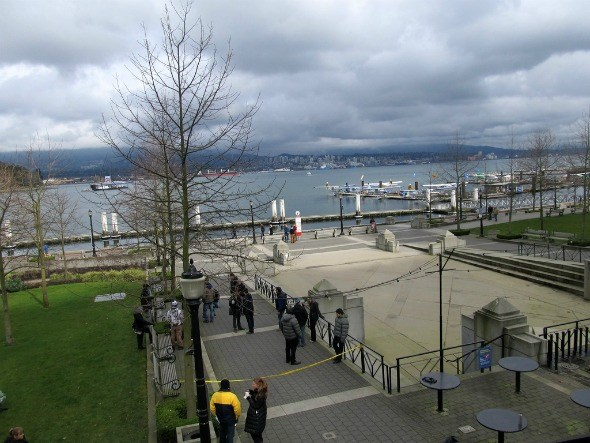 I will write more about Continuum and Primeval: New World in my #YVRShoots series, but wanted to give you a heads-up ahead of Fan Expo this weekend.

Be sure to check out both presentations on Saturday.